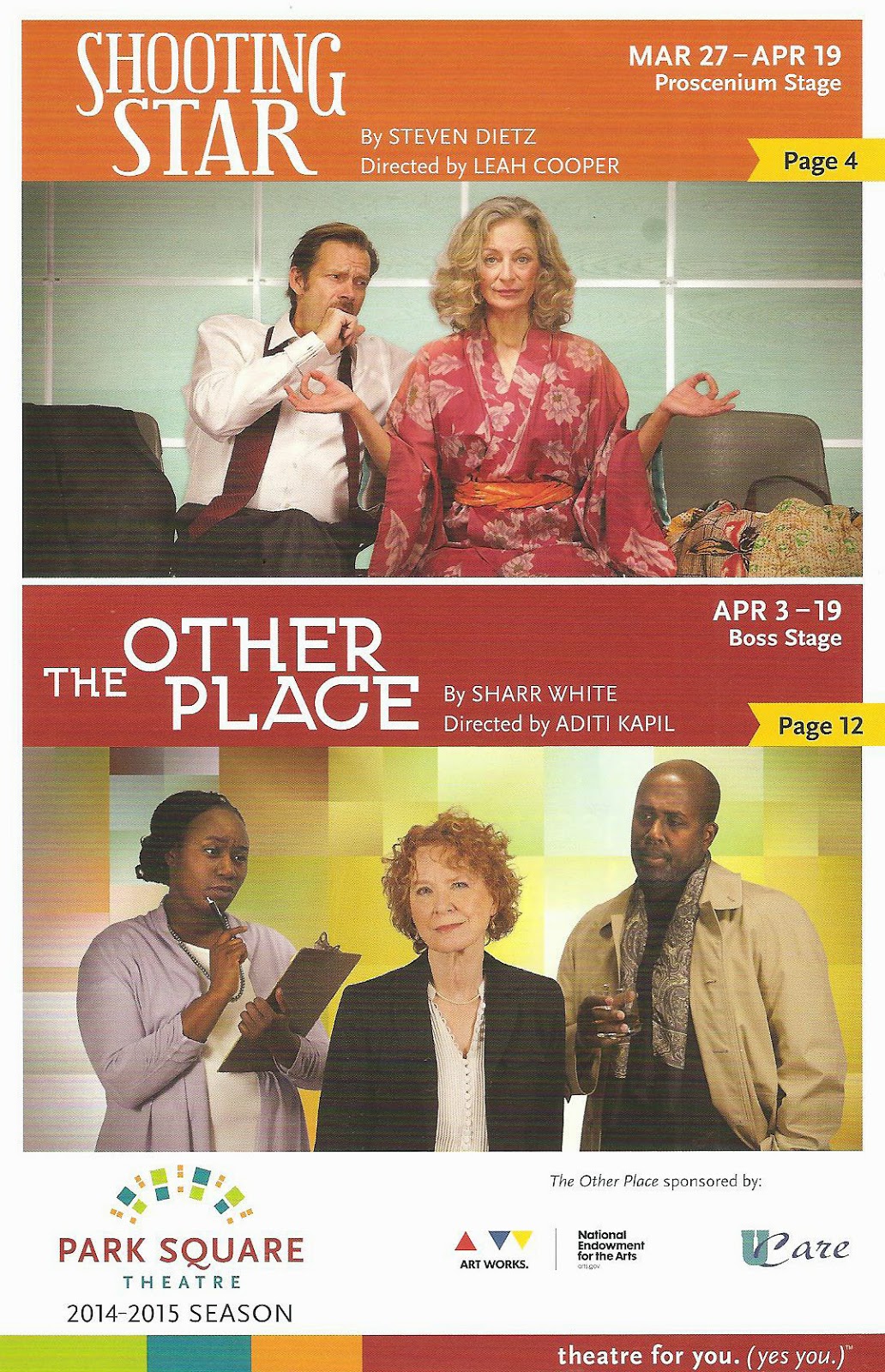 A chance meeting with an ex-lover at a snowed-in airport, the opportunity to say all the things you couldn't say when things ended 25 years ago. Such is the premise of Steven Dietz's play Shooting Star, a two-hander now playing on Park Square Theatre's Proscenium Stage. When the two hands are Sally Wingert and Mark Benninghofen*, with a premise as full of promise as this one is, you know you're in for a treat. And a treat this is - a funny, engaging, and bittersweet play that leaves you with a wistful feeling and a pleasant ache in the heart where long-ago memories are held.

It's 2006, and Elena and Reed meet at an airport in Canada in the middle of what could be the "blizzard of the century," never mind that the century is only a few years old. We learn from asides by both characters that they immediately recognize each other from a pretty serious relationship that ended 25 years ago, during the free-love '70s. Turns out love is not so free, as these two have definitely carry around some leftover baggage through the intervening years. Elena is still a bit of a free spirit, but could never find anyone better than Reed, who's now a conservative businessman with a difficult relationship with his wife and daughter. With both of their flights delayed and nowhere to go, the two are unable to avoid each other, and engage in some awkward small talk that leads to something deeper as the barriers of time come down. A trip to the airport bar means things get even more real, and Reed and Elena realize they still have a connection. But is it something worth pursing after fate has brought them together again, or is it something that's better left in the past?

Shooting Star is one of those real and messy love stories, perfectly encapsulating an intense and intimate experience between two people that may or may not result in "happily ever after," but is meaningful and true nonetheless (see also Once). Steven Dietz's clever choice to give both characters multiple asides in which they speak directly to the audience in a conversational way gives us insights into their thoughts, making us feel like confidantes and drawing us right into the story. Sally Wingert and Mark Benninghofen use the sharp writing to create two characters that feel very real; Elena and Reed are both flawed and very human. Mark and Sally are both incredibly natural on stage and have a beautiful chemistry that goes from prickly to familiar, bitter to loving. They're given a fantastic playground in Kit Mayer's set that is the perfect model of a cold, linear airport, familiar to travelers everywhere.

Shooting Star is a funny, tender, bittersweet gem of a play about closure, connection, and coming to terms with the past. It's a comedy with depth and heart (continuing through April 19).


*You can also see Mark Benninghofen (and James A. Williams, pictured on the bottom half of the playbill and currently appearing on Park Square's Boss Stage in The Other Place) on the big screen in the locally made movie The Public Domain, now playing at the Lagoon in Uptown.