"Anne of Green Gables" at Theatre in the Round 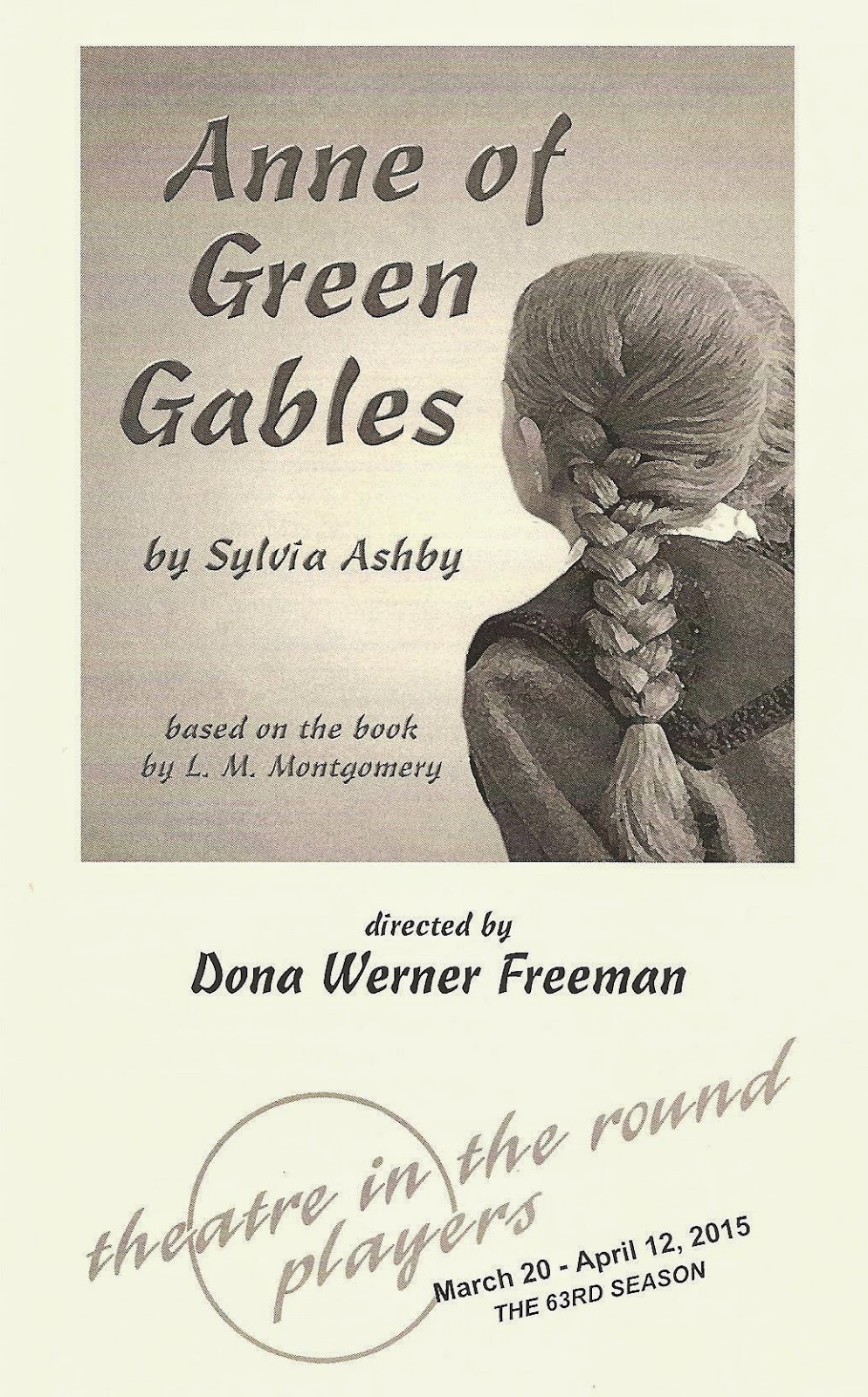 Anne Shirley, the spunky heroine of the Anne of Green Gables, the first of six books in the series by Lucy Maud Montgomery, is one of the most beloved characters in literature. What's not to love about the orphan girl in rural early 20th Century Canada with a flair for the melodramatic and a fierce determination to enjoy life and make the most of it? Theatre in the Round is currently presenting a stage version of the book, adapted by Sylvia Ashby, which brings our beloved Anne to life in a warm, funny, and poignant way.

The play covers four years in Anne's life, which at times feels a bit rushed, like it's trying to cram too much into two hours. Not having read the book(s) in many years and not being that attached to it (the Little House on the Prairie series was my childhood obsession, and OK maybe still is) I wondered how many of the books were adapted into the play. Turns out all of this happens in just the first book, presenting the full arc of Anne's original story (subsequent books take Anne through adulthood and into her 40s). We follow Anne's journey from when she is (reluctantly) taken in by a brother and sister on Prince Edward Island. Marilla and Matthew were hoping for a boy to help out on the farm, but got Anne instead. They soon fall in love with her indomitable spirit, although Marilla tries to impart her no-nonsense practical ways on the girl. Despite her red hair (the bane of her existence), Anne quickly makes friends at school and is an excellent student under the tutelage of her favorite teacher Miss Stacey, she of the fashionable puffed sleeves. Several years pass, filled with adventures, and Anne and her friends go away to school, after which Anne decides to return to her beloved Green Gables. She's all grown up now and ready to take on some new responsibilities, but her bright spirit remains.

The large cast does a fine job bringing the world of Avonlea to life on the small arena stage. Most fun to watch are the enthusiastic young actors playing Anne and her friends, several of whom are in high school. Most notably, sophomore Mabel Thomas is everything you could want in Anne - melodramatic and earnest and fiery and sweet. She pretty much carries the show on her young shoulders and does so admirably. She also has a nice chemistry with Jane Hammill's stern Marilla and especially Rod Kleiss' Matthew, who's wrapped around her little finger. Also amusing is Holly Windle as busybody neighbor Rachel Lynde, who occasionally pops up on the side of the stage as characters recite "Mrs. Lynde always says..."

With such a large cast, set designer Shannon Morgan has wisely chosen a fairly sparse stage. The in-the-round space has no walls or partitions, just a kitchen table on one side and a bed on the other, with divisions merely hinted at. A few benches and school desks brought in when needed subtly and successfully set the scene. The floor and sides of the round are covered with flowers, bringing a bit of the Anne's cherished outdoors in. (When told to say her prayers, Anne asks, "can't you just walk in the field, look at the sky, and feel a prayer?")

If you're a fan of the book you will most likely enjoy seeing Anne brought to life before your eyes (there were quite a few youngsters in the audience). And even if you aren't familiar with the books, Anne of Green Gables is a heartwarming, funny, endearing story of the joys and traumas, both small and large, of growing up. Playing weekends at Theatre in the Round through April 12.