"Nature Crown" by Theatre Forever at the Guthrie Studio Theater 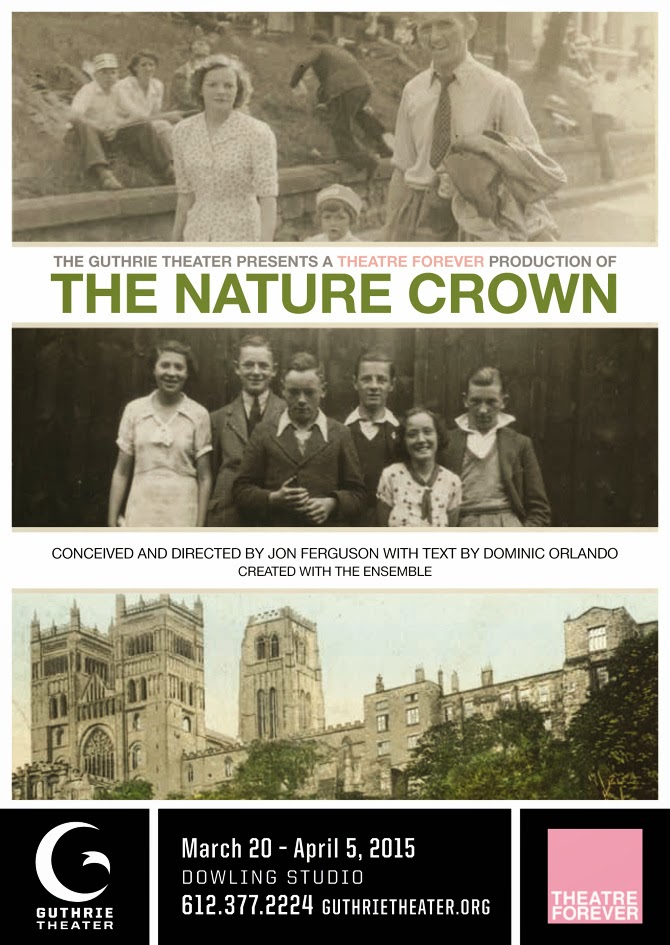 I went to see Theatre Forever's newest creation Nature Crown not knowing what it was about. I left the theater still not knowing exactly what it was about, except that it's lovely, delightful, innovative, poignant, creative, and incredibly moving. The original fairy tale deals with the ideas of home, place, and change, but I'll let creator and director Jon Ferguson explain it: "It's about returning to a source or place of origin, honoring that place and letting it go, all at the same time. It's about love and change and re-connection. And that's what I hope for everyone. Through the experience of this play I hope that this story and this place becomes yours. I hope that we find parallels between us, to better understand each other, and ourselves, in order to live better together."

The story centers around a typical working man named João (Diogo Lopes) who is fired from his job, sending him off on a life-changing adventure (or dream?) in a village on the other side of the woods. He meets a mysterious woman (Aimee K. Bryant) who he later learns is Nature or the Earth herself, and chases a boy (13-year-old Lorenzo Reyes) to a quaint little village preparing for a once in a century celebration, at which point everything is destroyed and life begins anew. After presenting himself to the King (Brant Miller) and Queen (Catherine Johnson Justice), João remembers the village and doesn't want it to change, so he believes the royal assistant Rupert (Tony Sarnicki) when he tells him he must slay a monster in the woods to prevent the village's destruction. Things don't go as well, but "this is a fairy tale, so everyone gets what they need." João returns to his life forever changed, with the memories of this place and this experience bringing a new energy and joy to his life.

But this plot summary does not even tell one-tenth of the story. This is one of those pieces that's difficult to put into words, because what is created in that in-the-round space by the 14 members of the ensemble, four musicians, and the six-member Artemis Chamber Choir* is beyond words. It's so creative, and playful, and physical, and fun, and unabashedly sincere and hopeful. The village is created by little houses mounted on backpacks, so of course the castle is a suitcase. It's England so there's lots of tea pouring and drinking. Two young villagers (Paul Rutledge and Ben Mandelbaum) learn to transform themselves into trees and logs and rocks. A mysterious backpacked man (Peter Lincoln Rusk) and his apprentice (Nick Saxton) help to guide the events as they're supposed to happen. Flower petals represent leaves and blood, depending on what's called for. Things pop up out of the floor when needed. A spoon is a recurring motif. None of it makes any sense, but somehow it all makes sense.

"Home is where the heart is," the saying goes. Or perhaps the heart is where home is. We all carry places around inside of us, places that meant something to us at different times in our lives. Places that we may never see again, or places that we may return to and find them not at all how we remember them. "You can never go home again," goes another saying, but this piece seems to say that we can carry the memory and spirit of that place inside us, to give us courage for what lies ahead.

If exploring the ideas of home and change and courage ("be brave or you'll miss everything") with music, movement, delightful props, heartfelt performances, and much theatrical innovation is intriguing to you, go see Nature Crown, and be reminded of those places that lie inside your heart (continuing in the Guthrie's Dowling Studio through April 4).

*The Artemis Chamber Choir performs in the lobby of the Dowling Studio before the show, and the acoustics of the space combined with lovely harmonies create something quite haunting.