"Into the Woods" by Theater Latte Da at the Ritz Theater 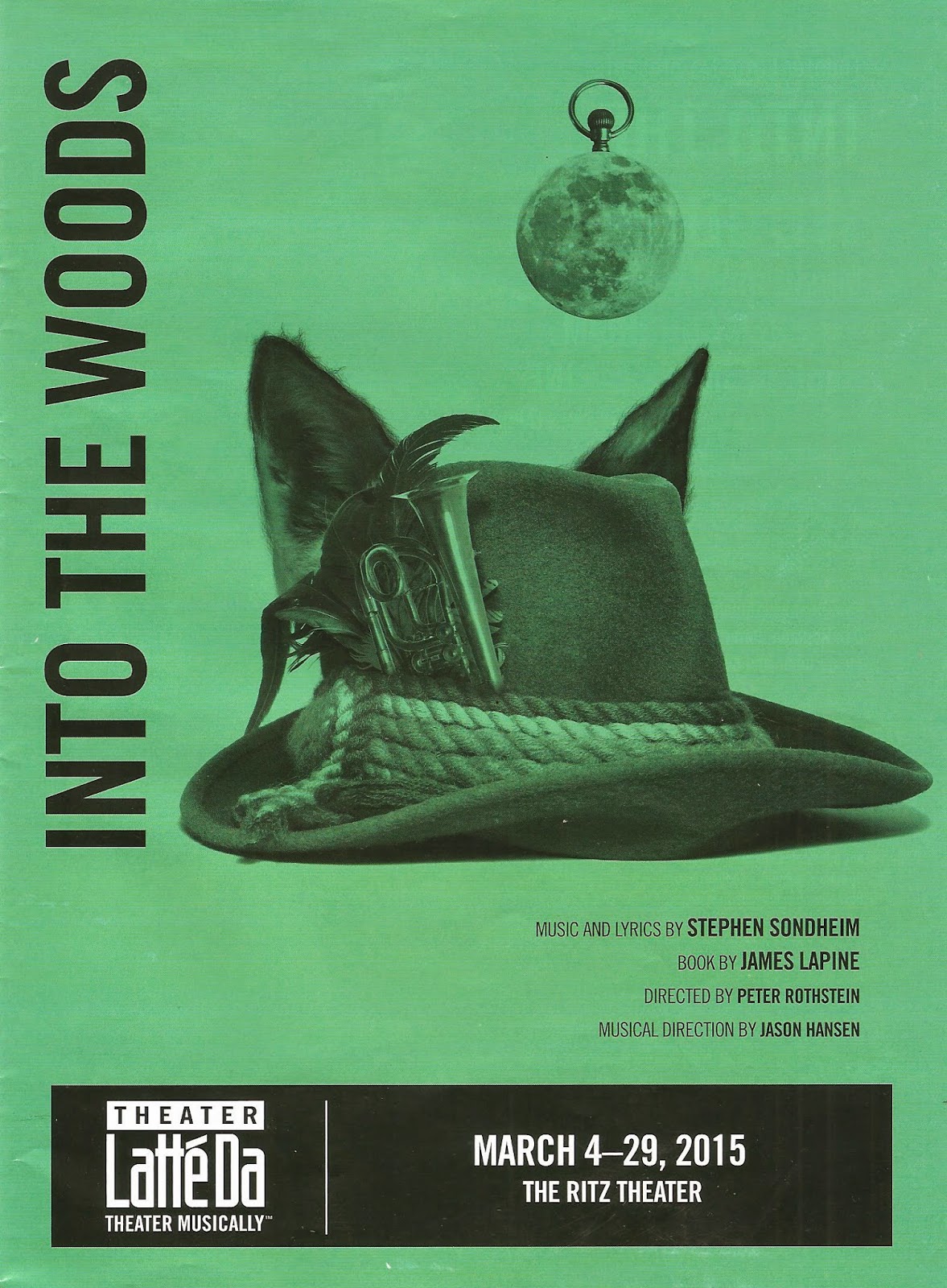 I first saw the Stephen Sondheim/James Lapine musical fairy tale mash up Into the Woods four years ago, and have seen it several times since then, including the recent star-studded movie. Every time I see it I like it more. I think Sondheim is like Shakespeare in that it has a very specific rhythm and cadence to it that takes a minute to get used to, but the more time you spend with it, the richer and deeper it becomes. Such has been my experience with Into the Woods, so I was primed to love my favorite theater company Theater Latte Da's production of it. But it has exceeded my expectations, and even Sondheim newbies will be enthralled by this brilliant staging of a brilliantly written musical. Latte Da has pared down this big Broadway musical to something that feels intimate and innovative, using a small cast and orchestra, and inventive and thoughtful choices in every detail of the production. This, my friends, is Broadway re-imagined, or at least how I would like to see Broadway re-imagined. Simply put, it's sublime.

Where better to set Into the Woods than in Germany, birthplace of fairy tales as we know them? And why not make it a beer garden for extra fun and specificity? The stage is set the moment you walk into the lobby of the charming Ritz Theater, where a sign reading "Theater Latte Da präsentiert Ab in den Wald" hangs over the concession stand, which sells delicious Bauhaus beer and pretzels, or as the German nerd in me likes to say, Bier und Bretzeln (yes, I was the one on Opening Night wearing the Austrian hat I bought in Salzburg 20 years ago when I studied abroad there). The stage itself has been laid bare with no walls or backdrops; you can see the whole stage area, back to the unfinished walls. There is no backstage, everything happens in front of you, including costume changes and sound effects, which are cleverly created by the cast. Trees are constructed by what looks like wooden fencing spiraling to the sky, and after the giant comes through, half of the trees fall creating obstacles that each character maneuvers in their own specific way, athletically, carefully, or clumsily (set design by Kate Sutton-Johnson). All prop pieces look organic to the scene, including chandeliers made of antlers and the most adorable cow, constructed from an old-fashioned buggy with a wooden pail for a head and a piece of rope for a tail, and a little bit of imagination (properties design by Benjamin Olsen). Actors walk out on stage RENT-like with the house lights still up, and then begin to tell the story, making the audience feel like we're all in this together.

Director Peter Rothstein has made a genius decision to cast just 10 actors in these 20 roles, and once again has chosen the perfect actors for each part, with clever pairings of characters to an actor. It's such a delight to watch the über-talented David Darrow transform from the hard-working earnest baker to a pompous and shallow prince in a matter of seconds as he doffs one hat and dons another behind a tree; or the young star-in-the-making Brandon Brooks kill Jack's mother as the steward in one scene and mourn her as Jack in the next; or Peter Middlecamp go from the evil stepmother to the charming prince and back again several times within one scene (not to mention his deliciously devilish wolf, Hollywood - you can keep Johnny Depp, I'll take Peter Middlecamp any day). Dan Hopman is a wonderful narrator and emcee, slightly detached and observing, until he's forced into the story. Britta Ollmann only has one role to play, Cinderella, but she does it beautifully. Kendall Anne Thompson and Shinah Brashears are excellent as the stepsisters as well as the witch's sheltered and absurdly long-haired daughter Rapunzel and the fearless and spirited Little Red, respectively. Kate Beahen is warm and human as the Baker's wife, and also climbs inside a tree to voice Cinderella's mother. Elisa Pluhar brings to life both Jack's exasperated mother and Little Red's doomed Granny. Last but certainly not least, Greta Oglesby is a commanding voice and presence as the witch, in both of her forms.

But this is Sondheim, so let's talk about the music. Music Director Jason Hansen on piano leads just two other musicians (on cello and wind instruments) in this sparse three-piece orchestra that, despite being a significantly trimmed down orchestration, leaves nothing to be desired. The ten singers all sound gorgeous, alone and in delicious harmony. There's not one false note, moment, or performance in the entire show. Listening to David and Peter duet as the pompous princes complaining about their women is the opposite of "Agony," in fact it's a highlight in a show that's one highlight after another. The "No One is Alone" quartet is poignant and beautiful, as is Greta's rendition of perhaps the most well-known song, "Children Will Listen." And any song that has all 10 cast members on stage singing and moving at the same time is the best. In fact, the cast never leaves the stage (no backstage, remember?), and simply sit in a chair on the side of the stage when not in the scene. Costume changes happen in full view of the audience, which seems to say "hey, we're putting on a show," and invites us to use our imagination to play along.

Speaking of costumes, Samantha Haddow's costumes beautifully suit the theme, with the aforementioned hats, lederhosen, peasant gowns, and most importantly, pieces that can easily be added or removed and instantly define the character.

Theater Latte Da's inventive and sublime interpretation of Into the Woods continues through March 29. If you're a fan of music-theater, it's a must see.