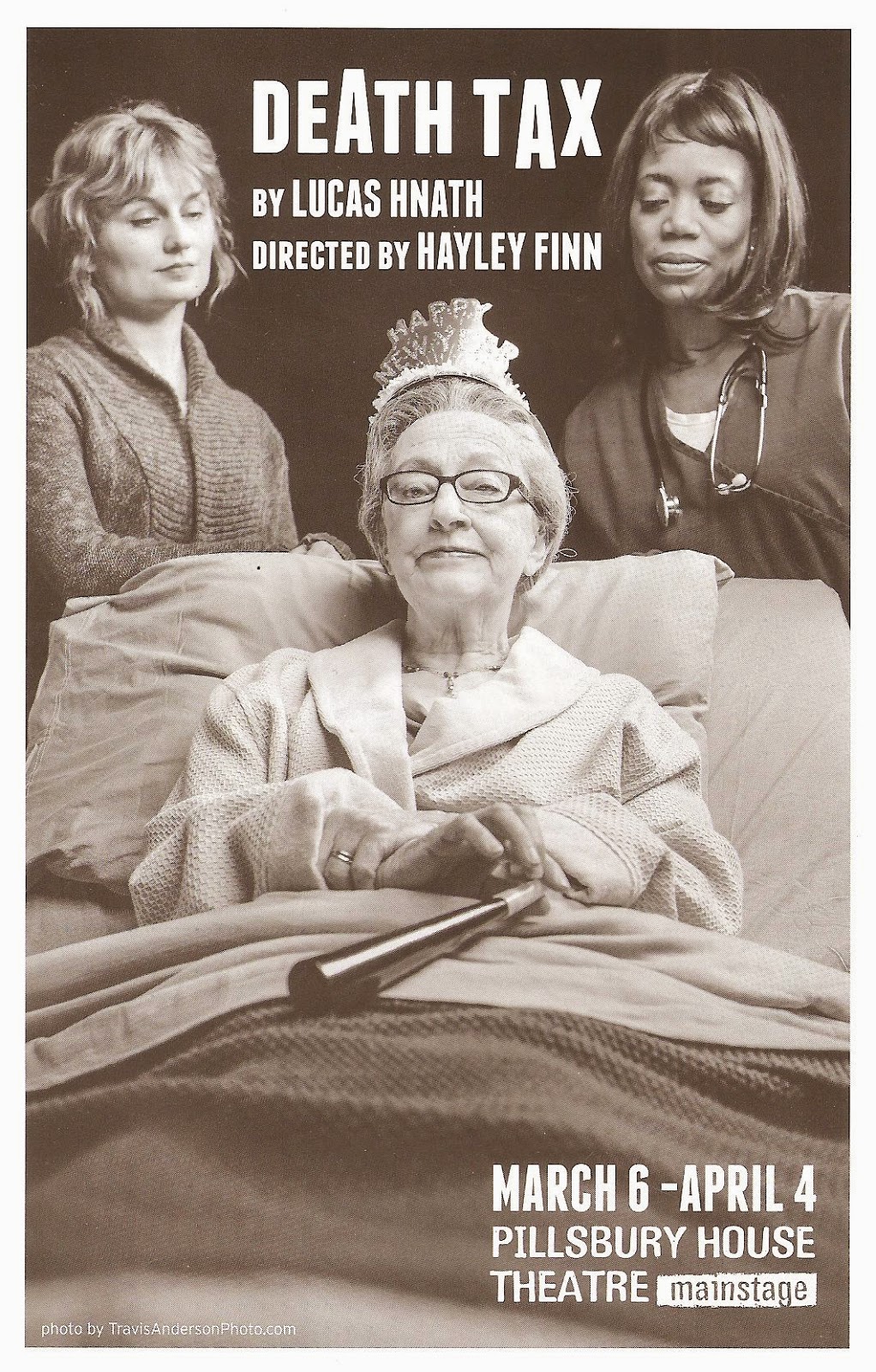 In a world with an aging baby boomer population and advances in medicine that see people living longer than ever before, the new play Death Tax is a timely look at the elderly and how we treat them. It's a fitting choice for Pillsbury House Theatre, which often produces timely and relevant work that connects to the larger community around them. In just five short scenes (nicely spelled out for us by playwright Lucas Hnath), with four actors typically in two-person scenes, and an extremely sparse set, this play brings up many issues around this topic but, like any good play, doesn't provide easy answers. Rather it provides much food for thought and conversation.

The playwright has written short introductions to the play and each scene, delivered by Regina Marie Williams. She tells us that this is a play with five scenes, and gives a brief description of the setting and characters, including her own, a Haitian nurse named Tina. The setting is a nursing home, where Tina cares for a wealthy woman named Maxine (Wendy Lehr, presiding over the first and last scenes and creating a full and complex character without ever leaving the bed). Maxine does not have a good relationship with her only daughter, to put it mildly, and suspects that she's paying Tina to speed her death along so that she can receive the full inheritance without paying the penalty of the new estate taxes in effect after the first of the year. Despite Tina’s reassurances, Maxine insists that this is what's happening, and offers Tina a great deal of money to keep her alive. Tina needs the money for a custody battle to bring her son back from Haiti, so she accepts, and enlists the help of her boss and ex Todd (Clarence Wethern). When Maxine’s daughter (Tracey Maloney) comes to visit, she tells a different story about her relationship with her mother. Things get complicated, Tina and Todd argue over the plan, but we never get to find out how it turned out. The last scene fast forwards twenty years; Maxine is still there, but her money has run out and the tables have turned.

None of these characters is completely likeable, but all are relatable in some way. In particular, I found Tina to be an extremely sympathetic character, I wanted her to succeed in getting her son back and building a life for the two of them. I don't blame her for taking the money; if you desperately needed money for your family and someone offered you two hundred thousand dollars, would you turn it down? In this play, as too often in real life, money is power, and these characters either have money and power or they don't, and do questionable things to hold on to them or achieve them.

Director Hayley Finn sets a great tone and pace for her excellent cast, in a play with dialogue that sounds natural, the way real people talk. John Francis Bueche's set is completely bare and colorless, the theater was even a bit chilly so that it felt like a cold and sterile institution. Blank gray walls center on a bed with neutral bedding; the only other furniture on stage is a desk on the left with a few papers.


One of the uniquely great things about Pillsbury House is that their post-show discussions include a community group that deals directly with the issues discussed in the play. For this play they're partnering with ArtSage, which brings art to senior citizens (see also Alive & Kickin'). They're also presenting workshops about heath care directives and estate planning, things no one wants to think about in relation to themselves or their family, yet it's vital that we do so (see Pillsbury House's website for more info).

Death Tax is a smart, funny, thought-provoking, well-written and well-acted play. It continues at Pillsbury House Theatre in South Minneapolis through April 4. If you've never been there, it's definitely work checking them out to see what they're all about. In addition to producing great theater, Pillsbury House also serves as a community resource center (for more info on this and other theater venues around town, check out my Venues page).