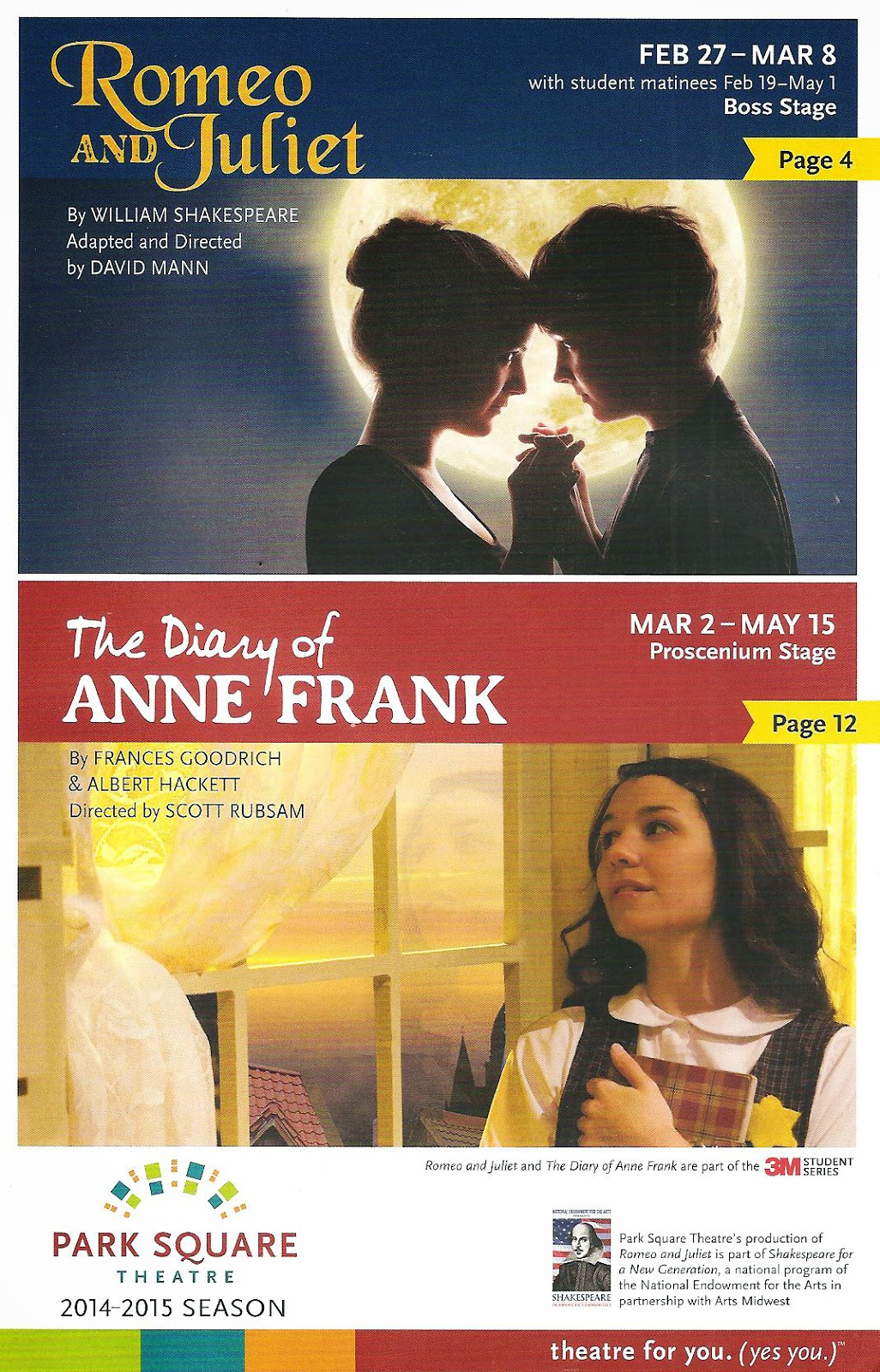 Romeo and Juliet is the ultimate ode to the all-consuming foolishness of young love. Who gets that better than teenagers? After all, Romeo and Juliet are teenagers themselves. Someone at Park Square Theatre must have made that connection, because they're currently producing a condensed version of Shakespeare's best loved romantic tragedy, mostly to student groups. But this isn't theater light, it's Park Square's usual high quality production with a fantastic cast. I was lucky enough to attend one of these student matinees (even though I'm many years removed from being a student), and was caught up by the story as much as the kids were. It's a pretty cool thing for young people to be exposed to theater like this, and as a bonus, they can return to Park Square for free if they bring an adult.

Director David Mann has adapted Romeo and Juliet into a succinct 90 minutes. I'm no Shakespeare scholar, but I have seen this play a fair number of times in various incarnations, and I can't identify anything that was cut, other than Romeo's encounter with Paris at the crypt. Characters like Paris and the never seen but much talked about Rosaline always felt extraneous to the story anyway, so it's smart to cut some of that out and focus on the star-crossed lovers. All of the famous lines are still there, as well as plenty of fight scenes, love scenes, and general tomfoolery (all of which appeal to the teen set). In fact, this adaptation is so successful it makes me think Shakespeare should always be 90 minutes long!

Michael Hanna and Aeysha Kinnunen are the epitome of young lovers with their impassioned facial expressions and physicality and their impossibly beautiful hair; they're quite the charming pair. Jason Rojas and Kory LaQuess Pullam are crowd favorites with their energetic frat boy portrayals of Mercutio and Benvolio, and Nate Cheeseman gets quite a few laughs from his crowd interaction as the servant Peter. Come to think of it, the entire cast is great at engaging the audience, speaking directly to them in their monologues. The adult set's not too shabby either. Zach Curtis is fearsome as Juliet's controlling father, Mo Perry is regal and aloof as her mother and stern and compassionate as the Prince, John Middleton is the lovers' only friend in the Friar, and Laura Esping is Juliet's loving Nurse and the Chorus. She also delivers an inspirational pre-show message to the audience about how theater is ephemeral and a joint creation between cast and audience. It reminded me of why I love theater and do what I do, and no doubt inspired a few new theater fans in the audience, as did the 90 minutes that followed.

Only a handful of evening performances of this fast-paced, intense, captivating Romeo and Juliet remain, but student matinees continue for the next two months. If you know a teenager or work with teenagers, contact Park Square to see how they can take part in the student program.