"Oliver!" by Theater Latte Da and Hennepin Theatre Trust at the Pantages Theatre 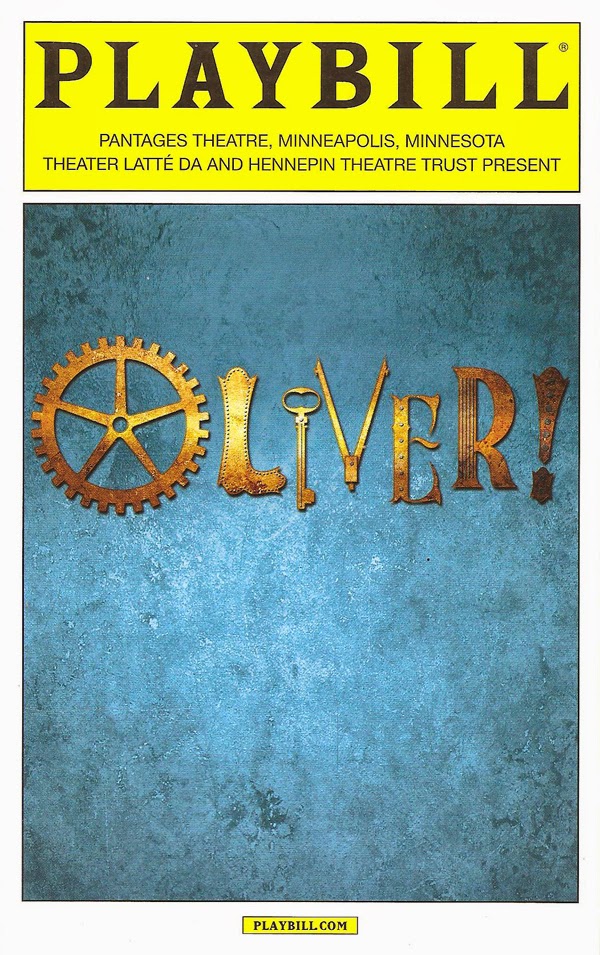 Theater Latte Da and Hennepin Theatre Trust have formed a beautiful partnership called "Broadway Re-Imagined," in which they combine the resources of the Trust with the creativity and innovation of Latte Da to produce a Broadway-sized musical with all local talent and that special Latte Da twist. After the powerful rock musical Aida and the brilliant Ivey Award-winning Cabaret, they return this year with Oliver!, the 1960 musical based on Charles Dickens' novel Oliver Twist. But don't let all those adorable moppets dancing around the stage and singing upbeat tunes fool you. Oliver! is not a light and fluffy happy musical, well, not solely anyway. It's also a dark and somber look at such serious issues as child abuse and neglect, the desperation of poverty, and violence. But fortunately, after all the death and darkness, the curtain call ends with a reprise of a happy number, so we can all leave the theater with that happy musical feeling. But perhaps we also leave with a deeper thought about the relevance and seriousness of what we just saw, wrapped up in a gorgeous musical theater package, to ponder further at a later date.

As you probably know from the book or one its many adaptations, Oliver is an orphan boy in 19th Century London. He's sold from the workhouse where he was left as a baby to a coffin maker, from whom he runs away. He joins a merry band of pickpockets, led by a man called Fagin who teaches his boys how to steal and makes sure they don't go hungry. Oliver is arrested on his first day on the job, and offered a better life. But Fagin and his partner in crime Bill Sykes worry that he'll snitch, so Bill kidnaps him and brings him back, with the reluctant help of his girlfriend Nancy. In a bit of an Annie situation, Oliver's true family discovers him with the help of a locket and attempts to get him back, but not without cost to Fagin's gang.

Oliver! has a wonderful score (by Lionel Bart) filled with many great tunes, several of which were familiar to me even though I'd never seen the show before: "Food, Glorious Food," "I'd Do Anything," and "As Long as He Needs Me" (a song that's much too beautiful for the ugly situation - a woman singing about standing by her abusive boyfriend). Other songs range also the poignant "Where is Love" to the peppy "Consider Yourself." And it goes without saying that the music in a Latte Da production sounds fantastic, in the hands of this excellent ensemble cast (which includes the Minnesota Boychoir as the workhouse orphans) and the six-piece orchestra in a traditional pit, led by Latte Da's resident Music Director Denise Prosek.

It also goes without saying in a Latte Da production that it's perfectly cast. Director Peter Rothstein has once again chosen the right actors for each part, and guided them all into wonderful, specific, imaginative performances. Perhaps most importantly, he's found a sweet and pure Oliver Twist in sixth grader Nate Turcotte, with a voice to match. There were some technical issues with his mic on opening night and he handled it like a pro. All of the kids in the show, who range from tiny to teens, are so stinkin' cute! They perform Michael Matthew Ferrell's lively choreography with such energy and spirit it makes me tired. Ah, youth! A standout among them is Alec Fisher (who already has a pretty lengthy bio in Twin Cities theater at the ripe old age of 14) as the charming rapscallion known as The Artful Dodger.

The adults in this show aren't half bad either. James Ramlet's deep and commanding voice makes Mr. Bumble a figure to be reckoned with, and plays nicely off of Lolly Foy's Widow Corney. As Nancy, Lauren Davis has a beautifully powerful voice and turns "As Long as He Needs Me" into a desperate cry for love. In a role that's the complete opposite of the bumbling dad he played in A Christmas Story at the Ordway just a few months ago, Dieter Bierbrauer is downright menacing as the cruel and violent Bill Sykes. There are really too many delightful performances in the ensemble by favorites and newcomers alike to mention them all, but suffice it to say there's something wonderful going on wherever you look on the crowded stage.

I've saved the best for last - the divine Bradley Greenwald. I don't have enough words to describe how amazing he is, in everything he does and in this role specifically. His Fagen has a mischievous spirit but also a depth and humanity; despite the fact that he's using these boys, he seems to have real affection for them. Bradley turns "Reviewing the Situation," in which Fagen ponders leaving the life of crime, into a real ethical dilemma. "Pick a Pocket or Two" is just delightful and fun, but with a few tender moments as he puts Oliver to bed. From the moment Bradley appears on stage (which is really when the show takes off) to when he slowly exits to a new life at the end of the show, he's just an absolute delight in every moment. And he performs some pretty astounding magic tricks too!

The "Broadway-sized" part of the show comes into play with the sets (by Rick Polenek) and costumes (by Christine A. Richardson), which are a feast for the eyes. Both have a steampunk flair, but not in an obnoxious way that takes away from the story or the setting in 19th Century London. Gears and clockwork appear on the massive set pieces that include various stairways and ladders connecting the two levels, and a bridge that lowers from the ceiling. Fagin's boys are dressed in colorful rags, and the women are adorned in bustles, flounces, and outrageous hairstyles.

Theater Latte Da and Hennepin Theatre Trust's "Broadway Re-Imagined" series is a great way to experience what we think of as "Broadway" theater, right here on Minneapolis' Hennepin Avenue featuring our amazing local talent. I love New York City and Broadway, but in my unbiased opinion, they've got nothing on the Twin Cities in terms of the quality, breadth, and depth of theater. Minnesota can do Broadway too! Oliver! continues Thursday through Sunday at the Pantages Theatre through March 1 (if you're thinking of bringing little ones, just make sure they're old enough to handle a couple of brutal onstage deaths - spoiler alert!).