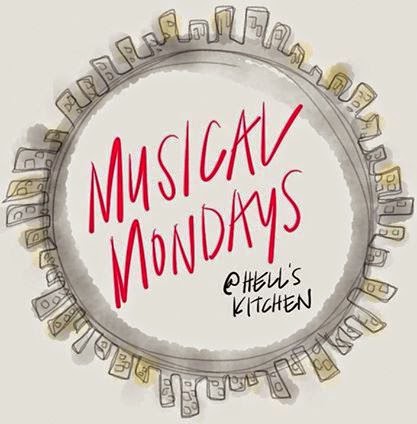 Musical theater loving friends, if you're not at Hell's Kitchen on the first Monday of the month, you are missing out. This is when Sheena Jansen and Max Wojtanowicz gather a few of their friends, who just happen to be among the most talented musical theater artists in town, for a little cabaret show. They've been doing it for over two years now, and it just keeps getting better and better. Each month has a theme, and this being February, the theme for this month's show was love. And as much as I love hearing my favorite musical theater songs, I also enjoy the choices made by this crew that are perhaps a bit more obscure. It was a fabulously entertaining night of musical theater, and it also served as a preview for shows to come this spring and summer. Read on for highlights and to find out where you can see the cast on stages around town.

This month's performers are a veritable Who's Who in the local musical theater scene. In addition to hosts Max and Sheena, performers include Aly Westberg O'Keefe and Dominique Wooten from last fall's brilliant production of Next to Normal at Bloomington Civic Theatre; two of the Andrews Sisters from History Theatre's Christmas of Swing, Ruthie Baker McGrath and Jen Burleigh-Benz (whom you may also know as Snow White from last fall's delightfully irreverent fairy tale Disenchanted); Radames/Joseph/et al. Jared Oxborough; and everyone's favorite, who's been in too many wonderful shows to recount here, Bradley Greenwald. They performed solos, duets, and group numbers, all accompanied by the maestro Andrew Cooke on keyboard. The show lasted about two hours, with a brief intermission, with food and bar service available throughout the night. It's also a fun place for people watching, as over half of the audience are theater people.

Highlights of the show include:
The cast's upcoming shows (click on show title for more info):

And that's it for this month, folks. The next Musical Mondays takes place on March 2 and will feature the music of Cy Coleman (I know, I don't really know who that is either, so this one is sure to be educational as well as entertaining!). "Like" the Musical Mondays Facebook page for updates and more information.