"Christmas of Swing" at the History Theatre 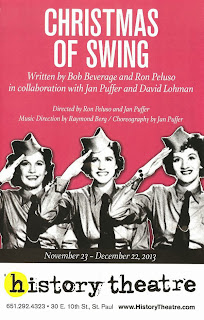 The holiday season has begun, at least on theater stages across the Twin Cities. Since I was out of the country for the opening of the Guthrie's A Christmas Carol this year, my first taste of Christmas (other than the bitterly cold weather) is History Theatre's WWII-era musical review Christmas of Swing, featuring the Minnesota trio The Andrews Sisters. The return of this popular show is a fun and peppy showcase of 40s-era popular music (also featuring appearances by Bing Crosby and Danny Kaye), that incorporates real letters from WWII soldiers, paying homage to our veterans of this and other wars.

For the most part Christmas of Swing is a light-hearted show, with a few somber moments acknowledging the hardship of the soldiers. But The Andrews Sisters’ job was to entertain and uplift, not wallow in the sorrows of war, and that they do in abundance. The play, written by Bob Beverage and Artistic Director Ron Peluso, is set at a dress rehearsal for a 1944 Christmas Eve show at a VA Hospital for wounded soldiers. This allows us to see all of the great numbers, as well as witness the banter between the sisters and their band and manager between songs. It also has the light and easy feel of a dress rehearsal; the efforts of the cast do not seem labored, but loose and effortless.

Some highlights of the show are:
The History Theatre’s Christmas of Swing, playing now through December 22, is a great choice for a holiday show this year. Filled with the Christmas spirit (which I for one am not quite ready for, until Thanksgiving is over and/or we get our first big snowfall), humor, great songs and dancing, an energetic and entertaining cast, and respect for and celebration of vets, it’s a fun and feel-good show.