"Wonderful Town" by Skylark Opera at the E.M. Pearson Theatre 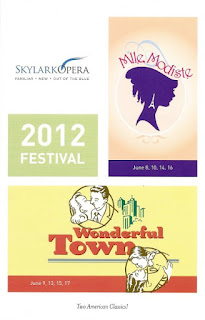 This is my second year attending Skylark Opera's summer festival, and I quite enjoy it. It introduces me to classical musicals that I've never seen (or in this case, heard of), which is a great thing for my continued musical theater education. Skylark follows last year's On the Town with another classic Bernstein/ Comden&Green collaboration - Wonderful Town. In addition to the similar names, both are traditional musicals set in New York City, with slightly dated stories but great music (you really can't go wrong with a Leonard Bernstein musical). This year's show features many of the same actors as last year, which in this case is a good thing. It's another well done production of an American classic.

Wonderful Town follows two sisters from Ohio as they move to NYC to pursue their dreams, one as an actor, the other as a writer. They rent a run-down studio apartment on Christopher Street in the West Village, where they meet many interesting characters. They encounter several obstacles to fulfilling their dreams, but this being a 1950s musical (the action takes place in 1935, but the musical was first produced in 1953), they eventually overcome and are successful in life and love. (As Neil Patrick Harris sang at the Tonys, wouldn't it be nice if life were more like theater!)

A few of my favorite things:

If you're interested in classic musical theater and opera, be sure to check out Skylark Opera's summer festival, playing for one more week at the E.M. Pearson Theatre on the Concordia University campus in St. Paul. The festival also includes the opera Mlle. Modiste, which I don't plan to see because opera's not as much my thing, and I have a hard enough time seeing all of the musicals and plays I want to! (But you know what Stephen Sondheim says about the difference between opera and musical theater...)