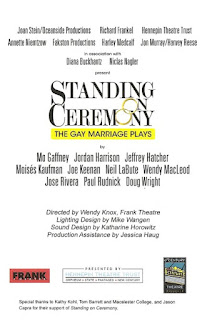 Planning a wedding. Writing your vows. Pre-wedding jitters. Pressure from one’s parents to get married. The loss of a loved one. All of these things are associated with a common milestone in life – getting married. The one tiny difference in the series of short plays called Standing on Ceremony: The Gay Marriage Plays is that the couples living through these common experiences are same sex-couples. But the emotions conveyed in this funny, touching, and at times heart-breaking play are universal human emotions that everyone in the audience can related to, no matter their sexual orientation or marital status.

Standing on Ceremony: The Gay Marriage Plays began as a series of benefits in L.A., continued Off-Broadway last fall, and is now being produced in theaters across the country. Nine playwrights contributed to the work, and their collective body of work is impressive, including some plays I’ve seen recently: I Am My Own Wife (Doug Wright), Compleat Female Stage Beauty, What’s the Word For (both Jeffrey Hatcher), reasons to be pretty (Neil LaBute). Wendy Knox of the innovative  directs six talented local actors who portray a variety of characters in the nine stories. In one a couple is writing their vows, and discovering that the traditional words don’t really apply. Another is in the airport on their way from L.A. to (of all places) for a hometown wedding and coming to terms with the gravity of what they’re about to do. A mother pressures her single gay son to find a husband, because all of her friends' gay kids are getting married now that it’s legal. A heterosexual couple amusingly deals with the possibility that the husband is gay and worry that their son may follow in his father’s footsteps. A crazy woman begins hearing voices in her head and feels that her traditional suburban lifestyle is being threatened. A man delivers a heart-wrenching eulogy for his partner of 40 years. And finally, a happy couple celebrate their union with all of their friends.

About that talented cast of six. Jim Lichtsheidl (recently seen in the delightful fairy tale Vasa Lisa with Ten Thousand Things) is always a delight to watch, especially when he gets to play several characters in one piece. Shanan Custer brings her very funny style to stories both serious and ridiculous (the aforementioned crazy woman, in a hilarious monologue). Shawn Hamilton (Ragtime and Avenue Q) and Aimee K Bryant (Hairspray at the Chan) unfortunately don’t get to sing, but they do play a hypocritical evangelical couple determined to stay together despite her husband’s indiscretions and scandals. Mark Rhein is the man whose wife tells him he has a “gay sense of humor,” and in the most moving vignette, talks about his 40-year love story. Last but not least, Laura B. Adams is strong and funny as the Jewish mother and a woman planning a wedding, something she never thought she'd do.

Standing on Ceremony: The Gay Marriage Plays is playing at the newest of the Hennepin theaters – the New Century Theatre in in downtown . It’s the first time I’ve been there and I quite like the space, which includes little cocktail tables among the seats in the audience, reminiscent of Hennepin Stages (Hey City Theater) down the street. The plays are staged very simply staged, with a row of chairs on the stage and a few tables to the sides. The actors occasionally hold scripts; its more like a reading than a fully staged production.

I very much recommend this show (it runs for two more weekends). It’s an entertaining evening of theater that tells universal human stories, and it might get you thinking and talking about the subject of marriage equality. Which is something that we as Minnesotans need to think and talk about in light of the upcoming vote on the Marriage Amendment. For more information on that check out Minnesotans United for All Families.