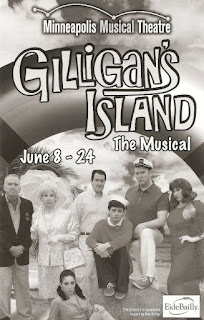 I topped off my four-musical weekend (which also included the ridiculously fun Xanadu at the Chanhassen, the classic Bernstein musical Wonderful Town by Skylark Opera, and a reading of the new musical Heading East by Theater Mu and starring Tony-winner BD Wong) with  Minneapolis Musical Theatre's Gilligan's Island: The Musical. It was like the whipped cream on top of the ice cream sundae that was my weekend: light, airy, and fun, not a whole lot of substance but a pleasant ending to an incredible weekend. In addition to being a theater junkie, I'm also a TV junkie and grew up watching classic sitcoms like Gilligan's Island, so this show is right up my alley.

Gilligan's Island: The Musical is pretty much exactly what you would expect (which isn't surprising considering it was written by the creators of the TV show). The same seven castaways, the grass huts, the familiar outfits, the sitcom predicaments. Only with music! The cast is great; everyone is perfect for their roles and gamely jumps in with both feet. Ryan Levin is appropriately adorable as the well-meaning but not so smart Gilligan, and Ryan Grimes is very Skipper-like. Joe Hendron is perhaps my favorite character, the Professor, who has a solution for every problem, except how to get off the island. Rebecca Gebhart is the sweet Kansas farm girl, and Angela Fox is the sexy, slinky movie star Ginger. Finally, Marlin Rothe and Joyce Norman have the accents and attitudes down pat to play Mr. and Mrs. Howell.

I know I often complain about movie and TV show adaptations taking over Broadway, but this isn't Broadway. And this show doesn't try to be more than it is - a fun, nostalgic homage to a classic sitcom. If you loved watching Gilligan's Island, you'll love this show (playing now through June 24). Surprisingly, this is the first Minneapolis Musical Theatre production I've seen. For whatever reason I've never quite made it to any of their shows. Now that I've "discovered" them, I'll definitely be back!