"By the Way, Meet Vera Stark" at Penumbra Theatre 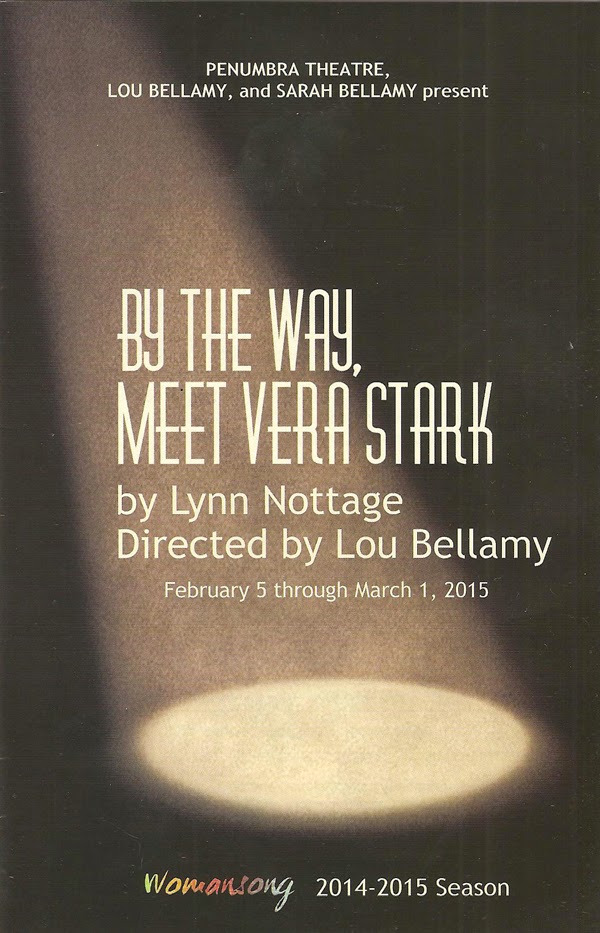 In By the Way, Meet Vera Stark, now playing at Penumbra Theatre as part of their "Womansong" season, the title character is a black actress in 1930s Hollywood who gets her big break playing a loyal slave in an antebellum Southern melodrama (think Mammy in Gone with the Wind, for which Hattie McDaniel became the first African American to be nominated for and win an Academy Award). She imbues the stereotypical role with as much humanity and depth as possible, and so begins a long and successful career, until she mysteriously disappears from the spotlight. Much like Hattie, who famously said she'd rather play a maid than be one, Vera is a controversial figure because on the one hand her characters perpetuate the stereotypes seen in movies, but on the other hand she makes her characters as real as possible and has built a successful career for herself and opened doors for black actors in Hollywood. The play examines these issues in a funny, entertaining, innovative way, jumping across time and using video of Vera's first movie.

The first act of the play takes place in 1933, where we meet Hollywood starlet Gloria Mitchell and her former Vaudeville partner Vera, who works as her maid while trying to break into pictures (doesn't everyone who lives in Hollywood want to be in pictures?). Gloria is up for a role in The Belle of New Orleans, and Vera is desperate to be cast in it as well. Gloria is too preoccupied with her own life to help her friend, so Vera takes matters into her own hands when the studio head and director come to Gloria's apartment, playing into their stereotypes and getting cast. The second act jumps forward in time 70 years to a seminar about the legacy of Vera Stark in which the panel discusses her life and work while watching clips from the movie (pre-recorded video) and a 1973 talk show appearance (live reenactment) that reunites Gloria and Vera.

The play verges on camp at times as it spoofs old Hollywood and TV talk shows, which is great fun, but still manages to make the characters, especially Vera and her friend Lottie, real and grounded people. This cast is divine, they all play their role(s) to the hilt under the direction of Lou Bellamy. Crystal Fox's Vera is smart and determined, someone it's easy to root for as she goes after her dreams, and then becomes a larger than life version of herself after 40 years in movies. Norah Long is perfection as she plays several different sides of Gloria - the image of a Hollywood starlet that the studio wants her to be, the real person who swears and drinks, the selfish and thoughtless friend, and Gloria's dying Southern belle character in the movie. Greta Oglesby steals every scene she's in as Vera's friend Lottie, especially when she sings her mournful slave song to win a part. Jamila Anderson is fun as Anna Mae, who's trying to pass as Brazilian to win a man and a part, and the modern day tough-talking poet on the panel. This play really is about these four women, but the men are great too - Kevin D. West as Leroy, who befriends Vera and helps her in her quest, Peter Moore as the studio head and the Donahue-like talk show host, and Paul De Cordova as the eccentric director and a trippy '70s British rocker.

The production elements on this play are as divine as the cast. Mathew LeFebvre's gorgeous costumes span the range from glamorous '30s Hollywood, to real working women in that era, to the fabulously colorful '70s, and modern day specific types. C. Lance Brockman's versatile set easily transforms from Gloria's luscious apartment to Vera's working class apartment to a studio back lot with just a change of furniture and the flipping of panels in the walls. A really fun feature of this play is that we actually get to see the movie that's talked about so much. A quite lengthy clip of The Belle of New Orleans is played on a big screen in which the four women play roles in this deliciously melodramatic movie.

By the Way, Meet Vera Stark is a really fun, entertaining, funny, beautiful to look at play on the surface, but on a deeper level says some important, thought-provoking, and relevant things about black actors in Hollywood, then and now. And it's quite timely, coming a few weeks after the announcement of this year's Oscar nominations, which included not only the snub of the film Selma, but the first all-white group of nominated actors since 1998. Hollywood, and we its audience, still have much to learn from Vera Stark (playing through March 1).