"A Midsummer Night's Dream" at the Guthrie Theatre 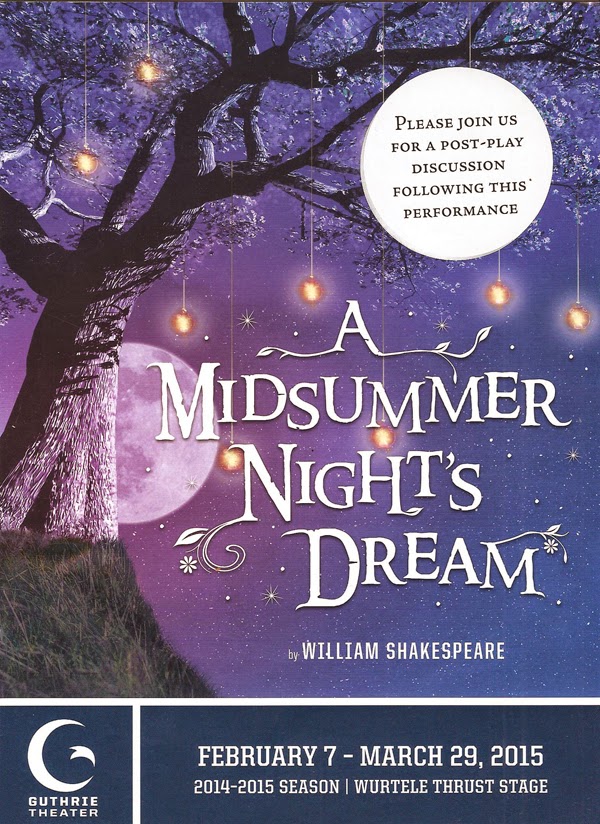 Yesterday I sat on the famous thrust stage of the Guthrie Theater and watched a bunch of soldiers, lovers, and fairies dance, sing, fly, converse, love, hate, and generally cavort around in a bare circular space. Or was it all a dream? Such is the Guthrie's latest production of perhaps Shakespeare's best loved romantic comedy, A Midsummer Night's Dream, that after three hours of spellbinding theater, you're not quite sure if what you saw just happened, or perhaps, as Puck suggests in his epilogue, it was all just a dream. Artistic Director Joe Dowling has returned to an old favorite in his final season at the Guthrie, assembling a gorgeous and talented cast of local favorites with a few national talents thrown in. It's no wonder that he returned to this show (a version of which was last seen in 2008); this Midsummer is a dream of a production, with plenty of spectacle in the form of dancing, flying, singing fairies, humor in the form of typical Shakesperean hijinks, and heart in this sweet romance that ends with a neat happily ever after. Everything about it is truly a delight.

The plot of Midsummer is familiar to most theater-goers, being a frequently produced play. Lysander loves Hermia and she him, but her father Theseus, duke of Athens, has betrothed her to Demetrius, who also loves her although she does not return his love. Lysander and Hermia vow to run away together, and Helena, whose love for Demetrius has recently been rejected, tells him so that he will follow, and she in turn follows him. As we know, strange things can happen when you go into the woods, especially in this case as the young lovers encounter a group of mischievous fairies, who delight in nothing more than creating havoc among humans (if you've ever found an object in a different location than you left it, that might be fairies at work). Through a series of mix-ups, both Demetrius and Lysander are bewitched into believing they love Helena, who, like a nerdy teenager tired of being the butt of jokes, does not believe them. Hermia is confused, devastated, and then furious at this turn of events, and the mayhem continues until the fairies decide to set things right again. Another subplot follows a troupe of actors rehearsing for a play, suffering from the most horrible and hilarious actorly cliches, which allows for some delightful poking fun at oneself. Oh, and one of them is turned into an ass and is wooed by the queen of the fairies. It's a whole lot of silliness that allows for some wonderful encounters, fights, conversations, and dances among the large cast of characters.

And what a cast it is. It's so lovely to see so many familiar and beloved faces on one stage, while discovering a few new favorites who are thrown into the mix to keep things fresh. First among the many delights is the fairy King's attendant who is responsible for causing much of the mayhem. Tyler Michaels brings his unique physical consciousness to the role of Puck, creating a character that's not quite human, almost reptilian, with a bit of Gollum thrown in. Tyler seems unbound by the laws of gravity that inhibit us mere mortals, as he bounds around the stage with deep knee bends, head cocked to one side as he gleefully watches the mischief he has created, thoroughly enjoying "what fools these mortals be." He's like a mischievous loyal pet of Oberon's, who is given a long leash but sometimes needs to be pulled back when he goes too far, not for malicious reasons, but just to see what will happen. (And there's even an inside joke for those of us who saw and loved Tyler in My Fair Lady last summer.)

As the first fairy, Nike Kadri is making her Guthrie debut after making an impression on stages around town. She looks and sounds fantastic, singing a few songs and leading the fairies in their dance (although not a musical, there are a handful of original songs by Keith Thomas, with some brilliant choreography by co-director David Bolger). Christina Acosta Robinson (who returns to the Guthrie after participating in the Guthrie Experience a few years ago) is absolutely regal as both Titania and Hippolyta, fairy and human royalty, and Nicholas Carrière (a Guthrie newcomer) effortlessly transitions from the stern and slightly square Duke Theseus to the powerful and cool Oberon.

The troupe of actors is comprised of a bunch of local comic geniuses (including the always hilarious Jay Albright and Angela Timberman), with East Coast actor Andrew Weems (also seen at the Guthrie as Uncle Vanya) as the buffoonish and blustering Bottom, delivering the most ridiculously drawn-out comic death scene I've ever seen. In fact, the entire play-within-a-play is hysterical as performed by the "Community Theater of Athens." The four lovers could not be more charming (or look better in underwear) than local actors Eleonore Dendy, Casey Hoekstra, and Zach Keenan, along with Twin Cities newcomer Emily Kitchens as the eager and slightly awkward Helena.

For this production, the Guthrie has added a half dozen rows of bleacher seating around the back of the thrust stage, creating an in-the-round effect, almost like you're at the circus. If you're lucky enough to snag one of these seats (available online or call the box office for details), you're led down a stairway and into a secret hallway through the bowels* of the Guthrie, and suddenly you arrive on the stage. There are plenty of ushers and signs along the way so that you don't "accidentally" wander off into a restricted area. It's a great place from which to watch the show, although some of the effects of the video projections at the back of the stage are lost because you have to tear your eyes away from the stage (a difficult task) to look behind you at the screen. One of the reasons it's so difficult to turn away from the stage is Fabio Toblini's gorgeously rich costumes, from Hippolyta's elegant gowns, to the lovers' modern clothing, to the actors' silly get-ups, to the fairies' barely there tribal pieces.

It may be dreary bitter midwinter here in Minnesota, but it feels like warm and colorful midsummer on the Guthrie's thrust stage. The magical, mystical, mischievous dream continues through the end of March. It's not a short play (clocking in at about three hours including intermission), but it's chock full of delights for the eyes, ears, mind, and heart.


*If you want to see more of the bowels of the Guthrie, take a backstage tour, offered most weekends.