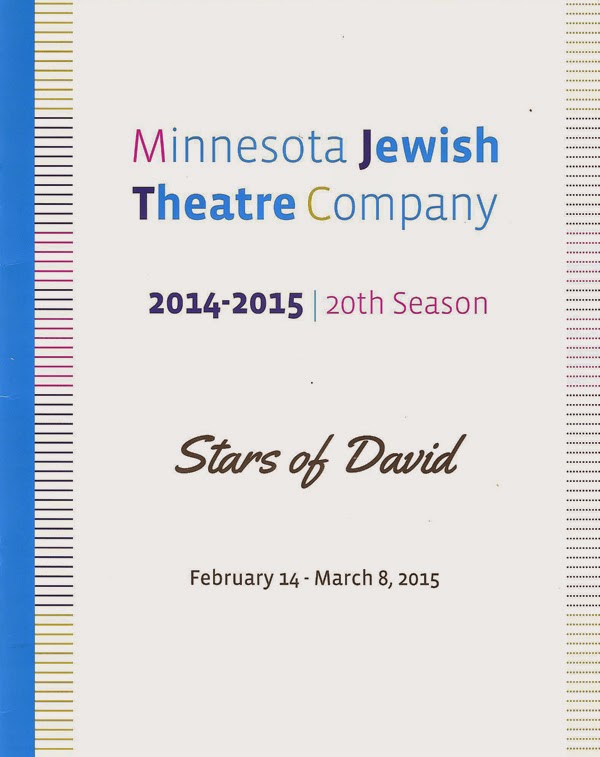 In 2007, journalist Abigail Pogrebin interviewed dozens of famous Jewish-Americans about their experiences being Jewish in this country, and compiled them into a book called Stars of David. People like Senator Al Franken, actresses Lauren Bacall and Sarah Jessica Parker, actors Jason Alexander and Dustin Hoffman, director Stephen Spielberg, and playwright Wendy Wassserstein. A book of interviews does not exactly scream "musical theater," yet it has been turned into just that, with much success, and Minnesota Jewish Theater Company has brought it to Minnesota. It's not so much a musical as it is a musical review, featuring four actors telling these personal stories in the form of a dozen or so new original songs by various successful musical theater composers. The result is an entertaining, educational, funny, and poignant 90 minutes of musical storytelling.

Director Michael Kissin has assembled a great cast and arranged the show nicely in the circular stage space designed by Michael Hoover. Names of the book's subjects are projected onto the set, along with a brief photo as each one is introduced. The onstage four-piece band directed by Kevin Dutcher sounds terrific on these varied songs. Cast members Laura B. Adams, David Carey, Bryan Porter, and Daisy Macklin Skarning, dressed in black to more easily slip into the skins of these famous people, are all very engaging with beautiful voices. Singing solo, with or without backup, or in group numbers, these four singer/actors tell stories that are funny, tragic, moving, or all three.

Highlights include:
In this country that prides itself as a "melting plot," all cultures get lost through the generations. This book and musical are a way for people of Jewish heritage to hold on to some of that culture that they grew up with and share it with others of their and future generations. But it's about more than being Jewish, it's about how to hold on to and celebrate who you are and who your ancestors were in a world that's trying to make us all the same.

Stars of David plays Saturdays and Sundays only through March 8 at the Highland Park Center Theater on Ford Parkway.