"Pippin" at the Orpheum Theatre 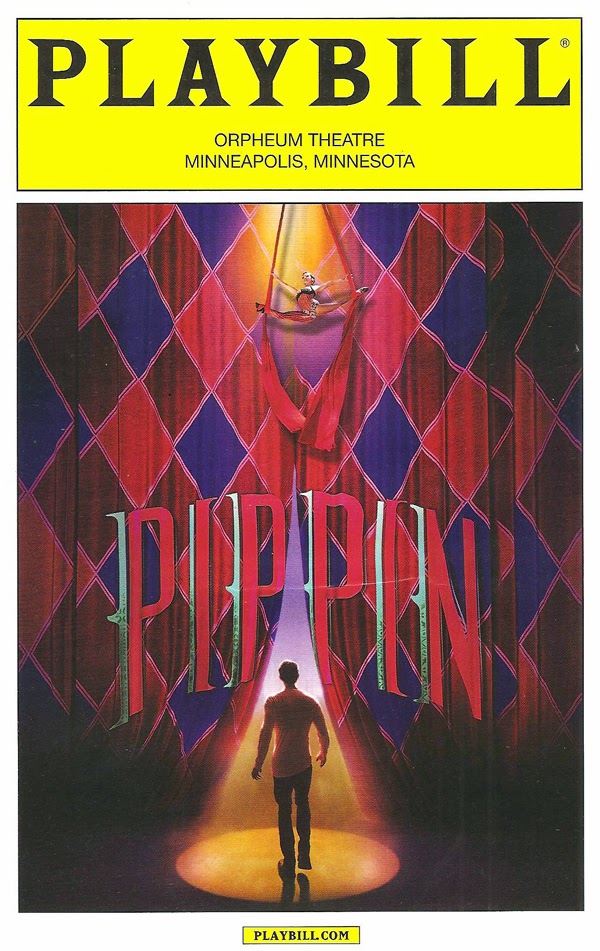 The revival of the 1972 Stephen Schwartz/Bob Fosse musical Pippin ran on Broadway for almost two years, closing just a month ago, and won four Tonys and had audiences and critics raving. I saw it last spring and fell in love with the score and the spectacular circus energy of the revival. The circus has since hit the road and I was thrilled to have the chance to see it again, as it stops in Minneapolis for one short week. There's nothing small or subtle about Pippin, it's truly spectacular in the best possible way. Many different artforms are combined - circus, Fosse-style dance, a great score, even a sing-along! And the result is a fantastically creative and entertainingly unique evening of entertainment.

Pippin is very very loosely based on the historical figures Charlemagne, a King in the Middle Ages, and his first-born son Pepin, a "hunchback" who was passed over for his father's thrown. But in this version, Pippin is a lost young man who's dissatisfied with life and searching for something to make his life meaningful. He tries war, the pleasures of the flesh, and an ordinary life, flitting from one thing to the other, but still feeling empty and unfulfilled. In the original production, the story was told through a performance troupe, but in this version it's a circus, complete with contortionists, trapeze, balancing acts, and acrobatics. It's hugely fun and light-hearted, like a musical/comedy/circus version of Game of Thrones with a touch of Monty Python's Spamalot, where dead men talk and come back to life, and battles are a beautiful dance. But the ending takes a dark turn, and we find out that this circus isn't all fun and games; Pippin was being manipulated into playing a part that was already laid out for him. He rejects this role along with the bright lights and magic of the circus life and instead turns to a simpler life defined by him. But there's always someone else waiting to fill the role, and the circus continues without Pippin. I'm not certain if this is an allegory for the allure of show business, or perhaps more generally, the roles that are laid out for us by society that we're expected to play, but that sometimes need to be rejected to find something that's more individually fulfilling.

Sorry for getting serious for a moment there, for the most part Pippin is just a whole lot of fun. The large ensemble cast is a mixture of singers, actors, dancers, gymnasts, and circus professionals, most of whom are some combination thereof. The stage looks like the inside of the Big Top, with poles and ladders that the performers constantly climb on and jump off of in thrilling feats of daring. Magic tricks, fires, trapeze, hoop-jumping, knife-throwing, amazing one-handed handstands, and so much more delight the audience. Revival choreographer Chet Walker has choreographed some brilliantly cool Fosse numbers to the fun and poppy '70s score.

The role of the Leading Player, a sort of ringmaster, is the only role that has earned a Tony for a man (Ben Vereen in the original) and a woman (Patina Miller in the revival). Those are some big shoes, or rather, knee high black boots, to step into, and Sasha Allen does so brilliantly. She owns the stage, as this character must as she directs the plot and manipulates the players to do her bidding. She also has a big gorgeous voice and looks cool doing the Fosse dances. As the title character, Sam Lips is charmingly awkward, sweetly confused, and extremely likable. A couple of Broadway vets shine in supporting roles, including the original Pippin, John Rubenstein, who 40 years later is playing the role of Pippin's father. He obviously has such a level of comfort with the show, and has so much fun with the role. Priscilla Lopez was also seen on Broadway 40 years ago, in the original cast of a little show called A Chorus Line. In what has got to be a dream role for a woman of a certain age, she gets to hang upside down on a trapeze and lead the audience in a sing-along as Pippin's grandmother, and she looks and sounds fabulous while doing so. Also great are Sabrina Harper as Pippin's step-mother, a not so typical housewife (unless you consider Cersei Lannister and Norma Bates typical housewives), and Callan Bergmann as Pippin's spoiled and favored half-brother. Last but not least, the cast features a Minnesota native in Kristine Reese, who is delightfully loopy as the woman who eventually steals Pippin's heart.

The first national tour of the Tony Award-winning Broadway revival of Pippin plays at Minneapolis' Orpheum Theatre through this weekend only, so get your tickets now if you don't want this circus to pass you by.