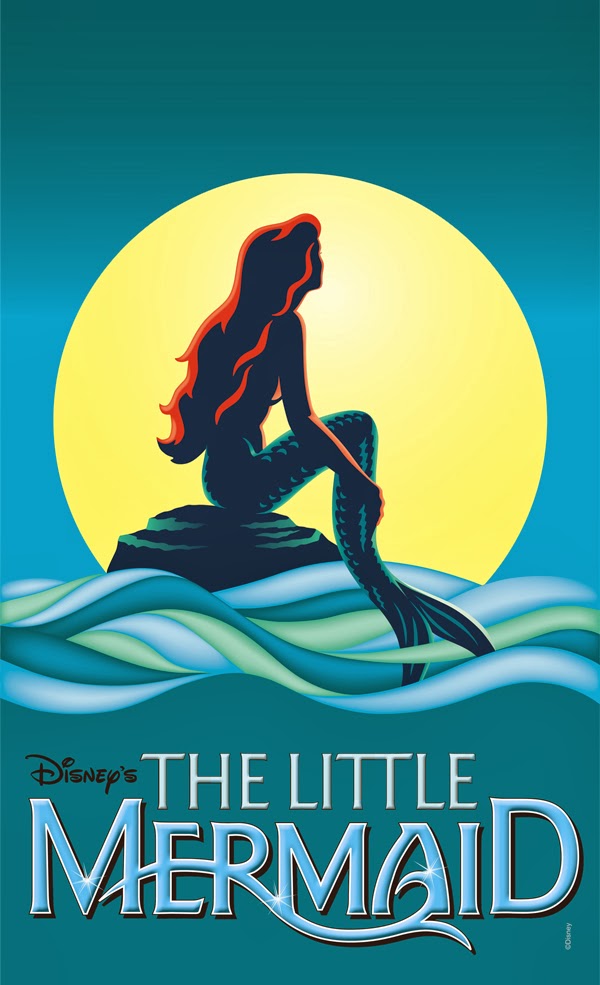 The Little Mermaid was the first of the new Disney movies, and my favorite. I was a teenager when the movie came out in 1989, and "Part of Your World" is the quintessential teenage girl anthem (before my theme song was "I Don't Do Sadness" or "I'm Not That Girl," it was "Part of Your World"). Every kid I babysat at the time had the VCR tape (yes, VCR), so I've probably seen the movie hundreds of times. The soundtrack was the first cassette tape (yes, cassette tape) I ever owned, and I listened to it constantly, and even played "Under the Sea" in band because my tuba-playing band director loved the calypso rhythm and the bass parts ("guess who's going to be on the plate"). Even though I haven't seen the movie or listened to the music in many years, it all came right back to me while watching Chanhassen's production of the stage version of the movie. Now, as you might know if you read this blog with any regularity, I'm not crazy about the trend of turning every Disney movie (and every movie, for that matter) into a musical; I think it's an easy and risk-free way for Broadway producers to recoup their investment, and not necessarily about making art. Whether or not The Little Mermaid should have been made into a stage musical can be debated (the Broadway production ran for less than two years and received mixed reviews), but since it was, there's no place I'd rather see it than at the Chanhassen with a local cast that is perfection. They bring the movie and the wonderful songs to life with the usual Chanhassen flair, fun, and color.

The stage musical The Little Mermaid is based on the Disney movie, which is based on the Hans Christian Anderson story about a mermaid who falls in love with a human Prince and exchanges her voice for a chance to be human. In the Disney version, Ariel is a precocious teenager who doesn't feel at home under the sea with her father King Triton and six sisters. She longs to be part of the human world, and collects trinkets and visits the shore against her father's wishes. After rescuing Prince Eric from a shipwreck, she makes the fateful deal with her aunt Ursula, the evil sea witch, and must charm the Prince and get him to kiss her within three days, or she's doomed to an underwater hell. Unlike the original story, in this Disney version Ariel banishes the sea witch, gets her Prince, and lives happily ever after. A typical Disney fairy tale story, but with the following wonderful features:

The Little Mermaid is playing through August at the Chanhassen, so you have plenty of time to see it, with or without kids. But I do recommend you catch it before Tyler Michaels leaves the show, probably in May sometime. It's a colorful, fun, light, happy show with great music, familiar to those of us who grew up with the movie, performed by an energetic and talented cast. Six months is a long time to do the same show night after night, but if I know the Chanhassen, they'll continue to find fun and playful moments every night to keep it fresh.