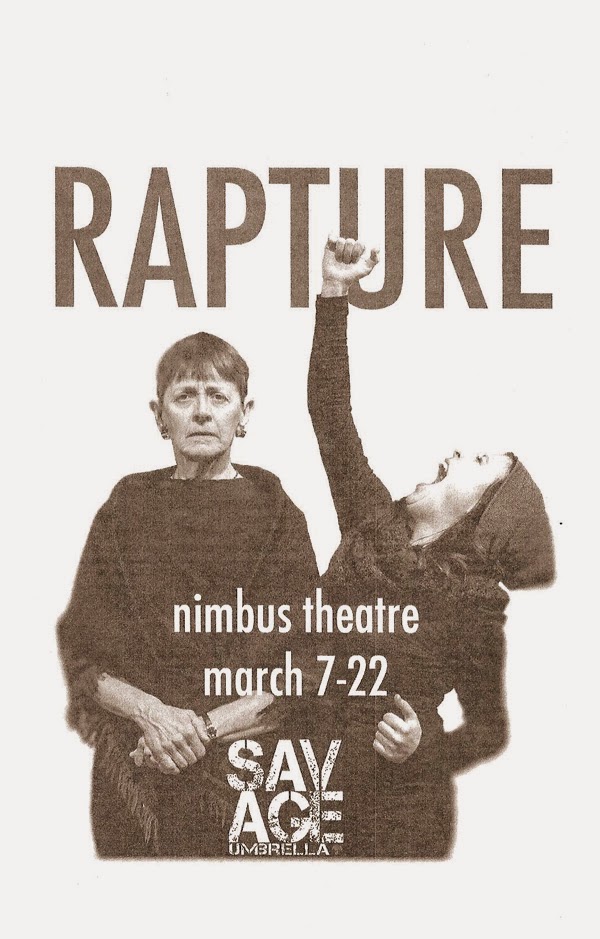 What is art? Who is an artist? Why do some works of art sell for millions of dollars while others end up at a garage sale? Such are the questions explored in the new play Rapture by Savage Umbrella, currently playing at nimbus theatre's NE Minneapolis space (which has been hosting several theater companies over the last few months). The premise of the show is that there has been an "artist rapture," in which ten percent of the world's population - the artists (actors, painters, crocheters) - has disappeared. But what about the people left behind, those that consider themselves artists but are now questioning that, and are seen by the world as frauds? It's a fascinating idea, one that's nicely explored by playwright and director Tanner Curl with a solid cast playing quirky characters. It reminds me a little of one of my favorite plays of 2012 - Red, about painter Mark Rothko (who's mentioned in the play) - in that it discusses the very nature of art, although in a more fantastical way.

Famous painter Evelyn (Mary Cutler) is one of those left behind, but her stoic and business-like nature doesn't allow any insecurities or doubts to show. Her granddaughter Lucy (winningly portrayed by Adelin Phelps) is her exact opposite, wearing her heart and her doubts on her sleeve for the world to see. An art student, Lucy's whole world has collapsed with the rapture, including the disappearance of her "best performance friend forever" Sloane (Mason Mahoney). She bonds with Evelyn's assistant Eddie (Russ Dugger), and together with the eccentric neighbor Ann (Karen Bix, a hoot), they try to break through Evelyn's icy veneer. They convince her to go on the cable TV show hosted by Terry (Laura Leffler-McCabe) to defend herself and her art. Meanwhile, Evelyn is being visited by the ghost of her old friend, a characterization of real-life artist Thomas Kinkade (Carl Schoenborn), who's also helping her to work through her issues. In the end, I'm not sure that any of the questions are answered, but it's the asking and the working through them that counts.

You can see from the cover of the program above the great contrast between the two main characters Evelyn and her granddaughter Lucy, a contrast which is nicely portrayed by Mary and Adelin. Adelin's training in physical theater (she's a founding member of Transatlantic Love Affair) shows in the way that the character of performance artist Lucy invades her entire body, nervously tapping the desk, making over-the-top movements, even in the way she moves her bare feet. The show opens with one of Lucy and Sloane's "performances," quite clever and well-done and at the same time poking gentle fun at "performance art," and ends with an expressive freedom dance as Lucy embraces her art despite what the rapture says.

The costume design (by Christina Forga) helps to create the characters, from Lucy's colorful and crazy wardrobe, to Evelyn's muted gray work clothes, to eccentric Ann's hippy skirts and sweaters, to TV host Terry's smart suits. The clean and precise set (designed by Shannon Morgan) fits Evelyn's manner - organized shelves with paints and brushes neatly aligned, her "gray" series of paintings (an homage to Rotho's reds?) hung evenly across the top. For the beach scene there's even real sand for Lucy to dig her toes into.

This was my first time attending a Savage Umbrella production, and I liked what I saw. A thought-provoking new play, solid cast, and all around well-done production. They also display art by local artists in the lobby, which adds to the evening of contemplating art. In the end, I couldn't help but think of my favorite musician Glen Hansard's Oscar acceptance speech - "Make art, make art!" (Rapture plays now through March 22.)