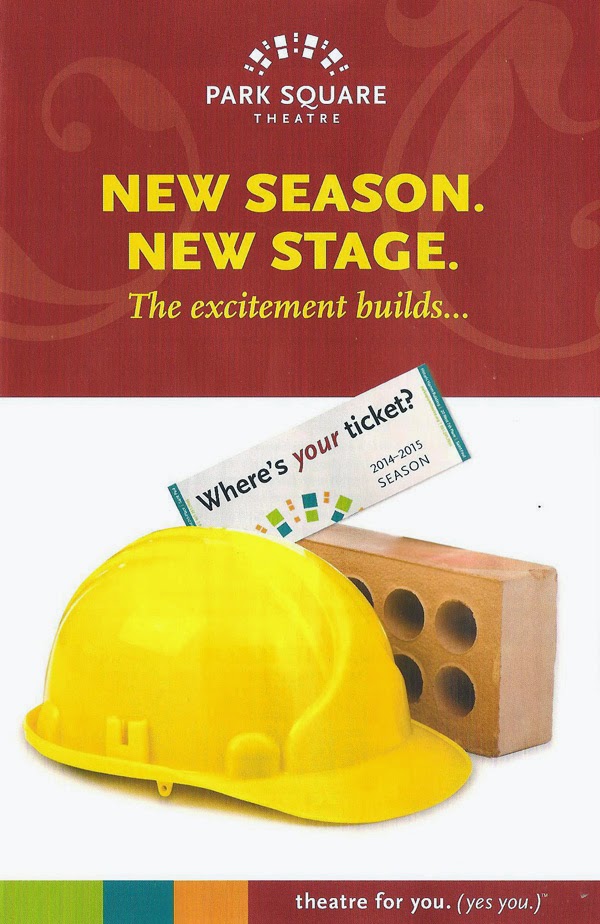 I had a great St. Paul theater day this past Sunday. In between seeing two powerful plays at the History Theatre (The Things They Carried and Lonely Soldiers: Women at War in Iraq), I stopped in at Park Square Theatre for their new season announcement. They have an exciting and ambitious new season planned, which includes opening a second stage, named for one of the theater's biggest supporters, Andy Boss, who passed away last week.

Park Square will put on 19 productions on the two stages, a crazy number of shows for one theater in one season. This new space in St. Paul is coming at a great time, since we recently lost the Ordway's McKnight Theatre on the other side of Rice Park. The new stage will house both Park Square productions and productions by other theater companies. In particular, Park Square has a three-year partnership with three nomadic theater companies - Theatre Pro Rata, Sandbox Theatre, and Girl Friday Productions.

After mingling in the lobby (or in my case, local theater celebrity spotting) with free drinks and food, the crowd moved into the theater where Artistic Director Richard Cook and Managing Director Michael-jon Pease led an informal discussion of the upcoming season, allowing the audience (mostly made up of artists and season subscribers) to ask questions. But first - a performance from the truly innovative and delightful Trick Boxing by Sossy Mechanics, a show so good I cannot wait to see it again on the Boss stage early next year.

A few other shows I'm looking forward to next season:

Most of the other shows I'm not familiar with, but I look forward to discovering. Finally, the discussion ended with another excerpt from an upcoming show, the very funny, silly, and poignant 2 Sugars, Room for Cream. In this new scene, writer/performers Carolyn Pool and Shanan Custer worked out a custody arrangement for the Ivey they won last year. This is a show I will gladly go see a third time.

And that's it. Some good stuff is happening in St. Paul. You can see the full list of shows on their website, where you will also find info about the various season ticket packages. I wish them much success with this new venture. See you in St. Paul!