"Next to Normal" at Yellow Tree Theatre 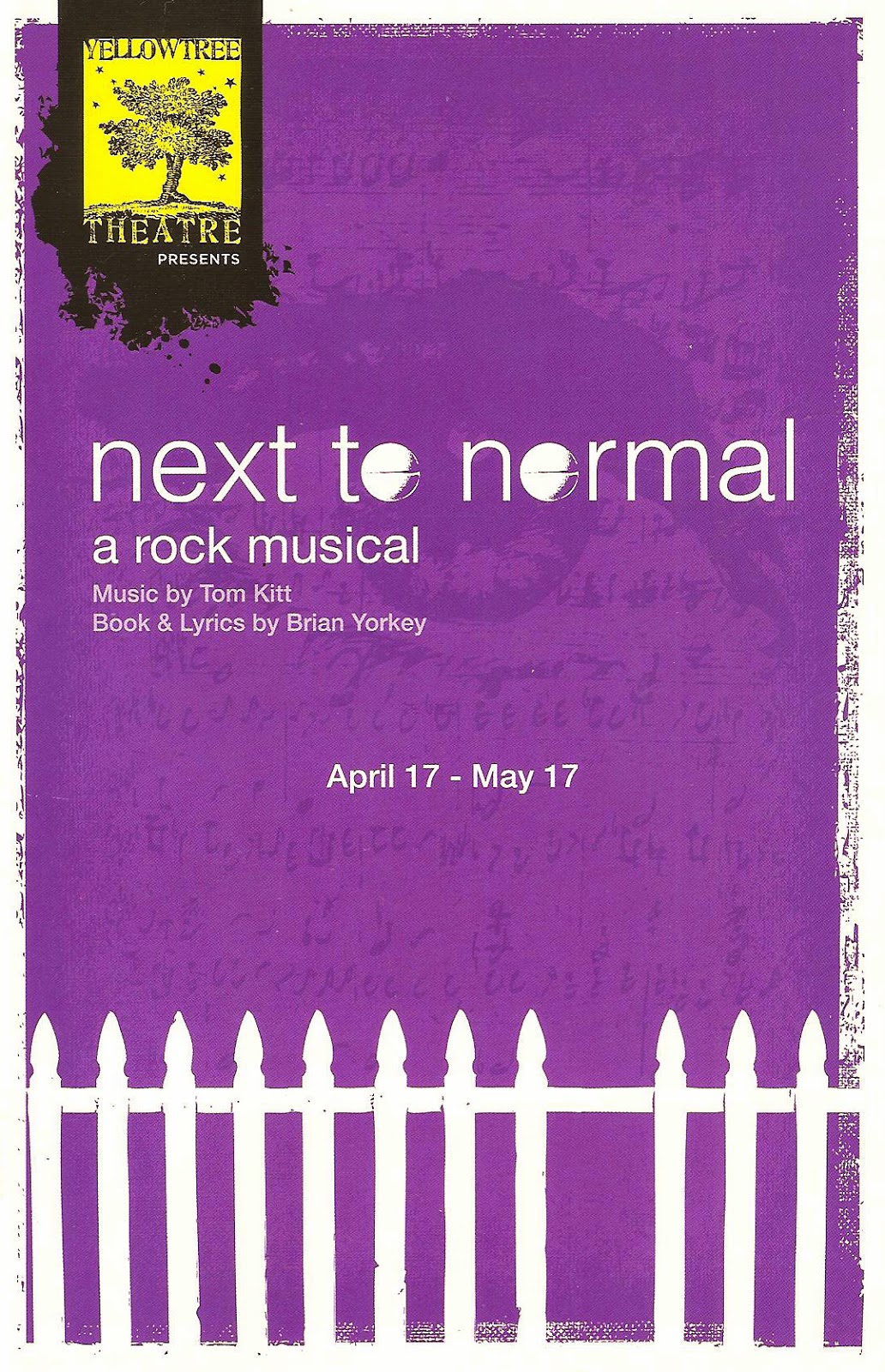 "I don't need a life that's normal, that's way too far away. But something next to normal would be OK. Yes something next to normal, that's the thing I'd like to try. Close enough to normal to get by." This sentiment is at the heart of the Pulitzer Prize winning musical Next to Normal, which tells the story of a family dealing with mental illness and grief. Despite their issues, which are many, they're bound together by love as they struggle to get through each day. It's a deeply emotional and poignant story, and a universal human one. Even if your life hasn't been affected by mental illness, at its heart the show is really about the struggle to live your life, keep your family together, and be happy even in the midst of tragedy. Perhaps that's why I love it; it's a brilliant example of how the art form of musical theater can do something profound as well as entertaining. Even though this was my 6th time seeing the show (including twice on Broadway, once on tour at the Ordway, and local productions at Mixed Blood and BCT), I've never seen it quite like this. Yellow Tree Theatre chose it as the final show of their 7th season in their cozy space in an Osseo strip mall. The intimacy of the space brings you right into the Goodman family's life in a way that's not possible in a larger theater. The fantastic and well-matched cast brings out every emotion in the Tony winning score, under the direction of Ben McGovern in his Yellow Tree debut. This is the kind of show that's an experience; you don't just watch the show, you're immersed in it and taken on a journey. It's a difficult ride at times, and may leave you feeling emotionally exhausted, but it's a beautiful and rewarding experience.

Next to Normal tells the story of what at first appears to be a "normal" American family, until the cracks begin to show. Diana and her husband Dan married young and started a family. They suffered a great tragedy that triggered Diana's bipolar disorder, which she's been dealing with for years. Everyone in the family suffers in their own way. Dan has to be the strong one as Diana falls apart, and therefore never gets the chance to deal with his own feelings about what happened. Their children, Gabe and Natalie, live in the shadow of the tragedy and are trying to deal with it on top of the normal problems that come with adolescence. Natalie's afraid that she'll follow in her mother's footsteps, and Diana's unable to be the mother that she wants to be. Diana hits rock bottom and undergoes ECT, aka shock therapy. It erases her memories, both the good and the bad, and she struggles to get her life and family back. Eventually they learn that there is no such thing as a "normal" family; all families look different and are dealing with their own unique issues, both big and small. The Goodmans struggle to find a way to get through theirs, and show us just what is possible with love.

Yellow Tree co-founder Jessica Lind Peterson returns to the stage after a couple years absence in the role of Diana. Perhaps she was saving up all her vocal and emotional strength to pour into this intense role, and it worked. Her voice sounds as lovely as always, almost too lovely for this anguished woman, as she portrays Diana's highs and lows, her confusion, despair, loss, and hope. She's well-matched by Jeremiah Gamble as Dan, who gives a strong and heartbreaking performance as the caregiver who finally lets himself fall apart. As Natalie, Libby Anderson is a young powerhouse whom I look forward to seeing more of on stage, with a voice that's strong and clear and a charismatic stage presence. Lucas Wells plays the family's enigmatic son with energy and passion as he climbs around the two-level set. Grant Sorenson brings a sweetness to the role of Natalie's boyfriend Henry that makes this a couple to root for. Andy Frye makes the most of the supporting roles of Diana's doctors, and has a bit of fun with her rock star fantasies. With a small cast musical like this you need a group of actors that work and play well together, and feel like a family. Yellow Tree has accomplished that with this cast.

The original Broadway set had three levels, and every production I've seen makes uses of multiple levels in some way. Yellow Tree has adapted this idea well to their small space, with an upper level that spans the back wall of the theater above the small thrust stage. The set is sparse and modern with minimal props or set pieces, just a judiciously used table and chairs (set by Eli Schlatter). There's not a lot of warmth in this home, which suits what the family is going through. The band (directed by Kyle Picha) is barely visible in the back of the stage behind a screen (they had to knock out a wall to make room for it!). And they sound great performing this fantastic score. Have I mentioned this is a rock musical? The driving score powers us through the story and never lets up, although it also has some lovely quiet moments. As several of my companions mentioned, music can take you places emotionally that mere words cannot, and this music beautifully brings out every varied and complicated emotion of the story.

If you haven't yet ventured out to Osseo to visit Yellow Tree Theatre, well, you're just not paying attention. They've always done great work but are really stepping up their game lately as they continue to challenge their audience and bring in top talent from around the Twin Cities. Next season is sure to be a continuation of this trend as they tackle some more intense pieces, including the Tony winning play Clybourne Park, and another one of my favorite musicals, the lovely and inspiring journey of Violet. But first, don't miss this beautifully heartbreaking production of one of the best musicals of this century. Tickets are selling fast but they have added a few performances, so get to the website or call the box office and snatch them up before they're gone!