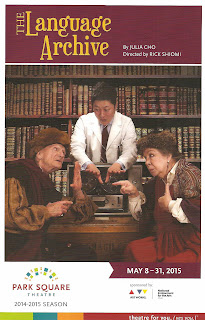 The language of Esperanto is a universal language that was invented in the late 19th Century as a way to heal the divides that speaking different languages can cause. A beautiful idea, isn't it? In a nutshell, this is what Julia Cho's lovely play The Language Archive is all about. It's about the different languages that we all speak, not just the actual language, but also the more intimate informal languages that we develop in relationships with the different people in our lives. Even though the characters in the play all speak English, they struggle to communicate with each other on a deeper level, sometimes succeeding, sometimes failing, as we all do. This play had me laughing through my tears as I contemplated life and relationships. Friends, it doesn't get much better than that.

George is a linguist who is obsessed with studying and recording endangered languages. Ironically, he is unable to communicate with his wife, Mary, who is unhappy and decides to leave him. So George goes to his work, at a place called The Language Archive, where he records rare languages before they disappear. Along with his assistant Emma (who is, of course, in love with him), his current task is to record the (fictional) language of Ellowa as spoken by a couple that he has flown in from a remote village somewhere in the world. But on this particular day, the couple is fighting and doesn't want to speak their precious language in anger. George struggles with how to accomplish this task while his world is falling apart, Emma struggles with how to tell George how she feels, and Mary struggles with finding a happier life. Watching them do so is a bittersweet joy.

Rick Shiomi, recently retired founder and Artistic Director of Mu Performing Arts, directs this wonderful seven-person cast. As the wounded linguist, Kurt Kwan gives a sensitive, heart-breaking, funny, and very real performance. Sara Ochs is sympathetic as the wife who doesn't quite understand him and wants something of her own. Emily A. Grodzik plays the eager young assistant (like a Season 1 Peggy Olson) with a simple open spirit hiding deeper feelings. Claudia Wilkens and Richard Ooms are perfection as the Ellowa speakers, extremely believable as the bickering yet loving couple (perhaps because they are married in real life). Rounding out the cast are Melanie Wehrmacher and Robert Gardner, bringing depth and interest to several smaller roles.

Joseph Stanley's remarkable set fills the stage with huge shelves upon which books, typewriters, files, tapes, and other objects associated with words are stacked. Words in many different languages adorn the walls, and the center section rotates to reveal the recording room. Shrouded stage hands quietly move set pieces on and off stage during scene transitions, which are many but fluidly handled.

The Language Archive is one of those rare plays that satisfies on so many levels. It's smartly written, funny, a bit fantastical but very grounded in reality, superbly acted, features a huge and fascinating set, and most importantly, touches the heart as well as the mind and the funny bone. I'm catching this one near the end of its run, but if you can make it to one of the four remaining performances on Park Square Theatre's main stage, it will be well worth your time and effort.