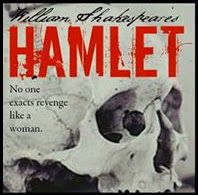 Shakespeare's not known for writing a lot of women's roles. Part of this is no doubt a practical choice - in Shakespeare's day women were not allowed to be actors so all of the roles were played by men. Theatre Unbound turns this idea on its head by casting women to play all the roles. They won an Ivey a few years ago for their all-female production of Julius Caesar, and since then I've been itching to see their work. For whatever reason, I haven't, until now. They are closing their 15th season with an all-female production of Hamlet, one of Shakespeare's most well-known plays, and perhaps one with the fewest roles for women (two). A talented ensemble of eight women play all of the roles in this epic and beloved play, bringing a new dynamic to the story while allowing the humor and tragedy of the original to take center stage.

This is an inventive ensemble-driven production of a familiar play. Director Leah Adcock-Starr efficiently moves her cast around the empty white space as they play multiple roles, sometimes in the same scene. Actors are rarely offstage; instead sitting in white chairs right in front of the audience when not participating in the action. Zoa Green provides a lovely and appropriate soundtrack to the story, making a full range of sounds with just a couple of guitars, sometimes played like a cello or a drum. Costume designer Lisa Conley has dressed the cast in soft layers of white and gray, with characters differentiated by a hat or jacket. The ghost of the dead king is represented in a beautifully creepy ghost-like way. Ensemble member Laura Mahler introduces each scene and reads stage directions in an expressive tone that matches the scene, which is an interesting choice (and a helpful one to keep all the characters straight). This, along with the actors' pre-show onstage warm-up, gives the show a more informal feel, almost as if we're watching a rehearsal (although a polished one).

No pronouns were changed to reflect the fact that the stage is populated with women, but at some point gender ceases to matter as you get caught up in the story of these complicated and damaged people. Hamlet's devastating grief and playful madness are brought to life with great energy by Kathryn Fumie. Bethany Ford Brinkley gives an emotional performance as poor mad Ophelia, and then becomes Rosencrantz (or is it Gildenstern?) with a slight wardrobe adjustment and a completely different way of being in her body. Muriel J. Bonertz is appropriately dark and devious as the fratricidal king, Gretchen Emo is the gullible queen, Kathleen Hardy offers some light moments as Ophelia's father, and Nicole Joy Frethern is her supportive and loving brother. And then some - part of the fun of this show is watching these women transform into multiple characters, most of whom happen to be men.

Theatre Unbound's Hamlet is a fresh take on one of the most well-known plays in all of theater. And not just because of the all-female cast, but also because of the small size of the cast and the playful, innovative, ensemble-driven style of the show (continuing through May 31, with discount tickets available on Goldstar)