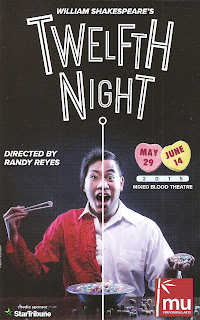 "If music be the food of love play on!" So goes one of Shakespeare's most famous lines, this from the romantic comedy Twelfth Night. Music, love, and play are three words that strongly come across in Mu Performing Arts' new production of this classic. Continuing their summer tradition of giving an Asian-American twist to traditional (i.e., typically Caucasian) works of theater, Mu has reimagined Illyria as "a self-governing indigenous Asian island, colonized by a Western power." They've also trimmed it to 99 minutes (of which I heartily approve, having recently declared Shakespeare should always be 90 minutes) and infused it with much playful humor and charming musicality. The result is an absolutely delightful romp through one of Shakespeare's most popular comedies.

If you, like me, have a tendency to get all your Shakespearean romantic comedies confused, here's a brief reminder. Twelfth Night is the one with the shipwrecked male and female twins who are separated, each thinking the other is drowned. Viola decides to disguise herself as a man, as one does in such situations, calling herself Cesario and going into service for the Duke Orsino. On his behalf she woos the mourning Olivia, who wants nothing to do with the Duke but falls for young Cesario, who in turn is in love with the Duke. Viola's twin Sebastian shows up later causing much amusing Shakespearean confusion. Meanwhile, Olivia's kinsman, Sir Toby the buffoon, and her handmaid Maria play a cruel trick on another member of her household, Malvolio, using his love for Olivia to humiliate him. It's all tied together with music, "the food of love," and in the end everyone lives happily ever after as true identities are revealed.

Director Randy Reyes has encouraged playfulness in his cast, setting a great example through his role as Feste the clown (a great role for a director, as he spends much of his off stage time sitting among the audience observing). Randy's Feste is charming, hilarious, and smarter than everyone else, as fools often are. He also plays the ukulele and sings some lovely original music composed and music directed by Jason Hansen, joined by the four-person chorus, who sing and play some percussion instruments (a small taste of Mu's fantastic taiko). The large ensemble cast is great, some playing multiple parts. Highlights include Eric Sharp as Malvolio, playing all the layers of his pride, foolishness, and humiliation; Eric "Pogi" Sumangil and Alex Galick, providing much of the comedy as the real fools in the show, Sir Toby and Sir Andrew; Francesca McKenzie, with Shakespeare's words flowing naturally out of her mouth as the mourning and crazy in love Olivia; the appealing Stephanie Bertumen as Viola/Cesario; and Emma Valentine, stealing scenes as the lisping hook-handed pirate.

The look of the show, set on an Asian island, is spot-on. Great use is made of the space at Mixed Blood, with audience on both sides of the stage, which is constructed of natural looking wood in several levels giving plenty of space to play (although it is a bit like watching a tennis match at times). Stacey Palmer's Asian-inspired costumes are gorgeous, from Olivia's cool and pretty white and gold ensemble, to Malvolio's sharp military jacket, to the chorus member's colorful gowns.

Mu's take on Twelfth Night is musical, playful, and fun. It doesn't delve too deeply into the issues in the play (gender, identity, love, e.g., both the Duke and Sebastian are played by women, but I'm not really sure what that's supposed to signify, if anything), but it's a summer comedy and is as light and refreshing as one should be. And providing a place for Asian-American actors to play all sorts of roles is not insignificant in a world where the practice of "yellow face" still exists. Twelfth Night continues at Mixed Blood Theatre through June 14 (discount tickets available on Goldstar)