"War with the Newts" by Sandbox Theatre at Park Square Theatre 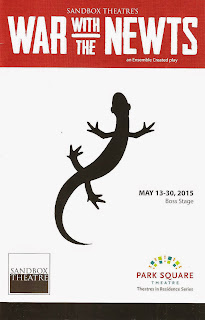 When I was a kid, my sister and I would occasionally find a salamander in our backyard sandbox. They freaked me out, so gross and slimy and unexpected (we also sometimes found petrified cat poo, but that was decidedly less disturbing). To this day the thought of salamanders makes my skin crawl. But fortunately, the salamanders in Sandbox Theatre's War with the Newts are much less unpleasant, although the story they tell is still quite disturbing, albeit for different reasons. Based on the 1936 Czech novel of the same name, War with the Newts is a remount of Sandbox's successful 2007 production, and the first of Park Square Theatre's partnership with three smaller local theater companies* in their new theater in the basement of the Historic Hamm Building. It tells of a post-apocalyptic world in which a large and intelligent breed of newts (a kind of salamander) is discovered and abused by people (as sadly we're wont to do to "lesser creatures"), and then revolts to take over the world. Which as you can imagine has all kinds of allegories to the modern world. This fascinating story is brought to life in an incredibly inventive and unique way, with the ensemble beautifully personifying these strangely alien yet familiar creatures. 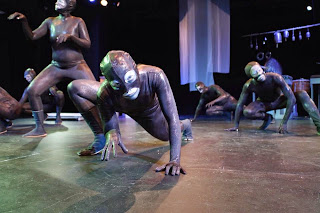 Before the show even starts, seven actors in newt costumes are creeping around the stage in a newt-like way, making what I assume are newt-like noises with their mouths, bodies, and little silver balls on their thumbs. At first it's difficult to tell the actors apart in their identical black catsuits with the gold tarnish, but soon you can detect slight differences in the face paint and body movement so that each newt takes on a somewhat distinct personality. Often speaking in unison, they begin to tell the story of the War, so that this history is not lost. The newts strive to be better than the humans that they defeated, declaring "newts should not kill newt!"

The newts don costumes as they tell the story, which begins with a sea captain who discovers them and puts them to work harvesting pearls from the deep. The humans teach the newts to work, keep them as pets, study them in zoos, eat them, all of the things that humans like to do to animals (or people who are seen as "other"). But in this case, the newts fight back after they're taught to be soldiers. And who can blame them? Human greed can only go so far before nature revolts. 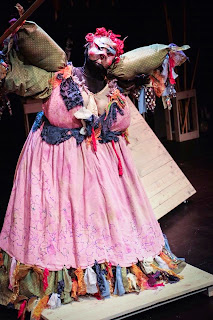 The entire cast (which includes Derek Lee Miller, Evelyn Digirolamo, Gregory Parks, Heather Stone, Kristina Fjellman, Megan Campbell Lagas, and Wade A. Vaughn) is incredibly committed to the concept, remaining newts even through curtain call. It's pretty remarkable the way they crawl, crouch, swim, and creep around the stage, all while telling this very relevant and modern story. As they don a wig or mask to portray a human character, their spine straightens and somehow they're human again. They're aided in this transformation by costume designers Kathy Kohl and Mandi Johnson, who have created not just the newts' looks but also simple and clever accessories that help create the human characters (and one not so simple huge flouncy dress). The bleached wood set pieces simply set the scene and are used creatively throughout the show (designed by Derek Lee Miller). The cast takes turns creating music and sound effects on various percussive elements in a corner of the stage, which enriches the tone of the show. Video and sound distortion are also employed to create specific effects.

I'm so glad Sandbox Theatre (a company I only "discovered" last summer at the Fringe) is revisiting War with the Newts as they celebrate their 10th anniversary. It's a fascinating and unique creation, and really pushes the boundaries of what theater can do and be. And kudos to Park Square for providing a space for this kind of inventive theater to be seen, perhaps in front of audiences that wouldn't normally see it. Playing now through May 30, check it out for something a little different. Trust me, these are the kind of salamanders that you want to discover in your Sandbox.


*The other two productions in Park Square's partnership this summer are Theatre Pro Rata's The Illusion and Girl Friday Production's The Matchmaker. You can buy individual tickets to each show, or save money on a three-show package.