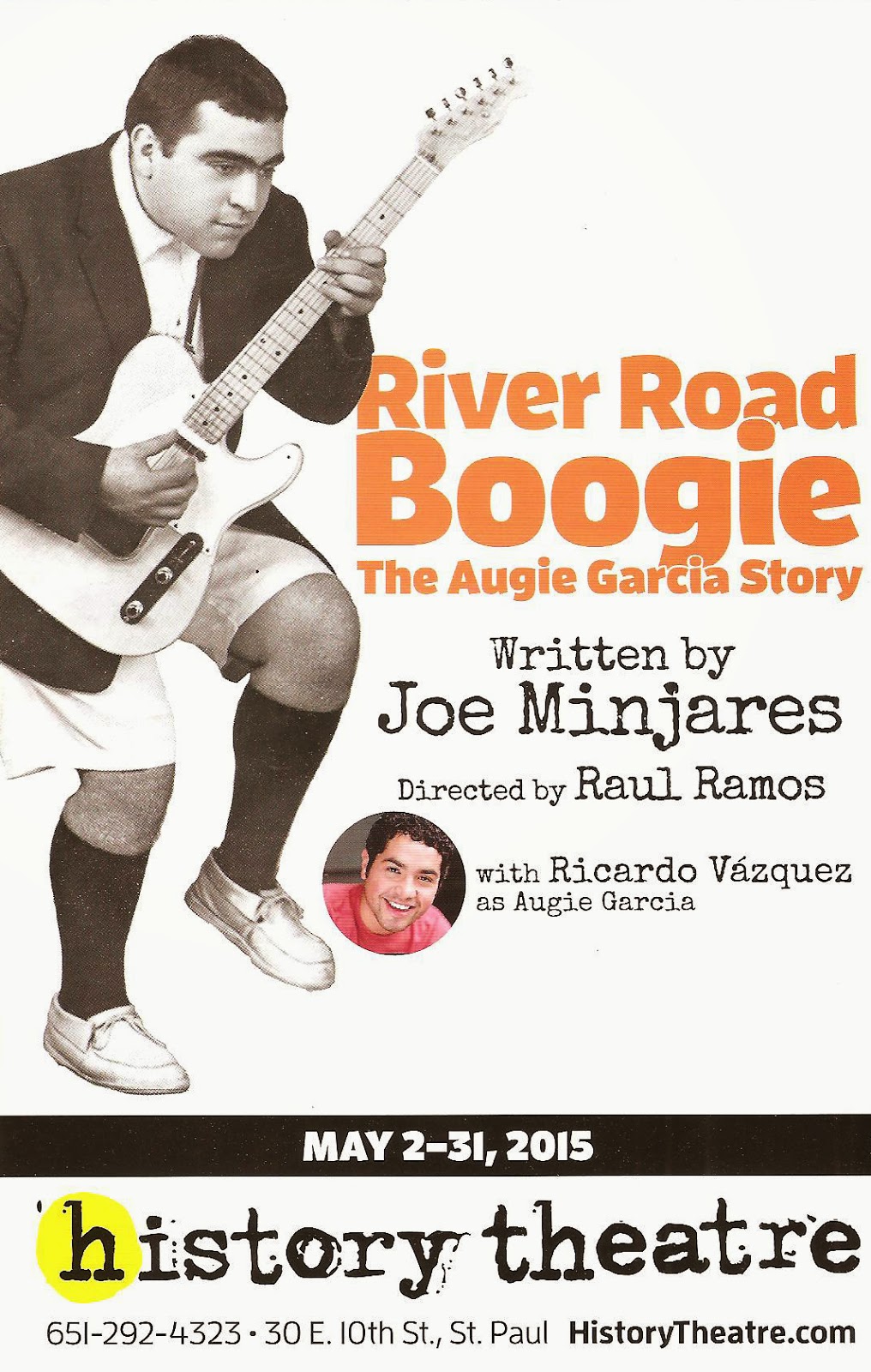 Does the name Augie Garcia ring a bell? Unless you were a young person who frequented the local Rock and Roll clubs in 1950s St. Paul, probably not. Augie is considered the Godfather of Minnesota Rock and Roll, but unlike his contemporary Buddy Holly, he was a one-hit wonder who never achieved national fame, whether by choice or happenstance is unclear. A new play at the History Theatre, written by local actor and playwright Joe Minjares, sheds light on the fascinating story of this man who was not just a pioneering Minnesota musician, but also a Korean War vet and a devoted family man. Like The Buddy Holly Story (a History Theatre hit remounted last fall), River Road Boogie tells the story of Augie's life through his music as performed by this fabulous cast, but unlike The Buddy Holly Story the music takes a back seat in the second act as Augie's life starts to turn away from a music-focused one into a family-focused one. As always at the History Theatre,* this play is a wonderful opportunity to learn about a great Minnesotan you might never have heard of, but whom you will certainly admire and appreciate after seeing him brought to life on stage.

Augie Garcia grew up in a tight-knit Mexican-American family in St. Paul's West Side neighborhood, specifically an area know as The Flats across the river from downtown St. Paul. He and his friends were such loyal St. Paulites that they refused to drink Grain Belt beer (brewed "across the river"), only Schmidt or Hamm's would do! Our story picks up when Augie returns from a few harrowing years serving in the Korean War. He's happy to be home with his family, friends, and music, and channels his conflicting feelings about the war into his music. He starts a band called the Augie Garcia quintet (inexplicably with six members) and they become quite successful in the local music scene, with a standing gig at the River Road Club in Mendota. In what was perhaps the highlight of their career, Augie and the boys opened for Elvis and were famously kicked off the stage by Colonel Parker because they were coming dangerously close to upstaging the King. Soon after, fame came a-callin' with the promise of bigger gigs and national attention, forcing Augie (in this interpretation of his life) to do some serious soul-searching and decide what he truly wanted in life. Jersey Boys showed us what happens when you succumb to the dangers of fame and success, but Augie chose a different path. As a result most people today don't know his name, but those who saw him perform remember, and thanks to the History Theatre, so will I.

Augie released a handful of singles in the mid-50s, the most successful of which is "Hi Yo Silver," inspired by the popular Lone Ranger TV series. The show incorporates five Augie Garcia originals, including this hit and the title song, as well as a few other hits of the time and traditional Mexican songs. All are performed in the context of a concert, rehearsal, or just singing around the house or bunker with friends, making this more of a play with music than a traditional musical. This along with the fact that the cast doubles as the band (a mix of actors and musicians) means that the music feels organic to the story, rather than an add-on. The big Rock and Roll numbers all come in the first act and are fabulously performed by cast, band, and dancers. The second act only features a few quieter songs, the musical spectacles of the first act fading into memory as did Augie's musical career. The tone of the piece shifts as Augie grows up and deals with his demons.

The Ivey Awards 2013 Emerging Artist Ricardo Vázquez is the perfect choice to play Augie Garcia. He embodies the man physically, emotionally, and musically. Augie's music inhabits his body in a specific way, particularly in the song "Ivy League Baby," when he's all over the stage energetically performing crazy dance moves in Augie's trademark shorts (in the post-show talk back Ricardo said he was able to watch a video of a performance Augie gave in the '90s, and extrapolated that back a few decades with his own unique spirit). In addition to the music, Ricardo also brings depth to the character, particularly in Augie's emotional breakdown after a local tragedy reminds him of the hell of war. The excellent supporting cast includes Matt Rein with a couple of diverse performances as Augie's tormented war buddy and band mate (playing the upright bass), and a sleazy radio DJ; Lara Trujillo and Pedro R. Bayón as Augie's supportive parents; Kelly Matthews as Augie's girlfriend Nancy in a sweet love story; and Shawn Hamilton as the sax player who serves as a sort of narrator of the story. Like they did for Buddy Holly, History Theatre has brought in some students from St. Paul Conservatory for Performing Arts to serves as dancers and concert attendees, bringing a youthful energy to the stage.

Tom Mays' cool scenic design provides a perfect backdrop for the story. A replica of the Robert Street Bridge, so important in Augie's life and memories, dominates the back of the stage, with the outline of a huge guitar behind it (something I didn't actually notice until I attended the "hiatus concert" by my favorite local band Storyhill on the same stage later that day). The stage on which Augie and the boys perform rolls out for the concert/rehearsal scenes, and then rolls back again to allow room for scenes in Augie's house, a bar, or other locations.

I truly appreciate the History Theatre for bringing to life people who are important in the history of my beloved home state of Minnesota, but who may not be written about in the history books. Augie Garcia is one such Minnesotan, and it's a treat to watch him shine on stage in the person of the uber-talented Ricardo Vázquez, supported by all these great actors, musicians, and dancers. River Road Boogie continues through May 31 (discount tickets available on Goldstar).


*The History Theatre recently announced their new season, and I'm super excited that the season opens with my favorite Raw Stages reading Glensheen, a musical about the famous Duluth mansion and the strange murder mystery that occurred there. My favorite Minnesota playwright Jeffrey Hatcher sets just the right tone, with some really great songs by Chan Polling. Another very promising reading from this year, Complicated Fun, closes out the season next spring. And if you missed Buddy Holly last time around - don't worry, he's back this fall.