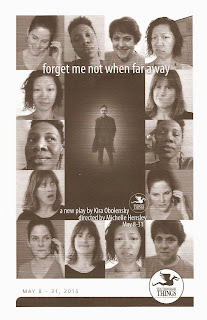 The village of Farmingtown has been devoid of men for so long that when one returns from the far away and long-lasting war, the first woman he meets rushes up to him and inhales him deeply. This hilarious and oddly touching moment at the beginning of Kira Obolensky's new play Forget Me Not When Far Away sets the tone for this playful and poignant fairy tale about a soldier returning to a home he once knew. Ten Thousand Things has been on the road with the show for a few weeks, performing at correctional facilities, community centers, and other unlikely venues. As director Michelle Hensley said in her introduction of the show (which has come to be one of my favorite parts of a TTT production), the fact that this play has resonated with such diverse audiences in different ways is a credit to the skills of the playwright, who has created a world outside of time and space that somehow feels familiar and relatable to everyone. This world is brought to life in the beautifully sparse way that only Ten Thousand Things can do, with a brilliant cast of six performing in a fully lit room in a space so small that they literally trip over the audience. The fanciful story is grounded in truth and made to feel very real by the universality of the story, the charming accessibility of the language, the up-close-and-personal performances by the actors in whom you can feel every nuance of every emotion through a look in the eyes, the twinge of a facial muscle, or a subtle movement of the body. Ten Thousand Things harnesses the magic of theater in its most basic form like no other company can.*

Farmingtown is a quaint village in which news is passed by the town crier, the main employment is farming and working in the morgue, and the men all go off to war while the women stay home. The women have adjusted well to this man-free life, taking charge of all systems and businesses in town. They're in for a shock when one John Ploughman returns from war, discharged due to an injury. The more than 20 women depicted in the play (portrayed by just five actors) all react to him in a different way, from the aforementioned inhaling, to surprise, to skepticism, to a determination to win him. Lacking the necessary paperwork to prove that he's not dead as was announced, John faces a tough road readjusting to life in Farmingtown. He's searching for a woman he knew before the war, a woman he now loves but scorned in the past, when he was a bit of a playboy. It turns out Flora Crisp has been pining after him all these long years, or at least the idea of him. But this isn't your typical love story; the people of Farmingtown find love and fulfillment in different ways, as the war ends and a new chapter of their lives begins.

Ten Thousand Things often casts their show without much regard to gender, changing the gender of characters or casting women as men or vice versa. But in this play it's quite specific that there is only one man in town, surrounded by women (and one awkward and adorkable little boy). Ron Menzel is that man, his masculinity standing out in a soldier's uniform against the women in their cute but functional dresses and colorful Keds (costumes by Sonya Berlovitz). Ron is one of my long-time faves from the Guthrie (beginning with the memorable Intimate Apparel nearly ten years ago), and it's a thrill to see him in this setting as he fully inhabits this character in every moment of his journey, effortlessly portraying the frustration, hope, desperation, brokenness, determination, and above all humanity in this man in all his flaws and glory.

I can't say enough about these five women who play over 20 characters, differentiated not only by the wigs on their heads but also by a unique voice and carriage of the body. All of them give sometimes hilarious, sometimes touching, always specific performances, including:
Ten Thousand Things travels light in terms of props and set pieces, which only seems to make them more creative. Irve Dell's clever and efficient set consists of four standing metal frames that hinge down to represent a door, window, or bar, with two metal boxes serving as all the other necessary furniture. Peter Vitale creates a delightful soundtrack for the story, subtly setting the tone. For some reason there's clog dancing, which provides a reason to show off Jim Lichtsheidl's charming choreography.

Forget Me Not When Far Away is a delightful story about returning home, reconnecting, and re-establishing your identity in a changed world. Like other TTT productions, the show feels like the neighborhood kids have gotten together to put on a play in someone's backyard, if your neighborhood were populated with some of the most talented theater artists in town. Paid public performances continue at the Minnesota Opera Center and Open Book through the end of May. Go see it, and then make plans for next season when TTT continues their pattern of Shakespeare-musical-new play with Henry IV Part I, Dear World, and Changelings by Kira Obolensky.

*To find out more about the magic of TTT, check out founder and Artistic Director Michelle Hensley' book All the Lights On.