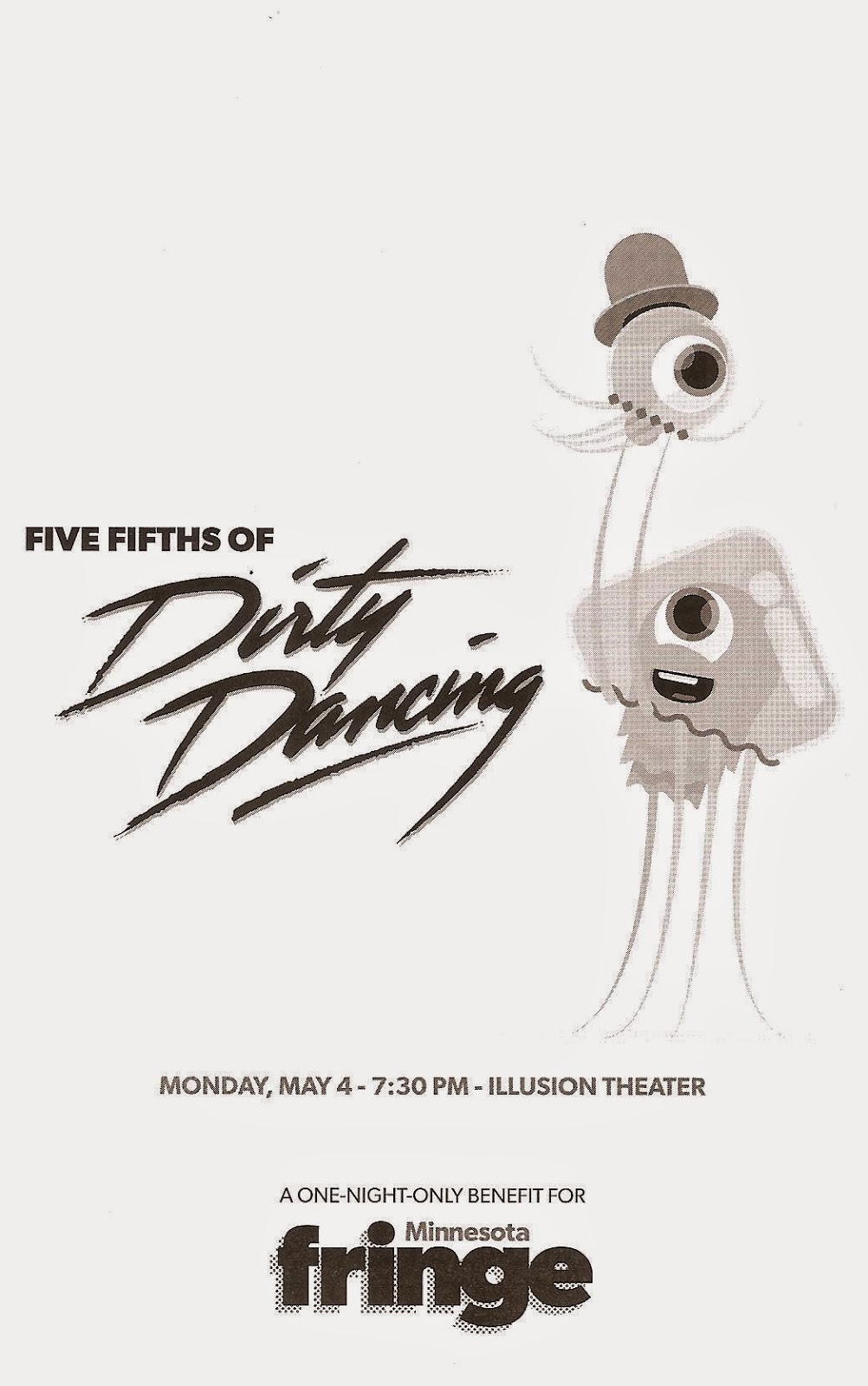 The 2015 Minnesota Fringe Festival kicked off this week with their annual spring fundraiser entitled "Five-Fifths," in which a popular movie is divided into five parts and given to five Fringe companies for their interpretation. This year they chose Dirty Dancing, presumably because it's one of the best movies ever made (that's not sarcasm; a devotion to Dirty Dancing and Patrick Swayze is inherent in anyone who was a teenage girl in the '80s). I could not resist this beloved movie receiving the Fringe treatment by this group of creative and wacky geniuses, and was not disappointed by the result, which was as delightfully bizarre and diverse as the festival itself.

The Huge Founders opened the show, with Mike Fotis (a Fringe legend) in drag as Baby, doing the requisite narration as well as hilarious commentary into a microphone. The five-person cast took us through the introduction to Kellerman's.

Picking up at the famous "I carried a watermelon scene," in which Baby is first exposed to the dancing, was the dance troupe Guittar Productions. They did some pretty cool physical theater things in their part of the retelling.

The baton was then passed to the adorably awkward Carl and Wanda Finkles. Like in their Fringe show last year, the Finkles did their part in a "we're putting on a show!" kind of way. Except that the show they prepared for was that other '80s dance movie Footloose. So they winged it in their own hilarious and original way as we saw the training sequence and the big dance number (a reprise from their last show).

In Mainly Me Productions' segment of the show, it was raining Patrick Swayze (if only!). The "Hey Mickey/Hey Sylvia" crawling on the floor scene was crashed by Patrick Swayze from four of his other movies and the SNL Chippendales sketch, which then turned into a Chippendales dance-off, culminating in the To Wong Fu Patrick Swayze singing "It's Raining Men." The whole thing was hilarious!

Who better to take us into the final big dance number than Bollywood Dance Scene? The Kellerman's talent show was a Bollywood dance-off (on For the Loyal's small sloped hexagonal stage), Johnny declared "nobody puts baby in a corner," and they did the lift!! Then the 30+ dancers came out into the audience for a joyous dance worthy of the spirit of Dirty Dancing.

The 2015 Minnesota Fringe Festival runs from July 30 through August 9. Check out their website for a list of companies (tentatively) scheduled to perform and for further information about the fest.