"The Half Life" by Live Action Set at the Southern Theater 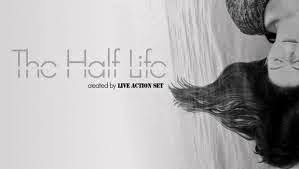 Have you heard of the new ARTshare program at the Southern Theater? For just $18 per month, you can see as many shows as you want (and are able to) by their almost 20 resident companies. It's like all-you-can-eat for theater! It's a great deal and a great way to experience much diverse art while providing consistent support to the Southern and their artists. One of their resident companies is Live Action Set, which just closed the deliciously creepy immersive experience Crime and Punishment. Going into this show, I had no idea what to expect, except that Live Action Set always provides an experience that's a bit weird and a bit wonderful. The Half Life is most certainly a bit weird (about an hour of mostly silent movement), and very wonderful.

In the post show discussion that follows every performance, creator/directors Noah Bremer and Joanna Harmon talked about the head vs. the heart, the push and pull of life, thinking vs. feeling. You may or may not get that from the performance; you may see and feel something entirely different. That's the beauty of this piece, and of art in general. 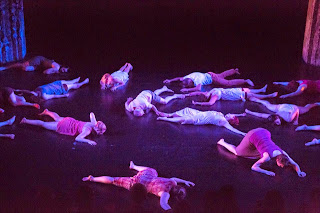 The show begins with a single performer slowly descending the stairs and walking across the empty stage of the gorgeous Southern Theater to place clothes on a pile at the back of the stage, and then take a place on the floor in an interesting position. Then another performer does the same, then another, then another, until the floor of the theater is filled with bodies (I'm an audience member who typically likes to sit close, but in this case being a bit further up might be an advantage). This sea of bodies begins to move, slowly and subtly at first, then more and more forcefully until the theater is alive with a cacophony of movement. It almost made me dizzy to watch it, each individual moving differently but somehow combining to form a whole, some kind of being. 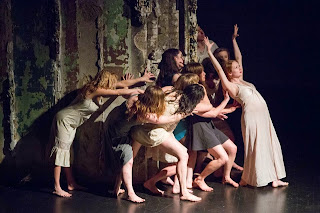 The show continues for about an hour, with different groups of people performing different movements in different formations, at times being pulled back to the wall, at times struggling forward. Sometimes a movement is in one body part only, sometimes the whole body is consumed in herky-jerky movement, all accompanied by haunting original music by Linnea Mohn. It's quite fascinating to watch the many different ways the same idea resides in different bodies.

It's sometimes hard for me to turn off my brain, especially knowing I need to put words on paper the screen to somehow describe this. But that's the best way to experience this piece; try not to think about what it means or what they're trying to say, but just let go and see what it makes you feel. It's a truly beautiful and moving experience, one of those shows that's so engrossing that when it's over and the lights come up, it's a bit jarring facing harsh reality again.

Three more performances remain of The Half Life, and check out what else is on the ARTshare schedule.