"One Arm" by New Epic Theater at the Lab Theater 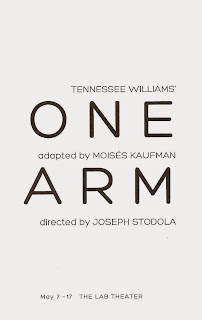 Thanks to playwright Moisés Kaufman (see also The Laramie Project), an unproduced screenplay written by one of my favorite playwrights, Tennessee Williams, was saved from oblivion and can now be seen on the stage. Williams published One Arm as a short story in 1942 and attempted a screenplay in 1967 that never went anywhere. Kaufman recently adapted it into a one-act play, and thanks to the new theater company New Epic Theater, Twin Cities theater-goers can now see this beautifully tragic piece of Tennessee Williams writing in a gorgeous production at the Lab Theater. A remount of one of my favorite Fringe shows last year, One Arm tells the story of a boxer who lost his arm, his identity, and his self-respect in an accident, and spent the rest of his short life trying to get it back. There are three levels of greatness going on in this show: Tennessee Williams' poignant and moving story, Moisés Kaufman's clever adaptation, and New Epic's inventive and thoughtful interpretation. All of it comes together for a completely engaging and engrossing 90 minutes of theater.

The man with the titular one arm is Ollie Olsen, a boxer who loses his arm in an accident that kills two of his friends. No longer able to box, he stumbles into hustling (a quaint and old-fashioned word for prostitution) as a way to survive. He finds that he's good at it, and travels around the country making an impression on many men, and a few women. But he's become dead inside, unable to feel anything for anyone, until he ends up in prison and is faced with the end of his life and the memories of past encounters. The story is told within the framework of a screenplay; a narrator begins the story carrying a script in his hands, and he and other characters read stage directions such as "exterior night," or "camera pans." It's almost as if you're watching a movie, or a movie acted out on stage, which adds another level of interest and originality to the storytelling.

The tight six-person ensemble (only two of whom return from last year's production), fluidly and seamlessly tell the story that jumps around in time and place. Taking over the role of Ollie is Torsten Johnson in an incredibly physical performance, saying as much with the way he writhes on the floor or climbs over the furniture as he does with his sparse words. It's an apt interpretation of a character who's defined by his physicality - his prowess in the boxing ring, his "mutilation," his job as a hustler.

Most of the story is told through a series of perfect two-person scenes with Ollie and the people he meets, all of whom are portrayed by the five other cast members. H. Adam Harris is the narrator, bringing to life Williams' (and/or Kaufman's) elegantly descriptive words, and also plays a man who is perhaps Ollie's only true friend. The other four actors sit in chairs behind the stage with their various props and wardrobe pieces around them, watching the scene until they're called to join in the action. The two returning cast members are the radiant Aeysha Kinnunen playing all of the Tennessee Williamsesque women, and Adam Qualls in several diverse performances including the callous prison guard and a nervous divinity student who wants to help but isn't quite sure why or how. Craig Johnson makes an impression (as always) as a wealthy and lonely john, a sleazy porn producer, and the crazy landlady. Rounding out the cast is James Kunz, who also choreographed the movement. There is no "choreography" as you typically think of it, but the way the actors move around the space is really quite beautiful and expressive.

Director and scenographer Joseph Stodola makes great use of the space at the Lab Theater, an even more appropriate setting that the Southern Theater was last year at the Fringe. The raised square stage has seating on three sides, giving the feeling of watching a boxing match, especially when two characters are in the box sparring verbally or physically. Some of the action also takes place outside of this box, near the chairs at the back of the stage, with the narrator wandering in and out through the audience. The stage is empty except for a metal frame bed, one chair, and a cart with an old projector on it, hinting at the screenplay nature of the original work. It all speaks to a thoughtful attention to detail that elevates the work.

It's worth noting that when I attended the show last Saturday night, I was one of the oldest people in the audience. This is a rare occurrence; at 41 I'm often one of the youngest people in the audience (nothing makes me feel younger than a Sunday matinee at BCT!). Perhaps it was the 9 pm start time - we older people have a hard time leaving the house after 8, and if I wasn't already out at a birthday party I probably wouldn't have made it either. Whatever the reason, kudos to New Epic Theater for drawing in a younger audience. But they deserve to be drawing in a larger audience than the one I was part of. I know they're a new company in a community rife with theater companies young and old, but trust me when I say that this one is worth your time. The director, cast, and creative team have created a gorgeous piece of theater based on the work of two fine playwrights. I hope that they're not a one-hit wonder and will continue to produce thoughtful, relevant, inventive, gorgeous work like One Arm. Performances continue tonight through this weekend only, so you have six more chances to see it (a few 9 pm performances but also some 7:30 shows for those with an earlier bedtime).