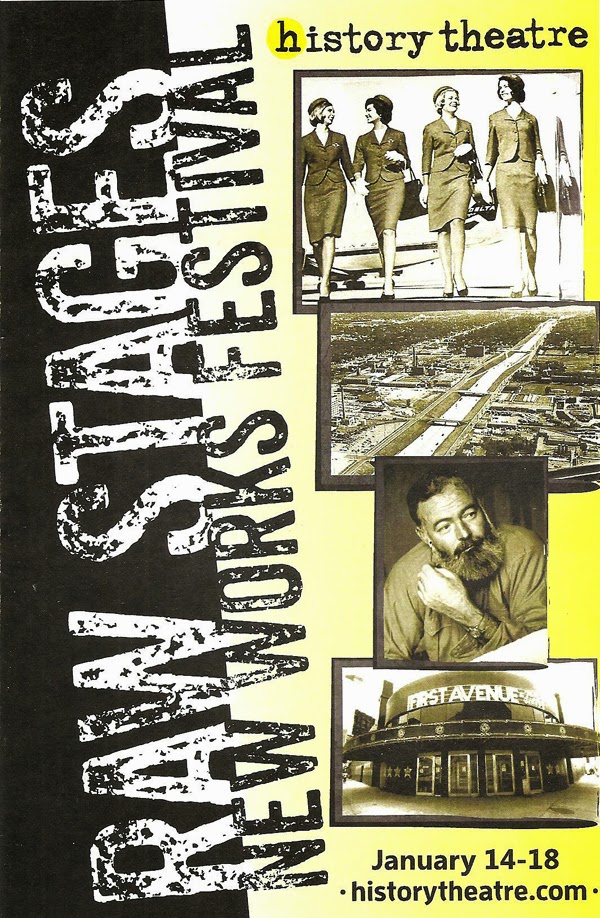 I love history. I love my beloved home state of Minnesota. I love new works of theater. So of course there's nowhere else I'd rather be this week than in lovely downtown St. Paul for The History Theatre's "Raw Stages" new works festival! One of the unique and wonderful things about The History Theatre is that most of the work they do is new original commissioned plays and musicals. "Raw Stages" is an important part in their development process (two of the works in last year's festival have full productions this season - last fall's Radio Man and this spring's The Debutante's Ball). From the audience perspective, it gives you a sneak peek at what may be coming up in future seasons and gives you the opportunity to give feedback about what you'd like to see. I was lucky enough to attend all four readings, and all are wonderfully interesting and entertaining looks at important facets of Minnesota history. The History Theatre gathered a stellar group of actors and directors to breath life into these readings, making it easy to see the potential they all have to be great plays.

Stewardess by Kira Obolensky (cast: Tracey Maloney, Charlotte Calvert, Anna Sundberg, Mo Perry, and John Middleton)
I feel like I should have heard the name Mary Pat Laffey before, but I have not. Thanks to Kira Obolensky's new play, I now know that Mary Pat was a pioneer on the forefront of equal rights for women in the workplace. She was hired by Northwest Airlines as a stewardess in the late '50s, a time when it was perfectly acceptable to hire and fire women based on their weight, height, age, marital status, and hairstyle. It's so outrageous now it seems almost quaint, but it was an extremely unjust system that also did not pay or promote women as much as their male counterparts. Mary Pat joined the union and fought for changes, some of which were accomplished. But when working through the union no longer worked, she filed a lawsuit against the company that took 15 years to resolve and eventually ended in Northwest paying millions of dollars to Mary Pat and the other women who joined her in the lawsuit.

The play mostly takes place in various hotel rooms as the stewardesses talk about their life and work. In addition to Mary Pat, we follow a few of her friends, including naive farm girl Primmie, and wealthy Fran who aspires to be a pilot. The characters are well-defined and all have their arc as the story moves from 1958, through the '60s, and into the early '70s. It's similar to The Heidi Chronicles in that it follows a woman through the equal rights movement; it's one specific story that represents a larger, more universal story. The play is a bit talky, and I like talky plays, but it verges on pedantic at times. A full staging and a few scenes in other locations with other characters could add some of that dramatic punch. And is it wrong that I really want to see those uniforms, especially as they change over time?

Highwaymen by Josh Wilder (cast: Pearce Bunting, Stephen Yoakam, Allen Hamilton, and James A. Williams)
What's so interesting about the building of a highway?, you might ask. When that highway is the long anticipated and needed link between Minneapolis and St. Paul, and its construction destroys an important and close-knit African American community, it's more than interesting, its a brilliant example of the race and class issues that have long plagued this country. Just because we're well north of the Mason-Dixon line doesn't mean that Minnesota doesn't have ugliness in its history too. Josh Wilder has written a dramatic and compelling play that focuses on the (white) decision makers in the building of I-94 through the Rondo neighborhood in the late '50s.

Most of this play takes place in a city hall meeting room, with a few scenes in a Rondo barbershop. The four main characters are soon-to-be Deputy Commissioner of Highways Frank Marzitelli, St. Paul chief civil engineer George Shepard, retiring St. Paul city planner George Herrold, and Rondo resident, activist, and barber Timothy J. Howard (all historical figures, the latter combined a bit with Reverend Floyd Massey for dramatic purposes). The three city officials are attempting to finish the budget for the proposed highway when they're interrupted by a protest outside. Herrold invites one of the men in to plead his case. The three men have different reactions to his proposals, and reasons for wanting what they want. Herrold goes to Howard's barbershop to discuss things and is not welcomed with open arms. Each of the four men gets a monologue in which their character motivations are more fully explored. It's all much more compelling and dramatic than I'm making it sound. In addition to the race and class issues, the play makes some pretty profound statements about the price of progress (and who usually has to pay that price) and the way that technology advances at a rate faster than our ability to process and deal with it. Trust me, you'll be seeing more of this one.

Ernest & The Bull by Kevin Kautzman (cast: Bob Davis, Charity Jones, Charles Hubbell, Paul Rutledge, Aeysha Kinnunen)
I had no idea that the great American author Ernest Hemingway had any connection to Minnesota. But as we learn in this new play by Kevin Kautzman, he spent several months of the last year of his life at the Mayo Clinic in Rochester, receiving ECT for depression and paranoia. Sadly, the treatments did not work and he committed suicide shortly after being released. This play weaves together dreams, fantasies, and hallucinations to create a picture of a talented but sick man.

This one was quite interesting and a bit confusing. I'm very curious how this would be staged; it would require much stage "magic" to accomplish the stage directions of people appearing and disappearing, or turning into bulls or beards, or scenes changing as if in a dream. The main characters are Ernest and his last wife Mary, at their home in Cuba and later Idaho. Ernest's colleague Hotch visits him to help with his book, but he also appears as a sort of narrator/hallucination, as does another aspiring writer from thirty years earlier. The tone is playful as the characters occasionally acknowledge they're in a play ("I hate the theater," mutters Hem). Unfortunately I couldn't stay for the post-show feedback session; I would have loved to have heard a bit more about the work and other people's thoughts. It's surreal and complex and fascinating.

Complicated Fun: The Minneapolis Music Scene by Alan Berks (cast: Brandon Brooks, Stephanie Bertumen, Nathan Cheesman, Dustin Bronson, Clarence Wethern, Erik Hoover, Anna Hickey, H. Adam Harris, Darrick Mosley; band: Nic Delcambre and Blake Foster)
Apparently there was some important and ground-breaking music happening in Minneapolis in the early '80s. Bands like The Replacements, The Suburbs, Hüsker Dü, Soul Asylum, and The Jayhawks all got their start during this period. While I've heard of most of these bands, I'm not familiar with their music (I'm not nearly cool enough to be aware of that scene). Not to worry, this new play with music tells the story in a fun and entertaining way, regardless of any prior knowledge of the music. It's a story of a music community, a bar, a record store, musicians, and music lovers all coming together to create a new sound.

Playwright Alan Berks has done a great job constructing the play around the music. This is not your typical jukebox musical in which a story is made up and forced to fit within a group of songs. Rather it's a play with music, that tells the real story around the creation of the music and the community, with the music occurring organically - in a bar, party, or record store. In a world populated with real-life figures, two fictional characters, known simply as boy and girl, lead us through the story. They meet as kids, just wanting to listen to music. Each of their lives are changed in different ways by each other and the music. It's a sweet relationship, and these characters give the audience a way into this world. We also witness the evolution of First Avenue, from a club that helped to discover new bands, to a tourist destination for Prince fans, and beyond. The story moves from the club, to parties, to the next door record store where music nerds passionately debate the intricacies of their favorite records. Even though I'm not a fan of this music, and probably won't become one, I found this piece to be well-written, compelling, and great fun, especially in the hands of this fantastic cast. I look forward to seeing a fully staged production with a full band and the music more fully integrated into the story.