"The Prime of Miss Jean Brodie" at Theatre in the Round 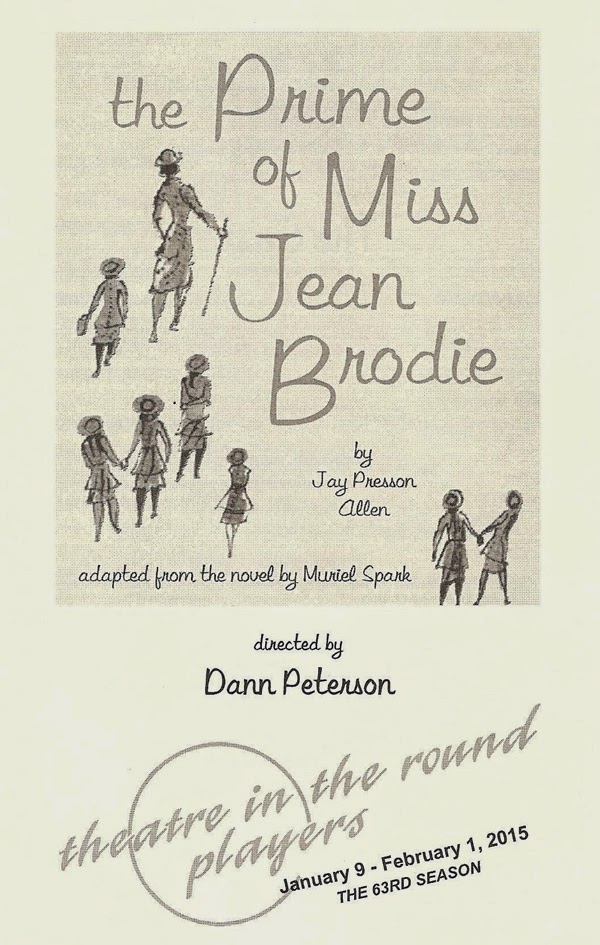 Muriel Spark's 1961 novel The Prime of Miss Jean Brodie has been ranked among the best English-language novels of the 20th century. In the late '60s it was turned into a play and movie (the latter starring Dame Maggie Smith as the title character, for which she won an Oscar). Theatre in the Round is presenting the play as part of their 63rd season (they're the oldest theater in Minneapolis, by the way). It's a fascinating look at a complicated woman, but in the end, I wasn't quite sure what to think about her.

Miss Jean Brodie is a teacher at a private girls' school in Scotland in the '30s (an accent that the large cast accomplishes with varying degrees of success). But not just any teacher, she's a special teacher with her own ideas of what should be taught and how it should be taught. She focuses less on the prescribed curriculum and more on imbuing "her" girls with a sense of confidence and independence. She takes them on outings to museums, theaters, and the countryside, and favors telling romanticized stories from her past over teaching them history from books. But it's not all as rosy as it sounds. She also uses her students as pawns in her romantic entanglements with two fellow teachers, one a married man. As the girls progress through school, they remain under Miss Brodie's influence, for better or worse. She has left her mark on all of them, and some of them will pay the price.

I had a had time with the character of Miss Brodie; I wasn't sure if I was supposed to like her or not. In the end I decided I didn't like her. She talks a lot about educating her girls and forming them into the best they can be, but mostly what I saw was a woman reliving her youth through these vulnerable girls, regaling them with thrilling stories of her past, convincing them to do things like fight for a cause that maybe wasn't theirs, or "pose" for an artist, knowing full well what that would lead to. Several of the girls were bullying another girl, a fact she either was ignorant to or didn't care about. She gained their trust, brought them along on fun outings, treated them as confidantes, but wasn't there for them when they truly needed her. It seemed like a lot of talk that covered a lack of any real feeling for these young women.

The young actors playing these young women influenced by Miss Brodie range in age from 14 to 23, and all are wonderfully real and in the moment. McKinnley Aitchison is a standout as Sandy, the one Miss Brodie singles out as her chief confidante, and believably portrays her transformation from teacher's pet to disillusioned young woman. As Jean Brodie, Anna Olson effectively conveys the complexities of the character. Maybe headmistress Miss MacKay was supposed to be the bad guy, but in the form of Mary Kay Fortier Spalding, I found her to be sympathetic and reasonable.

It's always fascinating to see how Theater in the Round deals with the "problem" of a 360 degree stage, and as per usual, it leads to some creative and well thought-out staging, in this case by director Dann Peterson on a set designed by John A. Woskoff. The teacher's desk and students' benches take up half of the stage, with the art studio a tiny but well-used raised space on the side, while other scenes take place in the open area.

The Prime of Miss Jean Brodie continues weekends through February 1.