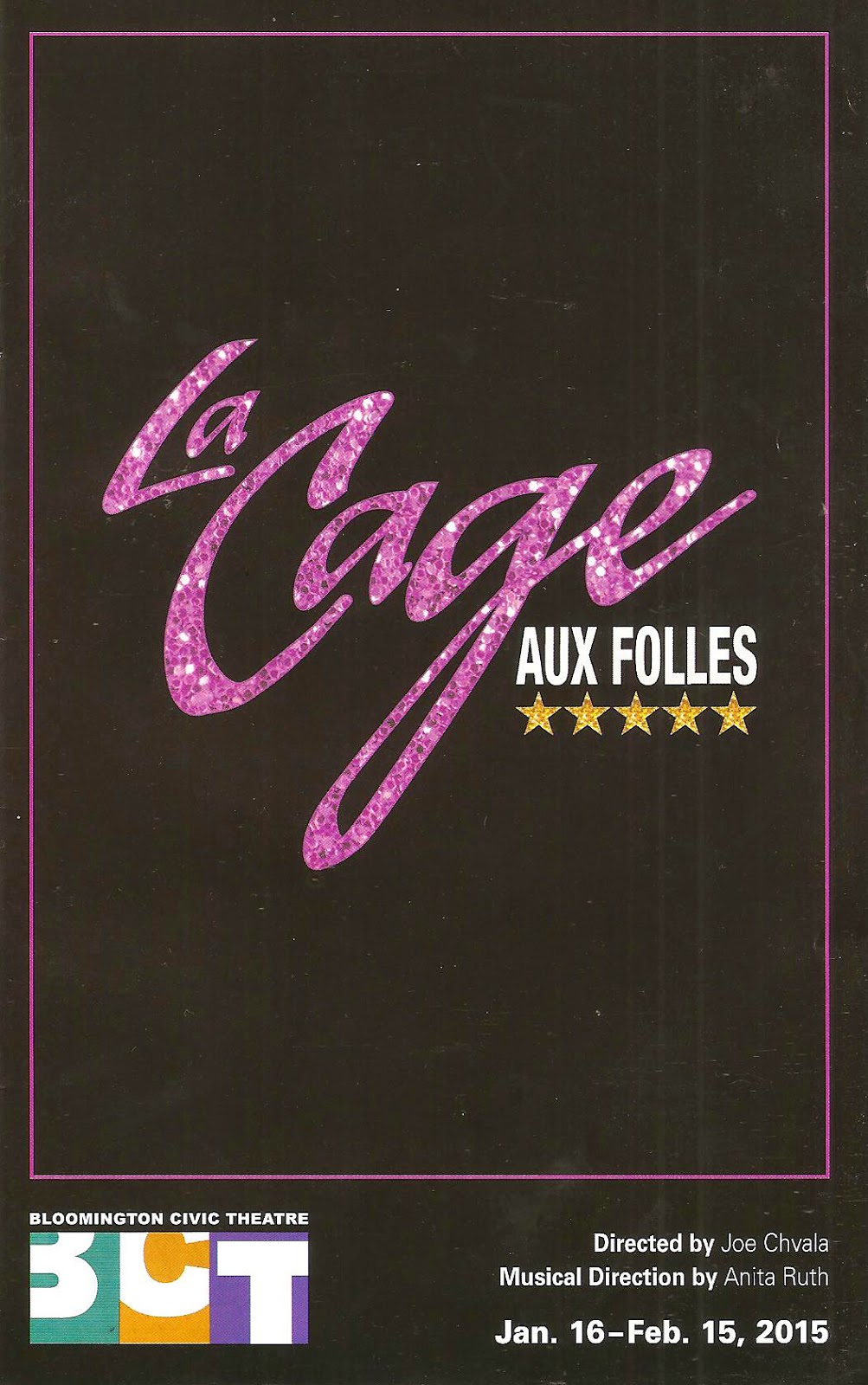 La Cage aux Folles is such a heart-warming show. Despite all the glitz and glamour of the drag nightclub in which it is set, at its core it's a simple story about love, family, and having the courage to be who you are. Bloomington Civic Theatre plays up both sides of this show, with big production numbers featuring men (and a few women) in drag with glitzy costumes and sets, but a really sweet heart beating underneath it. As my companion stated, it's "sheer joy."

If you've seen the 1996 movie The Birdcage starring Nathan Lane and Robin Williams you're familiar with the story, which began as a 1973 French play called La Cage aux Folles, and then became a 1983 Broadway musical written by Harvey Fierstein (book) and Jerry Herman (music and lyrics). La Cage tells the story of gay couple Georges and Albin. Georges runs the nightclub where Albin is the star, performing as his alter ego ZaZa. Georges' son Jean-Michel, whom Albin has helped raise, comes home to announce that he's engaged to Anne, the daughter of a conservative politician who wants to shut down all drag entertainment. The in-laws are coming to town, and Jean-Michel asks Albin to leave for the evening, instead inviting his birth mother to pretend that they're a "normal" family. Albin is understandably hurt that the man he considers his son is ashamed to introduce him to his fiance. He can't stay away, and poses first as "Uncle Al," and then, in drag, as Jean-Michel's mother. Of course the deception doesn't last, but they're able to convince Anne's father to give his consent with some good old-fashioned blackmail. Jean-Michel realizes what a mistake he made and tells Albin he thinks of him as his mother. And they live happily ever after, for "the best of times is now."

At the heart of this piece is the relationship between Albin and Georges, and BCT has found two perfect actors to portray them. Acclaimed costume designer Rich Hamson has come out of the costume shop and onto the stage in a glorious and heartfelt performance. Perhaps it's appropriate for a costume designer to play a role involving so many varied and fabulous costumes, but his performance is about so much more than just the costumes. It's a beautifully real and tender-hearted portrayal of a parent, lover, and performer who just wants to be who he is ("I Am What I Am") and love his family. As Georges, Jim Pounds has never looked or sounded more suave, and the two men have wonderful chemistry and portray such a beautiful and real relationship of an old married couple who still love each other despite, or because of, their eccentricities. Everyone in the supporting cast is great, especially Michael Terrell Brown who is delightfully over-the-top as Albin's butler, er... maid.

Joe Chvala directs this fabulous ensemble cast and choreographed the Cagelles' fantastic dance numbers. And the Cagelles are all stunning. In the exaggerated make-up common to drag performance (which they each apply themselves), it's difficult to tell the experienced drag performers from the men who are donning heels and a wig for the first time or the women who are thrown in just to keep the audience guessing. Benjamin Olsen's sets are big, bold, and colorful. Ed Gleeman has designed the over-the-top nightclub costumes, as well as some fabulous '70s street wear that includes bell-bottoms, super wide lapels, hippie dresses, and one stunning orange/green/gold jumpsuit that I covet.

With the recent passage of marriage equality in Minnesota, and increasingly, across the country, it's timely to see a show that's about two men who have created a long-lasting, loving, stable family. A family that may be a bit more flamboyant than most, but one that's a model of love, support, commitment, and acceptance. La Cage aux Folles is a lot of fun, it's really sweet, and it has a great message - a message of acceptance of all kinds of family, and of being proud to be who you are. Playing now through February 15, BCT shows have a tendency to sell out, so get your tickets now (a few discount tickets remain on Goldstar).


*This sentiment can also be stated as "No day but today," from Jonathan Larson's beautiful creation RENT, which was on my mind because I happened to see this show on the 19th anniversary of his death.