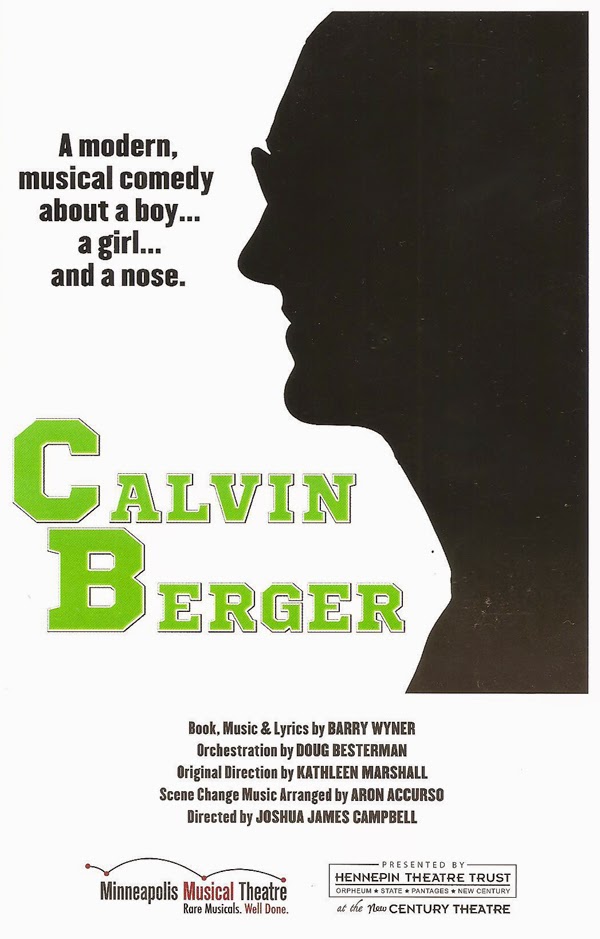 "Rare musicals. Well done." Minneapolis Musical Theatre lives up to their motto, having given us great productions of such lesser known musicals as Steven King's Carrie and the controversial Bloody Bloody Andrew Jackson. Their second show this season is the 2006 musical Calvin Berger, loosely based on the classic French play Cyrano de Bergerac, set in a modern day high school. Instead of a sword-fighting poet with a big nose, this Cyrano is an insecure high school student named Calvin who thinks he has a big nose. Whether real or perceived, it keeps him from living the life he wants. It's a clever adaptation of a classic story, relating the still relevant themes of being true to yourself and wanting to be loved for who you are in a modern and accessible way. And while the non-Cyrano parts of the story are a bit cliche and the characters familiar stereotypes, it's charmingly delivered by a strong cast of four and makes for a fun and entertaining evening at the theater.

Calvin Berger is your typical high school nerd, smart and funny in his way but lacking in self-confidence, in this case because he thinks nose is too big. Isn't that always the way, we see our flaws first and think that everyone else sees them too, when really they're too busy with their own lives to notice. In fact we learn in the opening number that all of these characters, even the ones who appear to have everything, are insecure about something. Calvin's best friend is a girl named Bret, who secretly pines for him (a plot point that's familiar to children of the '80s). But Calvin only has eyes for the pretty popular Rosanna, who worries that she may never be anything more. When Rosanna asks Calvin to help her get to know the cute new guy Matt, he reluctantly agrees. Matt's insecurity is his inability to talk to girls, so like Cyrano does for Christian, Calvin gives Matt the words he lacks to help him woo Rosanna. The story diverges from the original (spoiler alert: nobody dies), and the truth is eventually revealed. Everyone learns that it's better to be who you are than pretend to be someone else, and is happier for it.

The small cast allows for a greater focus on these four characters without the distraction of an ensemble. Director Joshua James Campbell brings out the best in the talented young cast; all four are extremely likeable and bring depth and color to roles that are familiar high school stereotypes. Gregory Adam is adorkable as the awkward Calvin, and has the most poignant moments of the show as he shows us Calvin's deep longing to be accepted. Logan Greene is perfect as the sweet but dumb Matt, and the two have a believable bromance that makes you think they kind of like and need each other, despite their odd arrangement. As Rosanna, Emily Madigan shows that she's more than just a great dancer, bringing a sweetness of voice and character to the role. Last but not least, Kecia Rehkamp is the quintessential funny best friend who wants to be more than just a sidekick. And happily, the two girls become friends in the end and overcome that tired cliche of fighting over a boy. All four actors have great voices singing these funny and clever, if not particularly memorable, songs, with some lovely harmonies in duet, trio, and quartet, accompanied by a four-piece band just barely visible behind the back wall of the set.

I was happy to see that they built out the usually wide and shallow stage, which can feel crowded and two-dimensional, to form a mini-thrust. It gives the characters more space to move around and even interact with the audience a bit as they hand out fliers for the big bachelor auction fundraiser. The set looks like a typical high school, with lockers and the high school colors painted on the floor (set by Darren Hensel). There's nothing noteworthy about the costumes, which is a good thing because these kids look like typical teenagers, each with a style specific to the character (costumes by Lori Maxwell, who doubles as the Music Director).

Calvin Berger is a really cute show, and I don't mean that in a condescending way; cute can be good and pleasant and everything you want sometimes. It's a sweet, charming, funny show, with a great young cast that is fun to watch. Playing at the New Century Theatre through February 15 (discount tickets available on Goldstar).