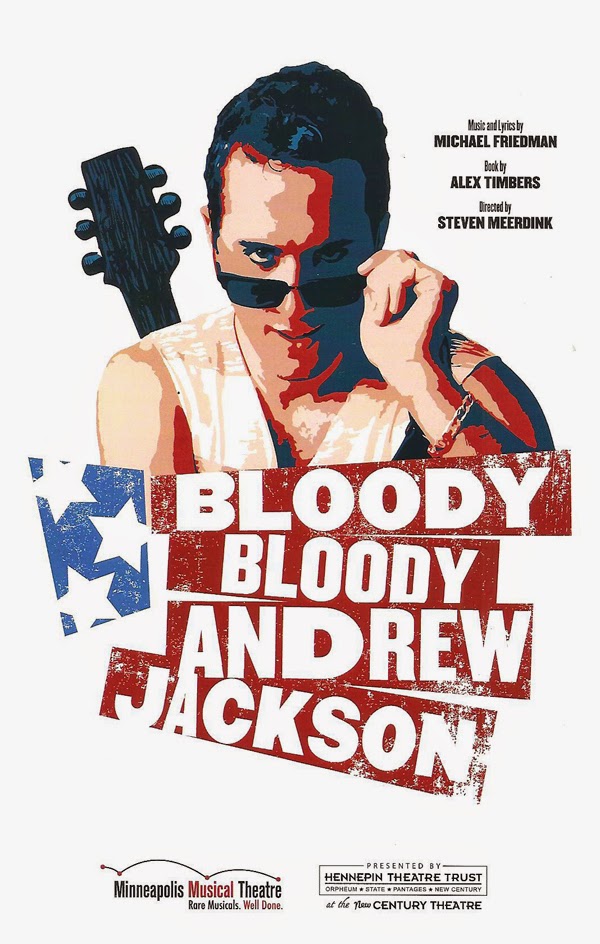 If you have a toe in the local theater world, you've probably heard about the controversy surrounding Minneapolis Musical Theatre's production of the 2010 Broadway musical Bloody Bloody Andrew Jackson. I saw the show on Broadway and found it to be sharp political satire and social commentary wrapped up in a great emo-rock score. Just a few days before this local version opened, founder of New Native Theatre Rhiana Yazzie posted an open letter on Minnesota Playlist criticizing the piece as offensive in its depiction of Native Americans, and expressing disappointment in MMT for making the choice to produce it in Minnesota (read the full letter here). She organized a protest to be held at the New Century Theatre on opening night. While the letter and protest did not deter me from seeing this show I had long been looking forward to (and included on my summer must-see list), it did give me something extra to think about while seeing the show for a second time. It's important to remember that this is not just a light and fun romp through history, but rather a pretty serious commentary on a very ugly period in American history.

Bloody Bloody Andrew Jackson tells the story of the seventh president of the United States of America, from his humble beginnings on the frontier of Tennessee, to “hero” of wars against the Spanish, English, and Indians, to the White House. Andrew Jackson has dreams of overthrowing the Washington “elite” (sound familiar?) and becoming “the people’s president,” but he soon discovers that a president has to make the hard decisions, and is never going to please everyone. One of the things Jackson is most known for is “Indian removal,” having convinced many Native American tribes to sign treaties under false pretenses and move west, resulting in the infamous Trail of Tears (the song "Ten Little Indians" recounts the number of ways that Native Americans died at the hands of the white man). As the narrator of the piece says, historians are still debating whether Jackson was a hero or a genocidal murderer. The musical deals with this serious subject matter in a satirical, campy, and over-the-top way. Young Andrew is portrayed as a petulant teenager, and the politicians as idiots. It's a ridiculous and fantastical mash-up of history that's intended to entertain and make a statement about our past and present.

The large and energetic young cast breathes great life into this crazy story. As our (ironically) sexypants president, Philip C. Matthews is charismatic with a great rock voice. Aly Westberg as his wife Rachel is extremely sympathetic and gives a gorgeous rendition of the poignant song "The Great Compromise," about the difficulties of political life for the family left behind. Not only is Amanda Weis hilarious as the doomed storyteller, but she also steps into the band to play keyboard on a number of songs. Besides Amanda, the band consists of just a couple of guitars and percussion, led by Darren Hensel who occasionally takes part in the action and dialogue of the show. The ensemble members all bring great specificity and humor to the many roles of various presidents and politicians.

The show looks and feels like a rock concert, with bright lights, microphone stands, and modern rock costumes with an Old West twist. Unfortunately there were some sound issues on opening night, with headset mics going in and out or sounding muffled or staticky. Hopefully they'll work these issues out, but I would prefer that they lose the headset mics altogether and just use the hand-held mics for the more loud, rocky songs. I believe Philip's mic went out halfway through the show and I'm not sure it ever came back on, but you could still hear him and he sounded fantastic. The advantage of a small space like New Century is that you don't necessary need to mic everyone all the time.

Bloody Bloody Andrew Jackson is a musical that deals with issues of corrupt politics, elections, compromises made by politicians and their families, racism, slavery, and the near extermination of an entire race of people. Maybe the creators bit off more than they could chew in a mere 90 minutes and therefore were not able to give each issue the weight it deserved, but it's an ambitious attempt to bring light to these issues in an accessible rock musical kind of way. It's not a bad thing for art to be controversial sometimes; I much prefer a controversial piece like this to a bland inoffensive movie-musical adaptation. At the very least, it began a dialogue that will hopefully continue. I greatly appreciate hearing Rhiana's perspective on the piece and look forward to seeing some New Native Theatre shows next season. MMT responded gracefully to the controversy with a note in the playbill, a brief post-show statement, and a planned post-show discussion on Thursday June 19 (the show runs through June 29).

Even though this is a hugely entertaining and fun show, it goes deeper than that. At the end of the show I was left with a feeling of sadness, that this is the way our country was built. The beautifully poignant song "Second Nature," which plays over a video montage of pivotal moments in our nation's history, says it best:


The grass grows, a prairie
A wilderness across a continent
And we take it
We clear it out and make it
In our image

The backyards, the driveways
The covered wagons rushing
Through the high planes,
The motels on the canyon
They make a second nature

And what was it for, this country
the farms and the blood across a prairie
the nation we became as we build a second nature