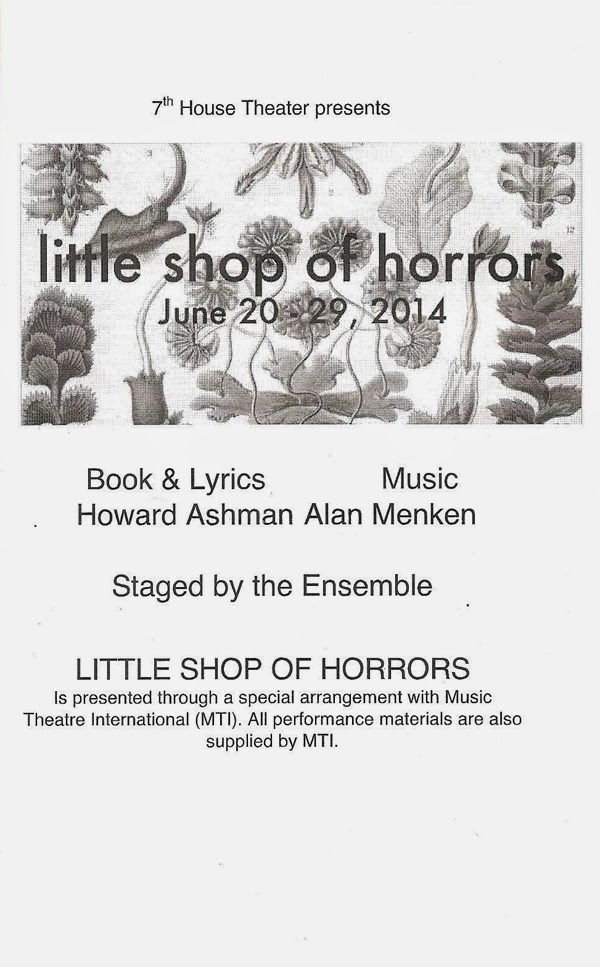 The great thing about the Twin Cities theater community is that not only can you see big lavish productions at the Orpheum, Ordway, or Guthrie, but you can also see small low-tech productions in odd or tiny spaces that will surprise and delight you every bit as much as those big productions, or even moreso. 7th House Theater Collective's 7-person (7 must be their magic number) stripped-down version of the cult horror movie turned off-Broadway musical Little Shop of Horrors is just such a show. This darkly funny and surprisingly sweet musical about a man-eating plant and the poor schlub who sells his soul to it, featuring a fun doo-wopy score, has long been one of my favorites, but I've never seen it quite like this. This talented young ensemble of seven (with no director to guide them) has put their own creative spin on this classic and created something fresh and fun and original.

If you've never seen Little Shop in any of its incarnations (see also the 1986 movie), here's a brief plot summary. Aspiring botanist Seymour finds a strange and interesting plant and brings it into Mushnik's Flower shop, where he works with Audrey. He soon finds out that the plant, named Audrey II, will only grow if he gives it blood, but in return it makes Seymour's life wonderful - the failing flower shop flourishes, Seymour becomes famous, and most importantly, he thinks it makes him look better in Audrey's eyes. But the dilemma comes when Seymour needs to find more sources of blood to satisfy Audrey II's growing appetite. He's sold his soul to the devil and there's no turning back.

On the tiny stage at Open Eye Figure Theatre, 7th House brings this morbidly hilarious world to life in a delightfully inventive and low-tech way, involving an overhead projector, a plastic shower curtain, a skull, fake blood, and a series of increasingly larger cardboard boxes. The show runs about 90 minutes including a short intermission, which feels exactly the right length. Similar to what Ten Thousand Things does in their productions, they've stripped the show down to its bare essentials to get to the heart of the piece, without any unnecessary fluff.

Company member Grant Sorenson plays Seymour with just the right mix of sweetness, lack of self-confidence, and a growing inner determination to do what he has to do to get what he wants in life, mainly Audrey. As Seymour's love, Maeve Moynihan is pitch-perfect, both in her powerful voice and in her portrayal of Audrey's charming ditziness. I've watched Maeve grow up on local stages; just six years ago she was little Carrie Ingalls in a musical version of Little House on the Prairie at the Guthrie, and now she's all grown up and playing one of the most iconic roles in musical theater. In between she was young Violet in my favorite Theater Latte Da show Violet (when I referred to her as "teenage wonder"), and Dorothy in The Wizard of Oz at the Children's Theatre (at which time I said "I only hope that after she becomes a big Broadway star she comes home every now and then to grace us with her talent"). It's a thrill to see her back on stage playing an adult, and I look forward to seeing what her bright future holds. Grant and Maeve make for a completely adorable Seymour and Audrey, and if you don't get chills at the end of "Suddenly Seymour," one of the best musical theater love songs ever written, you probably don't have a soul.

The other five members of the ensemble play all of the other roles, sometimes at the same time. Gracie Anderson, Liz Hawkinson, and Catherine Noble as the girl group Greek chorus sound fantastic and deliver the campy material the way you need to - with complete conviction. Robert Frost provides most of the musical accompaniment at the piano and serves as Musical Director, as well as occasionally getting in on the action of the show. Company member David Darrow's take on the gleefully maniacal and sadistic dentist, whether abusing poor Audrey, singing to his mother in a Norman Batesian kind of way, or getting high on laughing gas, is a true delight (and oh, by the way, he also plays guitar, trumpet, and percussion). In a clever twist, both Mr. Mushnik and Audrey II are played by the entire ensemble, which is kind of genius and turns what are usually duets into really fun group numbers in "Mushnik and Son" and "Feed Me." Seeing Seymour surrounded by the voice of the plant in several bodies gives it a whole new dimension.

This is only 7th House's third production as a company, after debuting last summer with a groovy production of Hair, followed earlier this year by the smart and sexy Cinephilia. If this group of young talented theater artists who have created a space for their work is not yet on your radar, they should be. Their next show is something that makes me very happy - a musical collaboration between David Darrow and the super talented couple Mary Fox and Blake Thomas*. Blake is one of my favorite musicians and an incredibly talented songwriter, and I got a taste of David's songwriting skills in his Fringe show a few years ago, so the two of them writing and creating together is something I would not miss for the world. Jonah and the Whale will play in the Guthrie's Studio Theater this December. But in the meantime, head to Open Eye to experience this darkly funny and delightfully inventive Little Shop of Horrors (playing through June 29 only).

*Click here to listen to Blake and Mary's radio show, Take it With You, recorded live monthly in Duluth. It's a wonderfully new and fresh take on the old radio variety shows of the past, full of hometown humor, heart, and Blake's original music.