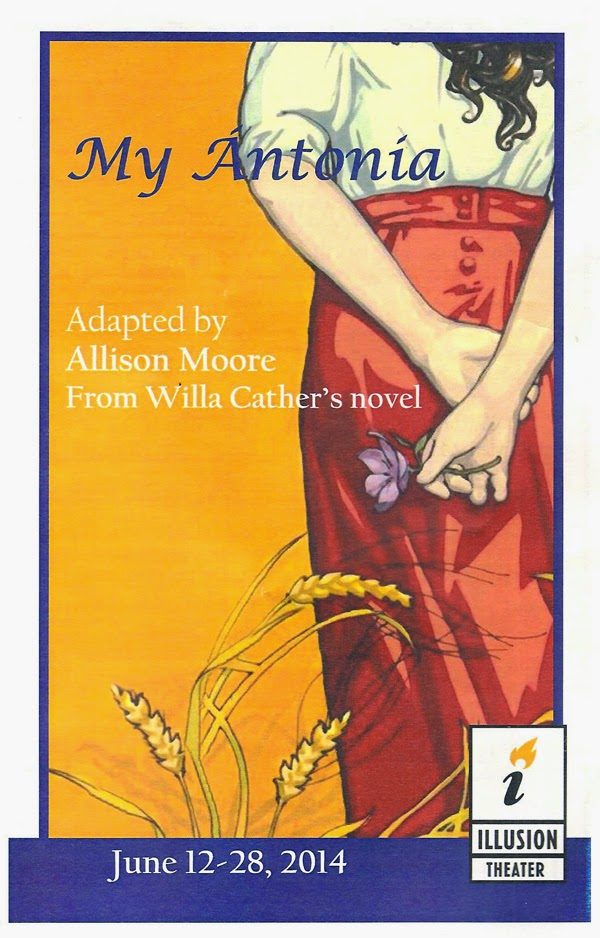 Willa Cather's 1918 pioneer novel My Ántonia is required reading in many schools, and with good reason. It beautifully brings to life a period in American history that might otherwise be forgotten, with language so poetically descriptive that you can see the landscape and feel the heartbreak of the characters. Several years ago, Illusion Theatre and playwright Allison Moore adapted My Ántonia into a play that perfectly captures the spirit of the novel. The original production won two Ivey Awards in 2010, and lucky for us Illusion continues to bring it back every couple of years and take it on tour around the Midwest. This year the production with an all-new cast visited Cather's Nebraska hometown and the farmhouse of the woman who was the inspiration for the character of Ántonia. Sitting in the Lowry Lab Theater in downtown St. Paul, I was swept away into the prairies of Nebraska, tears streaming down my face; I can't imagine how much more impactful this piece must be in the place and surrounded by the people that it so lovingly describes.

My Ántonia tells the story of a young immigrant girl in late 19th century Nebraska, through the eyes of her childhood friend Jim. The adult Jim narrates the story as he's returning home to visit, and his memories of his time on the frontier and the girl that he loves come to life on stage. We watch Jim and Ántonia grow from children playing on the prairie to young adults making their way in the world. Even though Jim and Ántonia's life paths diverge (he goes to Harvard and becomes a big city lawyer, she stays home and raises a family and a farm), they share a connection that cannot be broken by time or distance. Jim's nostalgia for the Nebraska prairie is inextricably intertwined with his memories of the girl that he knew and the boy that he was.

While I missed the original production, I did see the show two years ago and was so emotionally affected by it. I was eager to see it again and see if it's as good as I remember. It is. The wonderful new cast is led by Andrea San Miguel as Ántonia, a bright and enthusiastic young girl who grows up and goes through hardships, but never loses her love of life. Zach Keenan is the naive young Jim, while Dan Hopman is the older and wiser version of the same character, watching scenes from his past with great affection and wistfulness. This piece is a true ensemble piece, with the small cast ably playing the many roles of townspeople and their various accents; one standout is Anna Hickey as Antonia's proud and fast-talking (in Czech!) mother and farm girl turned dressmaker Lena.

A big part of the success and emotional impact of this piece is the music by Roberta Carlson. The three-piece off-stage orchestra provides a constant soundtrack to the story, and so specifically brings you to that time and place, tinged with memory. The language of the play (which I assume was largely taken from the book) paints such a picture I that almost wanted to close my eyes to better see it, but then I would have missed the simple but effective images of waving grass or a plow against the sunset projected onto the backdrop. The writing, acting, direction by Michael Robins, music, and images combine to create a feeling of nostalgia for a past I never knew, but that as a descendant of pioneer immigrants is in my bones somehow.

This incarnation of My Ántonia continues for two more weekends at The Lab at The Lowry Building.* It's a beautiful piece of theater with all elements combining to bring to life this time and place and these characters. There's a reason this one keeps coming back. It'll make your heart ache in the best possible way. (Discount tickets available on Goldstar.)

*You can park in the Lowry ramp (entrance on Wabasha between 4th and 5th) and walk right from the ramp into the theater space.