"Crimes of the Heart" at the Guthrie Theater 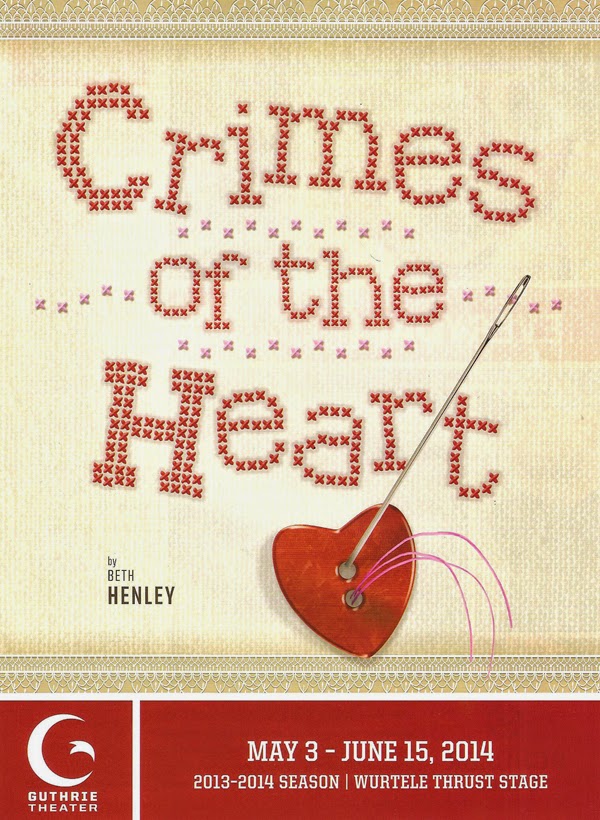 If you have not seen Crimes of the Heart at the Guthrie in the last month, you have just over a week to catch it before it closes. I was previously unfamiliar with this tragicomedy set in the South in the 1970s and was delighted by what I saw. It's darkly funny and features a very real, somewhat dysfunctional, but loving family fully and comfortably inhabited by this six-person cast.

The Magrath sisters grew up in the small town of Hazlehurst, Mississippi with their grandparents following a tragedy. As often is the case, the eldest Lenny stayed behind to care for her ailing grandparents as the other two went off into the world. Youngest sister Babe married the successful town lawyer, while middle sister Meg went off to Hollywood to find her fortune as a singer. After Babe shoots her husband, for reasons that unfold over the course of the play, the sisters reunite in their grandparents' home to "get through these real bad days here" together. The "getting through" is complicated by cousin Chick, who's always resented the sisters and is more of a hindrance than a help, and Meg's encounter with an old boyfriend. At the end of the play we don't know if Babe will go to jail, if Meg will reunite with Doc, or if Lenny will be able to stop playing family caregiver and be happy with her new boyfriend, but we do know that for better or worse, the Magrath sisters will be there for each other.

As the three sisters, Maggie Chestovich, Georgia Cohen, and Ashley Rose Montondo create very full and different characters in Lenny, Meg, and Babe. Maybe it's because they've been performing the piece for a month, but the familial bond between them is palpable. Sarah Agnew is a hoot as cousin Chick, strolling into the house like she owns it and bossing the sisters around. David Darrow brings a great energy and physicality to the role of Babe's lawyer Barnette, literally jumping around the stage in excitement. Sam Bardwell usually plays the role of Meg's old boyfriend Doc but was out on paternity leave the night I saw the show, so understudy Dustin Bronson filled in. I consider it a privilege to see understudies perform; it's so wonderful to watch someone step into a cast that has been performing together for some time and seem like they've always been there, and you know they're going to give it their all since it's one of the few times they get to perform the role. Such is the case here. This is a cast that works and plays well together, centered on the three sisters.

This is one of those Guthrie sets that I wanted to climb right into and sit down with a glass of lemonade. James Youmans designed the cozy and lived in Magrath home with see through walls, so that you can see the blue sky and power lines behind it. The '70s period costumes by Clint Ramos are super cool, from Meg's Charlie's Angels outfit and classic wrap dress, to Barnette's three piece bell-bottom suit, to Chick's perfectly tailored bright-colored suits with matching shoes.

Crimes of the Heart is funny, tragic, poignant, and engrossing. Go visit these sisters at the Guthrie before they depart and move on with their crazy lives.