"Berlin to Broadway with Kurt Weill" and "Candide" by Skylark Opera at E.M Pearson Theatre 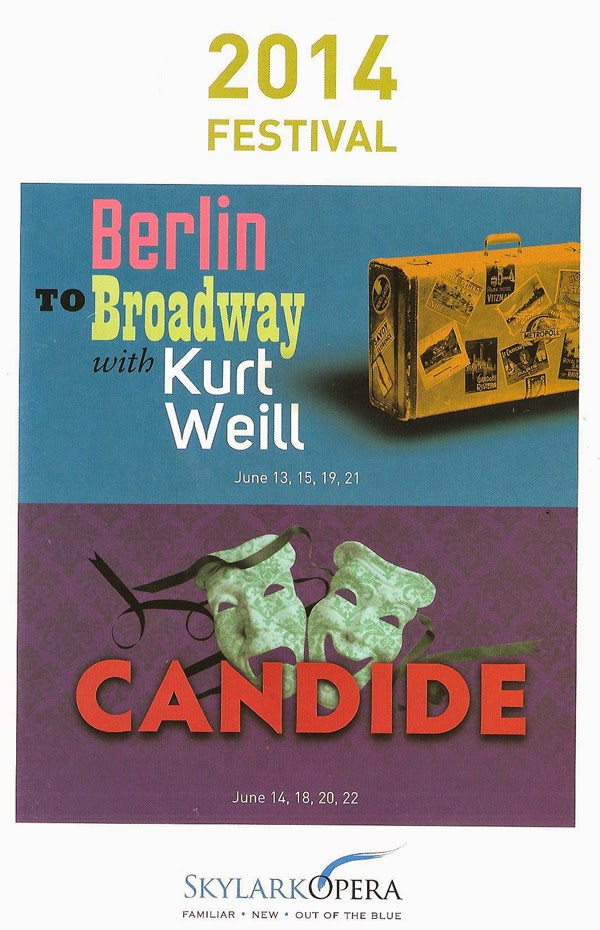 For their annual summer festival, Skylark Opera is presenting the Leonard Bernstein classic operetta Candide and the musical revue Berlin to Broadway with Kurt Weill. The two shows run in rep, with just four performances each over two weekends. I've attended the festival for several years now, and as a musical theater geek who doesn't know much about opera, I always appreciate seeing shows that fall on the more opera side of the music-theater spectrum, presented in an accessible way (Skylark always performs in English) with fantastic casts and musicians performing beautiful music. This summer's shows are both wonderful examples of that.

Berlin to Broadway with Kurt Weill
Rather than a traditional musical or opera with characters and plot, this piece is a compilation of songs by German-American composer Kurt Weill. I have only recently become familiar with Weill, first at last year's Patti LuPone concert in which she sang several of his songs, and then just this spring, when I saw not one but two productions of Weill's most well-known work, The Threepenny Opera. What I liked best about Threepenny was the music, and the more I hear it the more I like it. Berlin to Broadway is a beautiful showcase of the work of this great composer and his complex, interesting, and gorgeous melodies. It's the kind of music that the more time you spend with it, the more you appreciate it.

Four singer/actors and a six-piece band, under the direction of Sonja Thompson, lead us through the life of Kurt Weill, from the beginning of his career in Berlin, to his exile in the Nazi era to Paris and eventually America, to his growing success in his new homeland. The songs are structured chronologically, with one or another of the actors giving a short explanation to establish place and time. Several songs from each piece are presented together, giving us a taste of what the show is like. Wendy Knox, who also directed Frank Theatre's recent production of Threepenny, directs the piece and has truly created a whole that's greater than the sum of its parts. Songs and shows flow from one to the next, with visual interest created by slight costume changes and movement around the stage. It's almost like seeing several little shows in one great show.

This four-person cast is a dream - Christina Baldwin, Dieter Bierbrauer, Vicki Fingalson, and Bradley Greenwald. This is my first time seeing Vicki onstage, but she fits right in with the other three who I already knew were wonderful. Each of these four voices is stunning on its own, and all of them joined together in four-part harmony is something quite special. But these professionals don't just sing the songs, they also act the songs, adding humor or pathos where required. Some of my favorite moments from the show are: the entire Threepenny section because that's the music I'm most familiar with; Dieter and Bradley singing the rousing "Bilbao Song" (Bradley Grünwald und Dieter Bierbrauer singen auf Deutsch, es war das Schönste auf der Welt!); Christina singing the classic "Pirate Jenny;" Bradley singing the poignant "September Song;" Dieter's absolutely lovely rendition of "Lonely House;" Vicki's sweet love song "That's Him;" and the comic highlight - Christina's hilarious "Saga of Jenny" backed up by Dieter and Bradley.

In short, Berlin to Broadway with Kurt Weill a wonderful exploration of the life of an important musical composer, one I didn't previously know much about, with gorgeous music sung by four impeccable voices.

Candide
Leonard Bernstein is another great American composer, and this 1956 operetta is one of his most celebrated works. Unfortunately it was bogged down by a troublesome book that went through several rewrites over the years. Skylark is presenting a combination of two more recent and more successful revisions. Based on the 18th Century novella by Voltaire, Candide is a satire that skewers the establishment of both 18th Century France and 1950s America. In the broadly comical plot, the bastard Candide is thrown out of his uncle's castle after falling in love with his cousin, the lovely Cunegonde. War breaks out, the castle is destroyed, everyone thinks everyone else is dead, the lovers reunite and travel the world looking for a place to be happy. Lots of other crazy things happen, which eventually disavow the optimist teachings of Dr. Pangloss, that we live in "The Best of All Possible Worlds" and everything that happens is perfect and wonderful. It's a wild romp accompanied by beautiful music.

The huge cast and twenty-plus piece orchestra create a rich and luscious sound, with only three microphones hanging overhead to provide additional amplification of these beautiful trained voices. As the title character, Peter Middlecamp sings like a dream. Jennifer Baldwin Peden (yes, Christina and Jennifer are sisters - such talent in one family!) is adorable and hilarious as Cunegonde, and does unbelievable things with her voice, especially in the famous aria "Glitter and Be Gay." Gary Briggle plays Voltaire, a sort of narrator and guide through the show, and he's wonderfully ridiculous in the other characters he plays. All of these elements combine and build to the stunningly gorgeous finale, "Make Our Garden Grow." This song almost feels like it's from another show; up until then all of the songs are comic and tongue-in-cheek, but this song is unabashedly sincere and completely lovely.

The two productions share much of the same creative team, including set designer Ann Gumpper, with the moving staircase set pieces being used for both shows. Costume Designer Lynn Farrington has put the Berlin to Broadway cast in classy period clothing, with a few accessories for some of the roles being played. The wardrobe for the Candide cast is more colorful and cartoonish, with the ensemble wearing Converse tennis shoes.

If you're an opera lover, then Skylark Opera's Summer Festival should be on your must-see list. If, like me, you're a bit of a novice when it comes to opera, don't be intimidated. Skylark makes opera fun and accessible, and has chosen two important 20th Century American composers in Kurt Weill and Leonard Bernstein, brought to life by not one but two groups of talented singer/actor/musicians. Both shows have just a few more performances this weekend, pick one or both and go see some opera on a summer evening.