"Sasquatched! The Musical" by Imagined Theatre at the Sabes JCC Theater 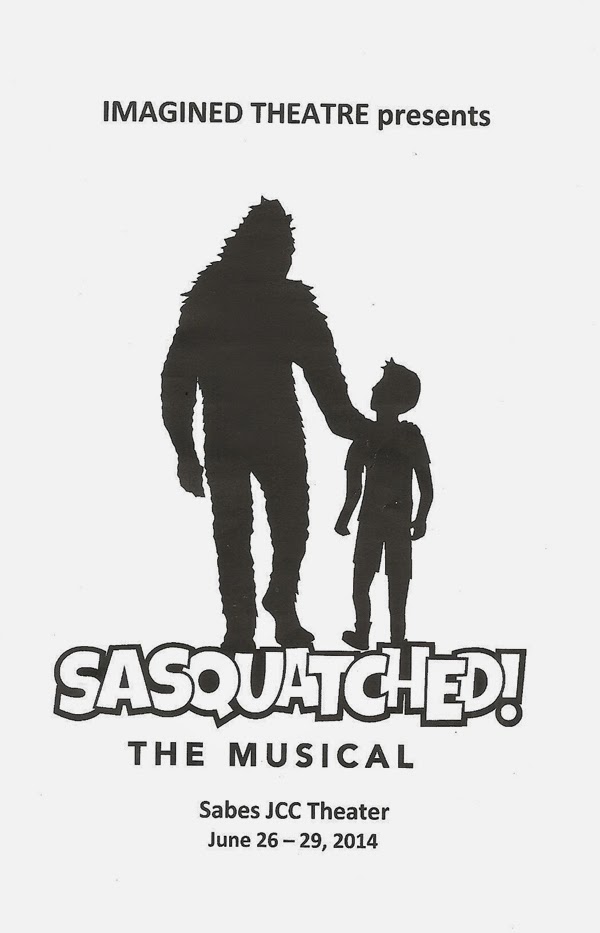 The new original musical Sasquatched!, written by local playwright and composer Phil Darg, premiered at the New York Music Theatre Festival last year and has now come home to a series of shows in the Twin Cities this summer. It's a fun, silly, family-friendly musical with catchy songs that doesn't take itself too seriously. It's nothing ground-breaking, but it's cheesy good fun for the whole family.

In Columbia National Park in the Pacific Northwest, we meet Arthur, a "Sasquatch American" who doesn't fit the image of Bigfoot. Yes he's big and hairy, but he's also intelligent, well-spoken, and kind, a true gentle giant. He's lost and trying to get back to his family when he meets Sam, a lost little boy. In the tradition of a child befriending an alien creature (see also E.T. and ALF), the two become friends and help each other through their predicament. In the meantime, many people are looking for Sam and "Bigfoot," including Sam's "Helicopter Parents," a park ranger, the hosts of a reality TV show called Modern Monsters, and some locals who are hoping to profit from the discovery of Bigfoot. Eventually everyone works together to protect Arthur from those who are trying to exploit him and his kind, so that he can live a quiet happy life in the Sasquatch community in a remote area of the park.

This production of Sasquatched!, directed by creator Phil Darg and his wife Jules, features a new local cast, and I can only assume it was improved from last year's version by Jim Lichtsheidl's "Storieography" (his word for choreography and movement and such). One way it was not improved is by the use of pre-recorded music instead of a live band. The NYMF production lists a music director and assistant music director, so I assume they had live music. As a former band geek I take offense at that, and frankly, canned music just sounds cheap and karaoke-like. How can you respect a musical with no live music? The show would be greatly improved by ditching the track and adding even just a keyboard, guitar, and percussion.

I love a show that knows what it is (namely, silly campy fun) and doesn't take itself too seriously. It even pokes gentle fun at the medium of musical theater with winking comments to the audience like "it's been three dance numbers since we've seen them," and the song "Rhubarb" in which the chorus sings about, well, being a chorus. The large cast jumps wholeheartedly into this spirit with broad comedic performances. Except for Dylan Omsted as Arthur, who really is the straight man amongst the wackos, the calm center with a big deep voice one would expect from Bigfoot. Young Alex Michuda is pretty adorable as Sam, Cayla Marie Wolpers and Rick Baustian provide a great skewering of reality TV show hosts (the latter is a cross between Bear Grylls and Phil Keoghan with a Kiwi accent), opera-trained Roland Hawkins has a gorgeous voice and tongue-in-cheek performance as the proud seismologist, and Ali Daniels is charming as his love interest, the spunky park ranger. The show also touches on issues such as environmentalism, reality TV, the media, and overparenting, albeit in a pretty light-hearted and not very deep way.

Sasquatched! continues this weekend at the Sabes JCC Community theater, followed by free outdoor performances in Maple Grove, and a two week run at the Old Arizona in late July (click here for details). Bring your family for some fun summer musical theater.