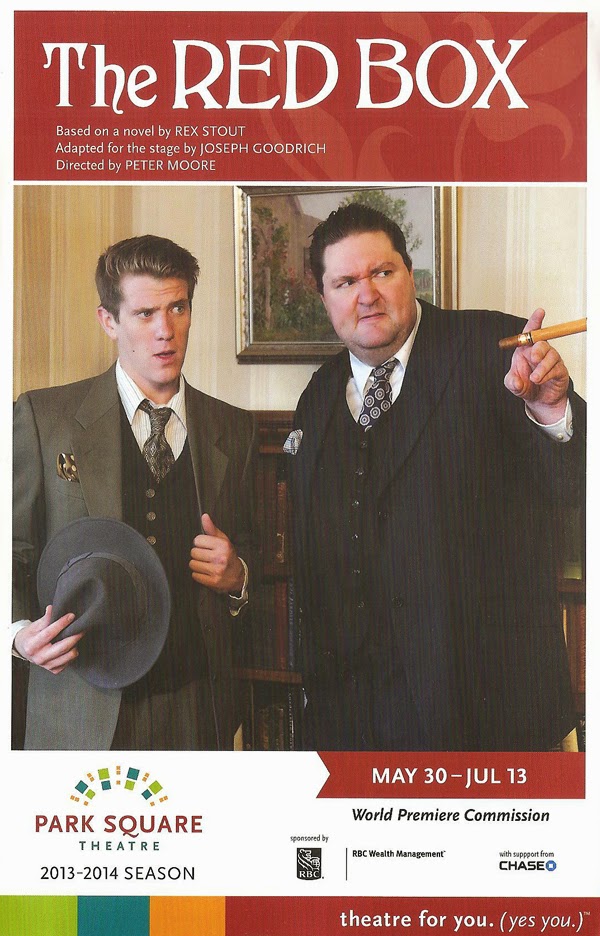 I love a summer mystery at Park Square Theatre. Taking a break from Sherlock Holmes (The Adventure of the Suicide Club last year and The Ice Palace Murders next year), this summer's mystery comes from American author Rex Stout, who wrote over 70 novels and short stories over a period of 40 years about his crime-solving hero, Nero Wolfe. Nero is similar to Sherlock in that he's a brilliant and quirky character who relies on his sidekick to help him function in the world. Although Stout's stories have been adapted into numerous films and TV shows, this world premiere production of The Red Box is the first stage adaptation. Smartly written by playwright Joseph Goodrich, sharply directed by Peter Moore, with beautifully detailed period costumes and set, and energetic, precise, yet loose and comfortable performances by the entire cast, The Red Box is fun and entertaining summery mystery theater.

The Red Box is the fourth Nero Wolfe novel and is set in 1936 in Nero's NYC brownstone. Nero rarely leaves the house, preferring to spend time with his orchids, his beer, and the delicious gourmet meals prepared by Fritz, his personal chef. Instead, he sends his "boy Friday" Archie Goodwin out into the world when required. In the case of the titular red box, Nero is hired by a young man named Lew Frost who's concerned about his cousin Helen's safety after her friend is poisoned. Soon Lew's father and Helen's mother get involved, as well as family friends. What unfolds is a complicated family drama full of secrets and half-truths. Nero attempts to untangle this mess and get to the truth of the murder(s) by interviewing the parties involved, while Archie dutifully takes notes and adds his two cents. He also works with a police inspector, although it's unclear who's helping whom. It's a suspenseful mystery that will keep you guessing, but the real fun is watching these characters as they navigate the waters of this story.

This fine nine-person cast is led by E.J. Subkoviak and Sam Pearson, both of whom are on stage for most of the show. E.J. is just perfect as Nero Wolfe - smart and stoic, thoughtfully pouring and drinking his beer, taking pleasure only in the descriptions of the meals he's about to eat. Sam is obviously having a great time playing Archie Goodman, which means he's great fun to watch, delivering the prologue and epilogue directly to the audience with a smirk and a wink, doling out one-liners with an arched brow and a flip of his hair. Other standouts in the cast include Michael Paul Levin as the frazzled police inspector, and Jim Pounds, in a dual role as Nero's chef/butler and the mysterious Frenchman.

The set by Rick Polenek is a beautifully detailed reproduction of Nero's NYC brownstone office, full of fine furniture, books, and artfully placed objects. I'm a sucker for period costumes, and these (designed by A. Emily Heaney) are gorgeous. From the men's three-piece suits and fedoras, to Archie's sweater vest, to the women's demure dresses and hats. The whole production is top-notch; even the scene changes are done well - the lights dim, characters remain in character as they leave or enter the room, Fritz comes through to clear glasses and rearrange props.

The Red Box is about halfway through its six-week run at Park Square Theatre in lovely downtown St. Paul. It's smart, sharp, funny, suspenseful, and entertaining - the perfect summer mystery play.