"Cinephilia" by 7th House Theater Collective at the Q.Arma Building 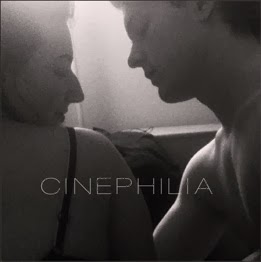 I admit it, I'm not a movie buff. I spend so much time at live theater that I rarely have time to go to a movie theater. And I grew up watching TV, not old movies, so my education in classic cinema is sorely lacking. Not so the characters in the play Cinephilia. They live and breathe movies, and speak to each other in movie quotes like my cousins speak to each other in Friends quotes (or I sometime speak in musical theater quotes). But of course, the play is not about movies. Rather, movies are the language through which playwright Leslye Headland explores the ideas of relationships, sexual politics, friendship, and self identiy. 7th House Theater Collective has chose Cinephilia as it's second production, following last summer's wildly successful production of the American Tribal Love-Rock Musical Hair. As a new theater company, they and the audience are still figuring out who they are and what sort of work they want to do.This is a great choice and continues them on a nice trajectory - the grass-roots hands-on feel of a small theater company, an intimate staging, and a youthful and modern production (yes Hair is set in the 60s, but its themes are timeless). I look forward to seeing where they go next.

Cinephilia unfolds on one night in the Brooklyn apartment of longtime friends and roommates Johnny (Torsten Johnson) and Plato (company member Grant Sorenson). Johnny's on-again-off-again lover (but not "girlfriend") Arden (Miriam Schwartz) wants more from him than he's willing to give, and is upset when he announces his plans to move to L.A. Plato walks into this argument and adds his opinions (and also much humor); it's clear these three have a comfortable, yet sometimes contentious, friendship. The arrival of Johnny's new girlfriend Natalie (company member Cat Brinidisi) complicates the situation further, as more secrets are revealed.

All four characters are cinephiles (and sort of movie snobs), and constantly talk about their favorite movies and directors, sometimes acting out entire scenes. One particularly important movie that seems to bear some resemblance to these characters' lives is Splendor in the Grass (which of course I've never seen but now really want to!). There are so many movie quotes in this play, and not being a movie buff, most of them I didn't recognize. In fact I'm sure many quotes went by that I thought was just original dialogue in the play. I imagine this would be quite a fun play for actual cinephiles, although a knowledge of film history is certainly not necessary to enjoy the play.

The production takes place in the Q.Arma Building in NE Minneapolis - a very cool non-traditional theater space. A small corner of the room represents the Brooklyn apartment, with big windows looking out on the dark cold Minnesota night. About 40 folding chairs are set up facing the set; an intimate setting that allows you to get up close and personal with the work. With direction by company member David Darrow, the entire cast is great, so present and committed to their roles. And they need to be; in a small space like this there's nowhere to hide.

I should warn you that there is frank sexual language in the play, but nothing you wouldn't hear on an episode of Girls. In fact it reminded me a bit of the Lena Dunham-penned HBO series, in that it's set in Williamsburg, Brooklyn, features much sex and (semi) nudity, and showcases a group of friends who sometimes don't treat each other very well, but remain friends in spite of this. But the tone of Cinephilia is quite different from Girls. Where Girls is almost absurd and mocking in its comedy, Cinephilia feels more real and grounded. But also like Girls, none of these four characters are very likeable; each of them angered or frustrated me at times. Like many young people in their 20s, they can be pretty self-centered with not much self-awareness. But each has their sympathetic moments too. At one point Johnny says that he feels no one really knows him. Maybe that's because he's always speaking through the voice of movie characters. I'm not sure he even knows himself. Johnny escapes into movies and uses them to keep from becoming too invested in anyone or anything real.

If you love movies, or site-specific intimate theater, or if you want to see a group of smart, young, talented, dedicated theater artists creating a space for their work, you might want to check out this play. But act fast, only five performances remain (Sunday and Monday night, and next Friday, Saturday, Sunday). At just $10 a ticket (email for reservations or just show up), it's a bargain, and a great opportunity to see what the up-and-coming young theater community is up to.