"Tristan and Yseult" by Kneehigh Theatre Company at the Guthrie Theater 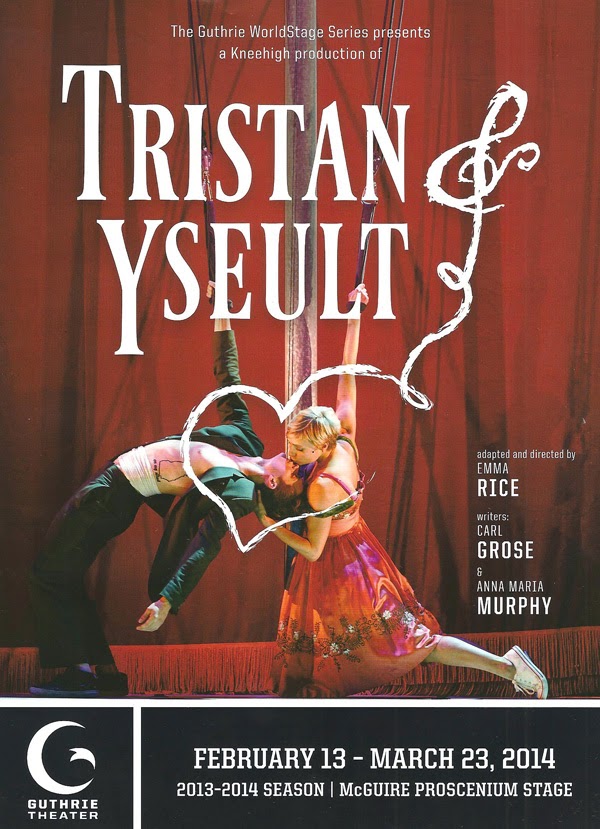 "Warning: You may come in contact with latex balloons." Not something you see often at the theater, but if there's anything I know about Kneehigh, a theater company out of Corwall, England, it's to expect the unexpected. Four years ago they brought their delightful adaptation of the movie Brief Encounter to the Guthrie Theater, and then to Broadway, where it was nominated for two Tony Awards. I saw it at both locations and found it absolutely delightful - fresh and innovative and imaginative. Kneehigh returns to the Guthrie with Tristan and Yseult - how fitting that a Cornish theater company would adapt the legend about the forbidden love between a Cornish knight and an Irish princess (see also the Wagner opera Tristan and Isolde). Kneehigh's production premiered over ten years ago and is currently on a US tour, and it's just as fresh and innovative and imaginative as the last time I saw them.

Here's a little tip for you - get to the theater early to be entertained by the band at the "Club of the Unloved," with a white-gloved, cat eye glasses-wearing lady singing standards like "Crazy" and "Only the Lonely." Meanwhile, people in black rain jackets, knit hoods, and thick glasses are wandering around with binocolars taking notes. As the show begins, we learn that they are members of the Club, constantly on the look out for love and lovers. Through them we learn the story of Tristan and Yseult, as the hoods come off and the actors become characters in the story. Tristan is sent by King Mark to retrieve Yseult from Ireland to be his bride. Along the way they fall in love due to a love potion. But upon arriving at Cornwall, Yseult finds that she also loves Mark. What follows is a beautiful and tragic love triangle.

Kneehigh is able to tell this story with the deep emotion it requires, but also with a lightness and playfulness and sense of wonder. In addition to the aforementioned balloons (which require a bit of audience participation), they make use of swings, ropes, pulleys, trampolines, many musical instruments (played by the four-piece band and ensemble members), and other props. In the middle of the stage is a circular raised platform where the main action takes place. In one scene the main characters swing from ropes, and it's almost as entertaining to watch the people on the other end of the ropes as they throw themselves off the platform and run to the end of the stage to lift them off the ground.

Most of the actors in the eight-person ensemble play the knit-hooded members of the Club of the Unloved as well as characters in the story. Standouts include Etta Murfitt and Andrew Durand as the lovers, Giles King as the King's jester-like right hand man, and Carly Bawden as the white-gloved lady known as "Whitehands" (until we discover her true identity), who functions as the narrator and also the primary singer, moving the story along and providing commentary. But I think my favorite of this great ensemble is Craig Johnson (not to be confused with the local actor/director), who is equally great as the dangerous Irish invader who comes in like a ganster and Yseult's lady's maid, a role which could have been merely played for laughs (which it is to some extent, note her hilarious entry to the stage), but Craig also lets us see a real and tender-hearted side to the character.

Kneehigh Theatre is so unique in what they do, incorporating physicality, music, aerial work, and other innovative elements, and infusing such heart and playfulness into their work, that I would have recognized Tristan and Yseult as a Kneehigh production even if I hadn't known. They're in town through March 23, check them out for a truly unique and delightful theater experience.