"The Incredible Season of Ronnie Rabinovitz" at the History Theatre 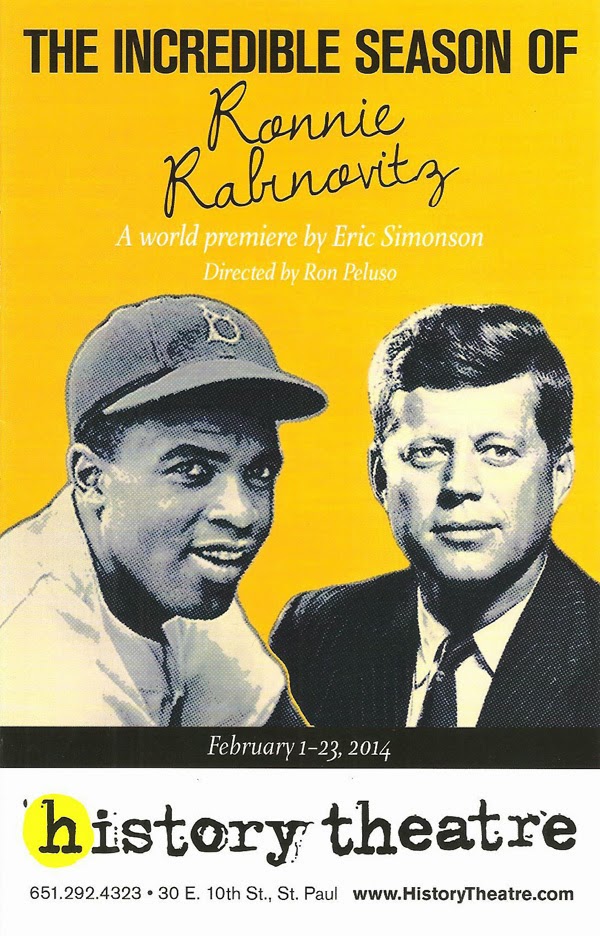 This really is an incredible true story. In 1960, a 15-year-old Wisconsin boy was friends with both Jackie Robinson, who broke major league baseball's color barrier, and the 35th American President John F. Kennedy. One would think that this was a story made up to create a great play, except that it's true. Ronnie Rabinovitz met JFK through his father, a prominent lawyer in Sheboygan who worked on Kennedy's campaign in the 1960 presidential primary. Ronnie also wrote fan letters to Jackie Robinson, who responded, leading to a lifelong pen-pal relationship that included telephone conversations and in-person meetings. When the History Theatre's Artistic Director Ron Peluso heard this story, he commissioned Midwest playwright Eric Simonson to write a play about it, which was presented as part of last year's "Raw Stages" new works festival. The Incredible Season of Ronnie Rabinovitz is now being presented with a full production at the History Theatre's downtown St. Paul stage. It's a really engaging and entertaining look at baseball, politics, and civil rights through the eyes of one precocious teenager.

There's lots of fourth wall breaking in this play, with Ronnie beginning the play talking directly to the audience and acknowledging that this is a play in which he's telling his remarkable story, and breaking into the action several times to explain things to the audience. It's quite a clever and effective device, a great way to relax and engage the audience. The action of the play flashes back and forth between two evenings when the two Jacks are in the Rabinovitz home on separate occasions. Kennedy wants Robinson's support in the election, and asks Ronnie's father to talk to him about it. But Robinson supports Humphrey first, Nixon second, and won't be budged. A scene showing the meeting of the two men explains why. Already retired from baseball in 1960, Jackie was active in Civil Rights, and his visit to Wisconsin prompts racist graffiti that seems to upset Ronnie's father more than it does Jackie.

The strong cast begins with the adorable and exuberant Jack Alexander as Ronnie. Mark Benninghofen is great as always as his father, and Teri Park Brown provides much of the comic relief as his mother. Peter Middlecamp plays JFK with the suave charm a Kennedy requires, and Ansa Akyea is comfortable in the role of Jackie Robinson, which he also played in Children's Theatre Company's Jackie and Me last year. Rounding out the cast are E.J Subkoviak with an amusing turn as the sheriff, and Jim Stowell as a frustrated striker.

The very cool set (by Rick Polenek) looks like it's from a 1960s TV show. But not with the harsh realism of Mad Men, more like the nostalgia-tinged sitcoms from the era. Picture Rob and Laura Petrie's living room, in color. In fact that sums up tone of the play as well, it's a little like a 1960s sitcom, with the precocious child, the hard-working, stern, slightly comic father, and the apron-wearing mother making her husband drinks and hors d'ouevres. It just so happens that into this sitcom wander two of the most famous Americans of the 20th Century. The play includes many amusing local references (cheese curds!), although I couldn't figure out why Wisconsonites would be Atlanta Braves fans, until I discovered that they were the Milwaukee Braves until 1965, and the Brewers didn't arrive until 1970.

The Incredible Season of Ronnie Rabinovitz is the History Theatre doing what it does best - presenting an entertaining and informative new play about a moment in Minnesota (er, Wisconsin) history that has larger implications to American history. It's an entertaining, engaging, nostalgic look back at the extraordinary friendships of one ordinary youngster. Playing through February 23, with discount tickets available on Goldstar.com.*

*If you've never used Goldstar.com, I highly recommend that you sign up. They offer half-price (or better) deals for many theaters around town. You'll receive a weekly email that will tell you about some of the deals available. Click here for more information and to see all of the great deals currently offered.