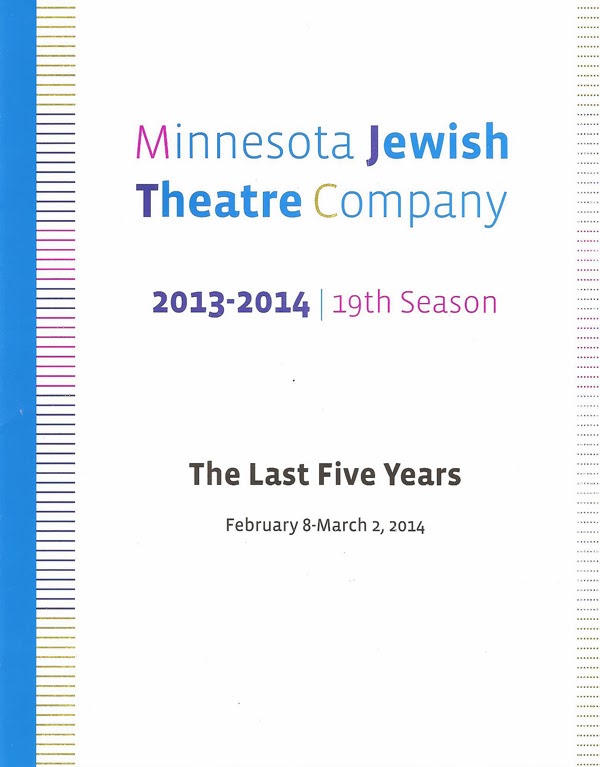 This was my second time seeing the Jason Robert Brown cult hit musical The Last Five Years, and I think I enjoyed it more the second time around. It's a complicated piece, both in structure and emotion, so it benefits from repeated viewings. This production by Minnesota Jewish Theatre Company employs a much simpler staging than the Flip Theatre production I saw last fall, with minimal set pieces and no microphones, which serve the intimate two-person 90-minute musical well. Already familiar with the story and structure, I was better able to appreciate the emotion of the story and Jason Robert Brown's fantastic score.

The premise is simple, but told in a complex way. A man and woman meet, fall in love, grow apart, and split up. The unique thing about this familiar story is that one half of the couple tells the story (through song) chronologically, while the other half is simultaneously working through the story backwards from the end. The show begins with a heartbroken Cathy singing about the end of her marriage and a newly lovestruck Jamie singing about this girl he just met. The two timelines cross in the middle when Jamie proposes to Cathy, and continue on to their ultimate conclusions - Cathy happy and hopeful at the beginning of the relationship, Jamie sad and conflicted at the end. It's quite fascinating to watch a relationship grow and disintegrate at the same time, and see how much these two people love each other but realize that they just can't make it work.

As Cathy, Sarah Shervey* is sweet and sympathetic, with a lovely voice. Matt Rein as Jamie is charming and much more likeable than my first experience with the show. In a post-show talk back, director Kevin Dutcher (who does a fine job with this "puzzle" of a piece) said they made a conscious decision to make Jamie less of a "dick," and it works. Seeing the show this time I didn't think that either one was solely to blame for the break-up, but could see that they both contributed to the sad conclusion. The interesting thing about this pieces is that you only see the couple connecting together for one moment in the middle, but Kevin chose to begin the show with a brief happy moment between the two so the audience could see just what it is that's lost. He calls their one duet "The Next Ten Minutes" the "payoff" for "desperately wanting to see them together," and he's right. The two characters might be on stage at the same time at several points throughout the show, but they're never together in the moment except for that one song, and it's all the more bittersweet for it.

On the small stage at the Hillcrest Center Theater, the four-piece band is behind a screen. The forefront of the stage consists of a few city sketches as backdrop, with simply a chair and table for furniture (set design by Dan Wold). There's very little transition time lost between scenes as one song flows into the next. In a piece like this, less is more.

There's no question that Jason Robert Brown's The Last Five Years is deserving of its popularity, and I welcomed the chance to spend more time with it. This is a nice production with a charming and talented cast, and a simple staging that lets the story and the songs shine through. Playing weekends only through March 2.

*I was told that both leads were sick with colds on the day I saw the show, so they might not have been at their best. But what I saw was still pretty great.