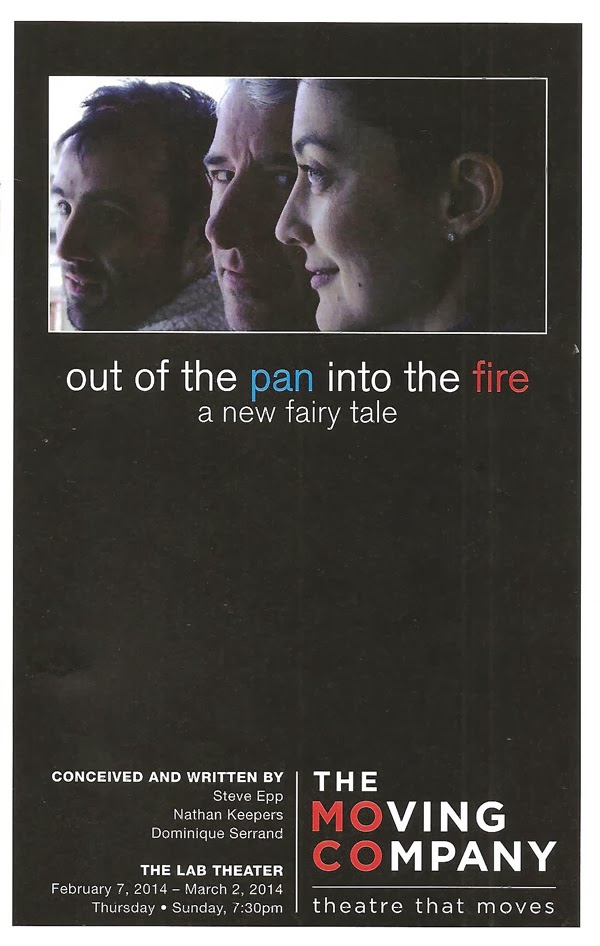 The Moving Company is bringing back last year's hit Out of the Pan Into the Fire.* Even though I saw it last year, I was very happy to see it again. It's that kind of play that is so rich it benefits from multiple viewings, plus there have been a few tweaks and changes. Like everything that The Moving Company (a newish company that is a descendant of Theatre de la Jeune Lune) does, Out of the Pan is highly creative and inventive, marvelously acted by company members, and delightfully unique. A new original fairy tale inspired by the classics collected by the brothers Grimm, but bearing no direct resemblance to any of them, Out of the Pan Into the Fire is at times amusing, moving, poignant, odd, sad, and sweet. If you missed the show last year now is your chance to see it, and especially if you've never seen what The Moving Company can do, this is a must see for local theater lovers.

Serving as a storyteller and narrator, as well as a character within the drama, the endlessly watchable Steve Epp plays Angelo. He begins the show reading a story from a book, a story from "a time when wishing was of some use," and then takes part in that story. Angelo collects children to raise and then send off into the world, and is left with just two oddballs who've never quite left. Elsie (Christina Baldwin like I've never seen her before, but just as captivating as always) is the super smart young woman who knows everything but has experienced nothing. She's deathly afraid of leaving her safe home and going out into the world. She's a sort of awkward child-woman, dressed in rags and dorky glasses with clothespins in her hair. Her brother Thirteen is her exact opposite - dumb as a rock and afraid of nothing, because "he doesn't know enough to be afraid." In Nathan Keepers' usual physical style of character creation, Thirteen is like a big eager happy puppy dog, who only wants to be loved and be happy and play with his best friend, potato. Christina and Nathan created a beautifully doomed romantic couple two years ago in Werther and Lotte, and now with Elsie and Thirteen they have created a funny, sweet, and genuine sibling relationship. This odd little family is happy, but Angelo knows that he has to send his children out into the harsh world to complete their development as human beings. Angelo leaves so that Elsie will have to face the world and experience the heartbreak that goes along with it (for true wisdom is knowledge plus experience), and Thirteen will learn fear (which is, as Elsie tells him, dread plus reverence). They encounter the exceedingly creepy Stumpfmutter (Justin Madel), who is like something right out of the darkest German fairy tale. Growing up is hard, as these two overgrown children learn, but entirely necessary and in the end, rewarding.

The world in which this story takes place is quite magical, and the set from last year's production at the Southern Theater has been transported to the Lab Theater exactly as I remember it. The Southern and the Lab are two of my favorite theater spaces in town, both with gorgeous open spaces, but the Lab feels a little more intimate and close to the action. There is so much to look at in this set, my favorite of which are the little chairs in graduated sizes, from child-sized to doll-sized. The set (designed by director Dominique Serrand) is comprised of odd spaces created by cardboard, a locker, a raised stage area, plastic garbage bags, and various other compartments. There are secret doors and windows, from which characters suddenly appear and disappear (leading to several moments of "how'd they do that?!"). Delightful and surprising things happen with the set and props; there is wind, ice, rain, feathers, blood, and dirt (without spoiling everything, there is significant clean-up that must happen between shows).

The cool thing about The Moving Company is that often the actors help in creation of the work (this one was written by Steve, Nathan, and Dominique), so that the characters are suited to the particular talents of the actors, whether it's Nathan's crazy physicality, or Christina's lovely voice (which she does use here, singing a beautiful Rilke poem in German), or Steve's great storytelling. Watching the three of them play in this strange and magical world is a joy. One that you really must experience to fully comprehend. Check them out at the Lab Theater through March 2.


*Yes, I borrowed liberally from what I wrote last year. But don't accuse me of plagiarism, I gave myself permission to use my words.