"The Doyle and Debbie Show" at New Century Theatre 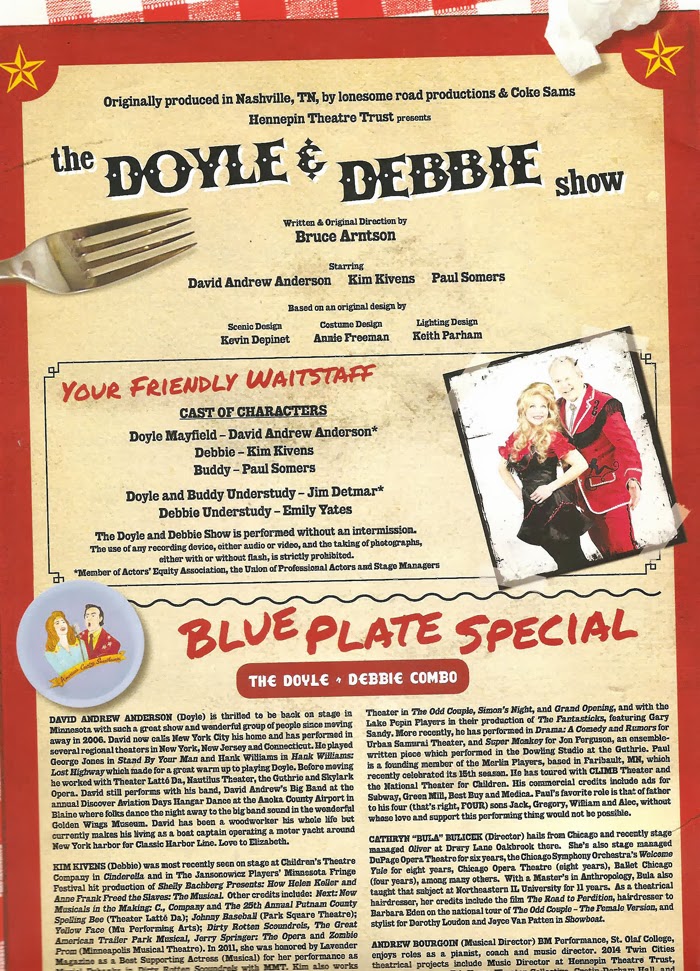 Wednesday night is usually Nashville night in my house. But last night I decided to postpone my date with the deliciously soapy look at country music to see The Doyle and Debbie Show, a warped and wacky version of that same scene. There's plenty of drama in this relationship, but instead of singing at the Bluebird, country duo Doyle and Debbie are making their comeback at The Station Inn (a real-life Nashville music establishment where the show has performed). It's very funny and entertaining with committed performances by the three-person cast and some really great country-sounding songs, with just one serious flaw (more on that later).

As one half of the famed country duo, Doyle has seen some hard times (divorces, alcoholism, fraud, and various other scandals). He discovers a new "Debbie" singing in the VFW and hires her to go on tour with him and bring back the old Doyle and Debbie act. The hard-working single mother puts up with the misogynist and slightly crazy Doyle to get her one big chance in Nashville. The show consists of the duo singing old and new hits, interspersed with stage banter and a few glimpses into the not-so-happy backstage life.

Although I'm no fan of what passes for country music on the radio today, I love that good old Country-Western sound, and the original music in this show hearkens back to that. Written by Bruce Arntson (who also performed in the original Nashville version of the show), the dozen or so songs include ballads, up-tempo numbers, and some fantastic harmonies. They're really wonderful traditional country songs, but with completely ridiculous lyrics that poke gentle fun at the common themes of the genre. There's the overly patriotic song, the cheated-on woman song, the sappy love song. But all of them take it to the extreme so that you're laughing and grimacing while taping your toe to the rhythm.

A big reason why I chose to see this show is Kim Kivens, who is absolute perfection in everything she does (see also, the ridiculously hilarious political satire Shelly Bachberg Presents...). As Debbie, she has completely transformed both her singing and speaking voice into an authentic Country-Western sound, with shades of Dolly and Loretta. Even the way she says Doyle is perfection. She sings these ridiculous songs with absolute conviction, and lets us know exactly how Debbie feels about Doyle with every sideways glance as she tries to pretend for the audience that everything's OK. As Doyle, David Andrew Anderson is her equal, mastering that slightly nasal (in a good way) country sound and almost making this jerk sympathetic. The two create some beautiful harmonies together, even if the words they're singing are the likes of "when you're screwin' other women, think of me" and "I peed your name in the snowbanks of life." Also good is Paul Somers as their reliable "band leader" Buddy, who tries to help Debbie keep Doyle in line.

And now we come to the bad news. Unfortunately this production does not include a live band; they sing to a recorded track (I doubt they'd be able to get away with that in Music City). This is one of my least favorite things in musical theater, to which I take offense as a former band geek. I wish the producers had shelled out a few more bucks to hire some musicians; the experience would be greatly improved with a couple guitars and a fiddle, and would be worth an increase in ticket price. It would feel more like a real Nashville club, rather than a really excellent karaoke performance. The "band leader" counts down and then pushes a button on his laptop. Add a live band, and maybe some wait service to bring out drinks during the show, and The Debbie and Doyle Show could be a fantastic immersive country music satire experience.

The Doyle and Debbie Show is playing at Hennepin Theatre Trust's New Century Theatre, which is set up as a country bar, with tables in the audience and photos and music memorabilia on the walls, and has been extended through May 11 (check out the discount tickets on Goldstar). It's a fun and entertaining 90 minutes featuring some great original country songs well performed by the cast.