A Dress Rehearsal of Ten Thousand Things "The Music Man" 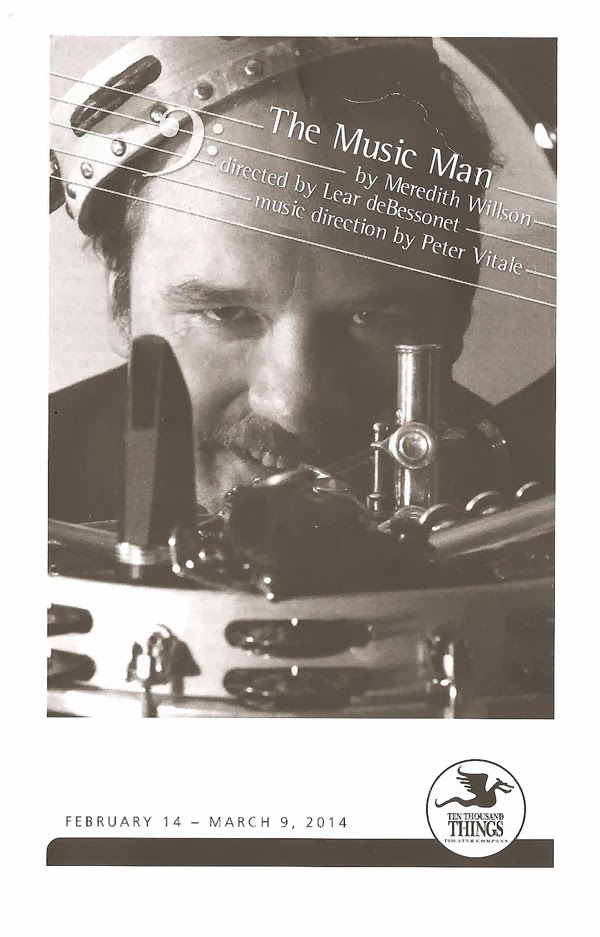 Friends, I experienced a rare treat last week. I attended the final dress rehearsal for Ten Thousand Things' new show, The Music Man, and it was scrumptious! They posted an open invitation on their Facebook page so I was sure the seats would be filled. That was not the case; only about ten people took advantage of the opportunity to see some free, live, excellent theater. In a cold church basement in Minneapolis, where the cast and crew outnumbered the audience, I witnessed TTT's usual bare bones, straight-to-the-heart-of-the-matter style of theater as applied to the classic musical about a con man salesman and the small Iowa town forever changed by his visit. In one word, it was spellbinding. This ensemble of wonderful actors led by Luverne Seifert cast their spell over me just as Professor Harold Hill cast his spell over the people of River City. And this was just a dress rehearsal! It was already nearly flawless (and the rare miscue only added more entertainment value in the hands of these professionals), so I can only imagine that the full production (running Feb. 14 through Mar. 9 at Open Book) will be a thing to behold.

Luverne Seifert is an absolute charmer as Professor Hill, as he easily wins over the town with his smooth-talking, and stern Marian the librarian a little less easily. Aimee Bryant conveys Marian's strength of character and longing for something more, and lends her lovely voice to such songs as "Goodnight My Someone." Dennis Spears is a delight as her mother (in a great example of TTT's color- and gender-blind casting, an African American man plays an Irish woman). Recently crowned Ivey Emerging Artist Ricardo Vasquez plays Marian's little brother Winthrop (whose lisp was made famous by little Ronnie Howard). Ricardo completely transforms into a ten-year-old boy, and not just any ten-year-old boy, but a sad, lost, troubled ten-year-old boy. When he begins to open up thanks to music and the band and friendship, it's a thing of beauty. Rounding out the cast as salesmen, townspeople, school board members, and dancing ladies are the very entertaining Bradley Greenwald, Jim Lichtsheidl, Sarah Agnew, and Kimberly Richardson.

The wonderful thing about musicals as performed by Ten Thousand Things is that because it's quite stripped down (just a two-person band in this case - Jake Endres on keyboard and Peter Vitale on a myriad of instruments), the music feels very organic to the characters and story. Unlike typical musicals in which there's a clear differentiation between full-blown musical numbers and straight dialogue, the actors flow naturally back and forth between speaking and singing, with the band subtly coming in to support them. The Music Man is a good choice for this sort of style, with it's rhythmic talky songs. The fast and lyric-heavy opening number on the train* ("you gotta know the territory!") is extremely well-done by the cast, as is "Ya Got Trouble," and everything with the barbershop quartet and gossiping ladies - the same four actors switching back and forth, often within the same scene! But my favorite moment is the most famous song in the show. How do you create the sound of 76 trombones with just two musicians? You don't even try, you do it as a soft, gentle, reverent plea. I was sitting a few feet from Luverne and could see the awe and wonder in his eyes as he softly spoke of this marvelous band, and I fell completely under his spell as much as the townspeople did. The speaking eventually becomes singing, with the musicians chiming in as it grows into the familiar big band song.

There's a reason The Music Man is such a classic. It's a beautiful story about the power of music, storytelling, family, friendship, community, and having a common goal. Professor Hill gives River City hope and something to strive for, and Marian's love and faith in him helps him become the man that she thinks he is. With direction by Lear deBessonet and choreography by Jim Lichtsheidl, this is a wonderfully unique and delightful interpretation of this familiar story. Ten Thousand Things productions are always extremely professional, yet retain a playfulness and laid back feeling that draw the audience in, whether that audience is prisoners or seasoned theater-goers. Mere words cannot express how much I love this show, and look forward to seeing it again at Open Book. It's playful and funny, sweet and touching. I'll be back to update after seeing the final version in a few weeks. In the meantime, reserve your seats for one of the three performances that are not sold out. Trust me, you are not going to want to miss this one!


*I once saw Bradley Greenwald perform the opening number by himself, and it was quite impressive!