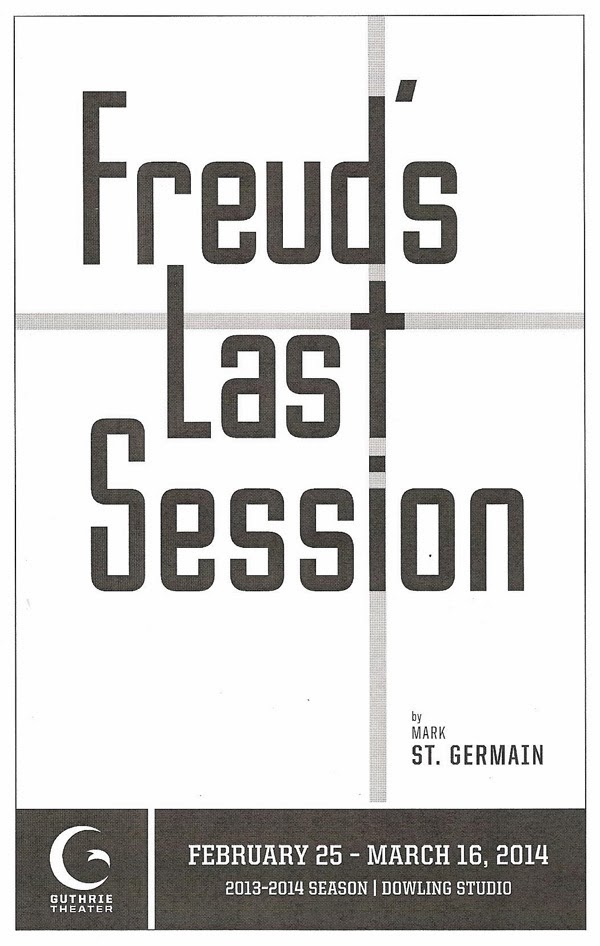 As a friend of mine once said, sometimes the best theater is two people sitting in a room talking. Freud's Last Session is perhaps the best example of this idea that I've ever seen. The two people in this case are Sigmund Freud and C.S. Lewis, two intelligent, eloquent, strongly opinionated men. The imagined conversation between the two of them plays out in real time, with neither actor leaving the stage for more than a brief moment. It's one long fascinating and brilliant 80-minute conversation that we get to listen to. Freud's Last Session was a hit Off-Broadway (where I saw it a few years ago) and is now playing in the Guthrie Theater's Dowling Studio. Brilliantly written and marvelously acted, it's just really great theater.

The play is set in 1939, when Freud (the founder of psychoanalysis and an atheist) is near the end of his life and in pain from advanced oral cancer. He is in exile in London, having been forced to leave his native Austria due to the rising threat of the Nazis. Lewis (perhaps best known as the author of the Chronicles of Narnia but also an accomplished author on the subject of Christianity) is teaching at Oxford and pays Freud a visit. What follows is a fascinating discussion of God, religion, sex, relationships, death, family, evil, morality, and myths. The war and Freud's impending death bring an immediacy to these theoretical issues, as the conversation is occasionally halted by air raids and Freud's increasing pain. Playwright Mark St. Germain has brilliantly constructed this conversation with facts from the men's life as well as their writing. And in the persons of Robert Dorfman and Peter Christian Hansen, Freud and Lewis come to life before our eyes.

There are only two flaws in this play. One, it's too short. I could easily spend another hour or two listening to Robert and Peter as Freud and Lewis debate the very essence of life. The other flaw is that it's impossible to watch both of them at once, which is perhaps more a flaw of human vision. I wanted to watch one's reaction as the other was speaking, but also wanted to watch the speaker at the same time. It's like watching a tennis match between two brilliant and equally matched players (or at least I assume that's what it's like, I don't watch tennis). I found myself nodding in agreement with one, and then the other, as they made their points. In the end it's clear that it's not about who "wins" the debate, it's about two people sharing their opposing viewpoints and gaining a better understanding of the other. Neither is swayed from their position, but they respect each other's opinion and try to understand it as they debate. How I wish people on opposing sides of arguments today could converse like Freud and Lewis do in this play.

The Dowling Studio looks completely different than I've ever seen it before, and also completely different from the last time I saw this play. The Off-Broadway set was a very realistic and lived-in study, with books and tchotchkes on every surface, like a cozy and cluttered professor's office. The set at the Guthrie is quite the opposite, more stark and fantastical than cozy and realistic. Everything in the set is black - the books are black, the figurines on the desk are black, the furniture is black, the floor is black, the radio is black. Prior to and after the show there is an odd otherworldly lighting and almost creepy haunted house sounds, although during the play the lighting is quite natural and you soon forget they're in a colorless world as the debate takes center stage. Director Rob Melrose explains in the playbill, "I imagined a production that dispensed with clutter and realistic details and allowed the focus to be on the great men and their ideas, almost as if we were ripping them out of time and space and bringing them to the Dowling Studio for our own edification." He also chose to position the long narrow stage between the audience on either side, so that we're surrounding the conversation and can see the audience on the opposite side. It's an interesting choice. (Set design by Michael Locher)

Freud's Last Session is a wonderful play, so smart, challenging, thought-provoking, moving, and even funny at times. It will thoroughly engage your brain and maybe even get you to think about your own life and beliefs a little. My friend and I stayed in the theater talking until we were kicked out of the space. It's that kind of play. If you like smart, thoughtful, well-written and well-acted theater, go see Freud's Last Session (playing now through March 16).