"The Ballad of Emmett Till" at Penumbra Theatre 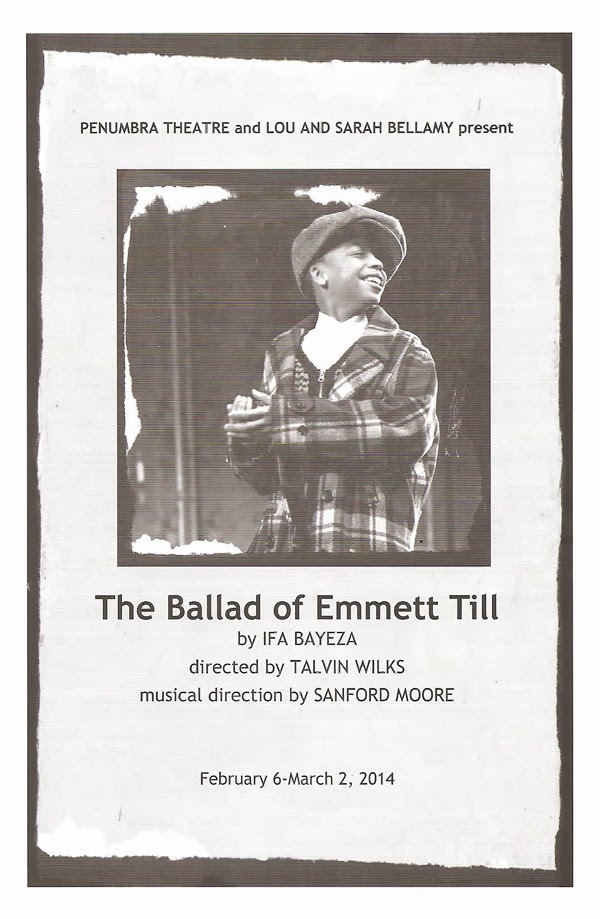 On what would have been Jordan Davis' 19th birthday (a black teenager who was killed by a white man because of events that happened outside a store where he was buying bubble gum), I went to see a play about Emmett Till. History repeats itself, and theater is there to tell the stories and speak the truths that cannot otherwise be told or spoken. And when it comes to African American history, which really is our shared history, no one does it better than Penumbra Theatre. The Ballad of Emmett Till is the story of a smart, funny, precocious 14-year-old boy from the South Side of Chicago with his whole life ahead of him, until one summer in Mississippi when he unknowingly violates the unwritten rules of the 1950s South - do not touch a white woman, do not talk to a white woman, do not look at a white woman. The light-hearted and music-filled play takes a turn into darkness when Emmett is kidnapped from his uncle's home in the middle of the night several days after "the incident," driven around in a truck to various locations, beaten, tortured, shot, and dumped in a river with a weight around his neck. A note in the playbill from Co-Artistic Directors Lou and Sarah Bellamy says it best:


We will not make the tragedy of this child's death easy for you. We will not stage gratuitous violence. We will not erase the flagrant racism of the environment that justified his murder. We will celebrate, with heavy hearts, the dignity and grace of a child who paid the price for our nation's tolerance of hatred and discrimination. It will be what you have come to expect from Penumbra Theatre Company, a frank and unflinching depiction of issues that urgently need our attention.

I admit I didn't know many of the details about Emmett Till's life and death (read more about it here), so it was quite educational for me. But this is not a dry and sober history lesson, it's an entertaining and captivating play, a celebration of life and family, with wonderful music (music direction by Sanford Moore). You almost forget the tragic ending looming over the story as you get to know these characters and share in their life and family. But it all comes crashing down when Emmett is taken, and we see scenes of the torture, Emmett's mother's reaction, the trial and its aftermath.

At the center of this wonderful six-person ensemble is Darrick Mosley, who plays Emmett with great spirit and energy. Shá Cage and Greta Oglesby play the women in Emmett's life with strength and sympathy. H. Adam Harris, T. Mychael Rambo, and Mikell Sapp play multiple roles from amusing to threatening, including the two men who kidnapped and beat Emmett. Playwright Ifa Bayeza writes in such a way that there are sometimes multiple versions of a character onstage, so that we can more clearly see the different sides of them. In one particularly moving scene, we see two mothers testifying at the trial and grieving their son in different ways, one the strong and farsighted woman who insisted on an open casket, which became a spark in the Civil Rights Movement, one the emotional woman witnessing the mutilated body of her baby.

The simple but effective set (by Maruti Evans) consists of a raised platform in the center of the stage, and wooden planks on the walls upon which are written the words of the murderers who, after being acquitted of the crime and therefore protected by double jeopardy, admitted that they killed Emmitt in an interview with Look magazine. It's quite sobering to watch Emmitt's story play out surrounded by those hateful words.

The Ballad of Emmett Till is a beautiful, tragic, spirited, and very well-done play. Emmett's final words to the audience are, "Is it done?" That is a question to ponder. (Playing now through March 2 at Penumbra Theatre.)