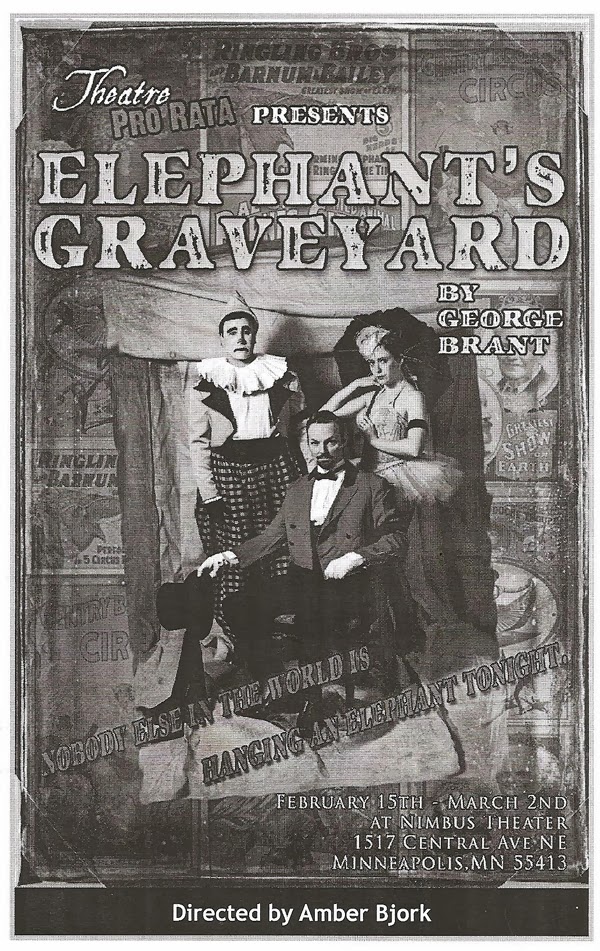 The play Elephant's Graveyard is one of those "truth is stranger than fiction" stories. In 1916, a five-ton circus elephant was hung in the town of Erwin, Tennessee after killing a man. You read that right - they hung an elephant. Theatre Pro Rata's production of the play tells the story so vividly that it's absolutely horrific. By that I don't mean that it's a bad play, on the contrary it's so good at telling this tragic story that as an animal lover, it's almost unbearable. I'm not sure I could use the word enjoyable for the experience, but it's a completely captivating and fascinating look at a bizarre historical incident with larger implications about the way that we have historically treated and continue to treat animals (and other second-class citizens) in this country.

The play is written as a series of monologues, in which circus people and townspeople take turns telling the story directly to the audience. They take us through the excitement of a circus coming to a small town, the unique lives of circus performers of that era (see also the bizarre and wonderful HBO show Carnivàle), and the horror of the hanging. It's like one long story being told by multiple people. I don't think think I've ever seen a play with so many characters in which they never talk to each other. It's an effective storytelling device and lets us get inside the heads of all of the characters to learn how they view the event, whether it's as the triumph of the American spirit, or a business failure, or the death of a true friend, or a similarity to the other lynchings happening in the South.

This is a true ensemble piece. There's no main character (other than Mary the elephant, who looms large even though we never physically see her or any representation of her), rather each of the 13 actors and two musicians share the spotlight equally, including Wade A. Vaughn with an electric performance as the ringmaster, Neal Skoy as Mary's heartbroken trainer, and young Jillian Jacobson representing the children of Erwin.

Adding greatly to the mood of the piece is the period appropriate music by Theo Langason on guitar and Shannon Foy on percussion. The cast also occasionally adds its lovely voices to the music. Particularly noteworthy are a haunting duet between Joy Dolo's townsperson and Emily Dussault's Ballet Girl, and Ethan Bjelland's preacher song.

The story takes place on a completely bare stage, with only a bench as an occasional prop/set piece, and lights evoking a big top. This really allows the audience to focus on the descriptive language and the images it evokes in our minds. The colorful costumes also stand out in this bare environment, from the red coat of the ringmaster and the green of the ballet girl, to the more drab colors of the hardworking townspeople (costumes by Mandi Johnson).

Elephant's Graveyard is my first experience with Theatre Pro Rata, and I like what I saw. It's storytelling at its best - completely captivating and so vivid that you feel like you're actually seeing the events play out, which in this case can be painful. Playing now through March 2 at nimbus theatre.